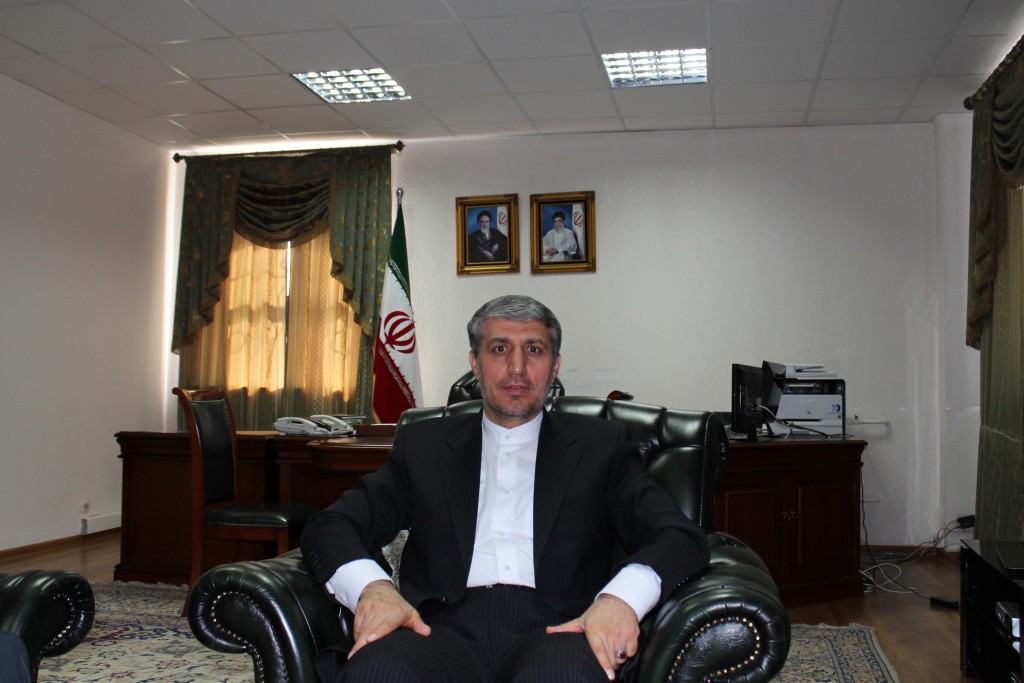 ASTANA – Headlines with the word “oil” often steal clicks these days, especially in oil-exporting Kazakhstan, as commodity prices and its national currency are directly correlated with global crude oil prices. Now, another headline-making word and nation has become especially important for Kazakhstan: Iran.

Ambassador of Iran to Kazakhstan Mojtaba Damirchiloo, in an exclusive for this story, shared his thoughts on why Iran is an important strategic partner for the Central Asian country, what is expected from bilateral cooperation between Iran and Kazakhstan, how his country coped with the challenges of international sanctions and provided his forecast for crude prices.

On the latter, Damirchiloo admitted that no oil-dependent country would benefit from falling oil prices.

“Current oil prices harm all producers, including Iran and Kazakhstan. The oil price has fallen by more than four times since June 2014, when it was $115 a barrel. It is now [around] $30. This comes after nearly five years of stability,” he said, referring to the early February crude prices.

“The major oil producers have done nothing to cut production since October 2014, and they are unlikely to consider cutting output any time soon. [The] major Organisation of Petroleum Exporting Countries (OPEC), which controls nearly 40 percent of the world market, and non-OPEC producers, have different reasons to continue high output. Lower growth, coupled with lower need for oil, is not going to exceed supply for a long period of time. Thus the oil price is not going to rise anytime soon.”

The ambassador explained that overproduction by “some OPEC and non-OPEC producers” by 2.5 million per day has caused an excess in the oil market.

“Historically, OPEC would intervene to strike a balance between supply and demand when there was excess oil in the market. At the latest meetings of OPEC, Iran asked members to reduce production and respect the ceiling, but OPEC failed to reach an agreement on production curbs, sending the price tumbling. There is political will behind OPEC’s indecision over a production ceiling in the organisation, and certain countries’ insistence on overproduction is politically motivated. In this regard, the necessity of cooperation and coordination between the exporting and consuming countries in order to have a balanced market, in which continued supply and demand will be secured, is inevitable.”

According to the ambassador, the current situation will draw Kazakhstan and Iran closer.

Going further, Damirchiloo touched upon some of the areas of cooperation between Kazakhstan and Iran that could be improved. Tourism is one such area.

“In the case of Iran and Kazakhstan, despite having [a] wide variety of commonalities and high potential, the current level of cooperation in the field of tourism is not satisfactory and we have to do a lot,” he admitted.

Iran, with attractive natural and historical sites, is rated among the 10 most touristic countries in the world, Damirchiloo said, adding that “Iran could be an attractive destination for Kazakhs, as it was for the more than 6 million tourists that visited Iran last year.”

“We can say the same for Kazakhstan. Kazakhstan could be [an] attractive place for Iranians. Tourism can play an important role in Iran-Kazakhstan relations. Of course, it requires some preconditions, including introducing the tourism potential, facilitating connectivity, visa regime simplification, et cetera. Regarding a visa-free regime, Iran is ready to consider it on mutual agreement,” he stressed.

Recently, the two countries agreed to establish new direct flights in addition to the existing two weekly flights by Mahan Air to Tehran from Almaty, the ambassador said.

“Now in the post-sanctions era, at the first step we have the issue of revival of the stalled or pending projects on the agenda and in the second phase, trying to define and implement new ones at the bilateral and multilateral levels and increasing trade turnover. We do hope to expand our cooperation in the fields of mining, agriculture, agribusiness, construction, energy, tourism, transportation and transit.”

Coming out of the shadow of sanctions

“Iran, during the last three decades, has been under severe sanctions, beginning from the time of the triumph of the Islamic revolution in 1979, which resulted in the collapse of the authoritarian political system in Iran and the establishment of a democratic political system based on Islamic values,” Damirchiloo said.

However “the experience of sanctions proves that they have not reached their goals, because there are numerous ways to deter them. Of course, they create problems, especially for ordinary people, by increasing their expenses,” the ambassador explained.

With sanctions lifted, Iran is looking to a new era and will seek to expand its non-oil sectors.

“Iran’s non-oil export has shown noticeable growth in recent years. The composition of Iran’s non-oil export [has shifted] from primary and agricultural products to more processed goods, particularly petrochemical and other industrial products. Iran has a major competitive advantage in all industries that rely on gas, and related exports are on the rise. However, exports in the service sector (especially the export of engineering services) are also growing.”

Key sectors that have the potential to contribute more to the country’s economic income and export performance are “gas-based industries [like] petrochemicals, cement, steel and the power generation sector; agricultural and industrial food products, especially Iranian pistachios, fruits [and] fisheries; and high-tech based industries including medicine, transit, tourism and handicrafts, especially Iranian carpets.” Iran is also focusing on renewable energy, which, in the context of the EXPO 2017 exposition, draws another parallel between the two countries.

On Feb. 11, Iran will celebrate its national day with events around the world and in the Kazakh capital.