Spain Too Strong for Kazakhstan in Futsal Euro 2016 Semi-Final

By By Anuar Abdrakhmanov in Sports on 13 February 2016 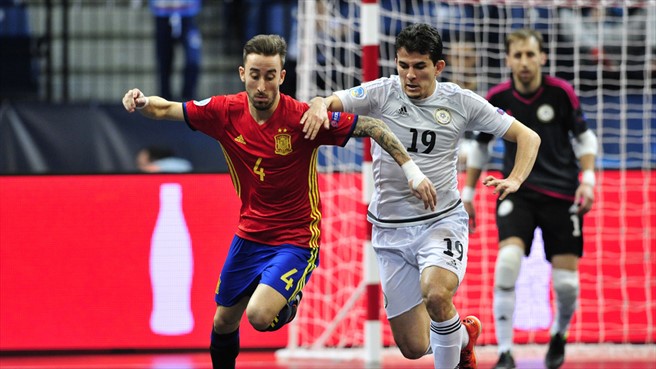 Who would have thought before the tournament that the Kazakhs, debutants in the European futsal elite, would reach as far as the top four? The team has been a major sensation and the victory in the quarterfinals against Italy, the reigning champions of Europe, has already turned into the key success in the history of Kazakh futsal. The players took these positive emotions into the semi-final meeting, knowing the Spaniards were the stronger side but trusting in the quality and character of their team.

Heading into the most important match in its history, the team, led by 44-year-old Brazilian Cacau, was missing two major components. Goalkeeper Higuita was suspended for arguing, while trauma knocked out Chingiz Yessenamanov, another of the team leaders. Higuita’s replacement, Gregory Shamro, at times acted in exactly the same manner as his colleague, often going forward to help the field players. 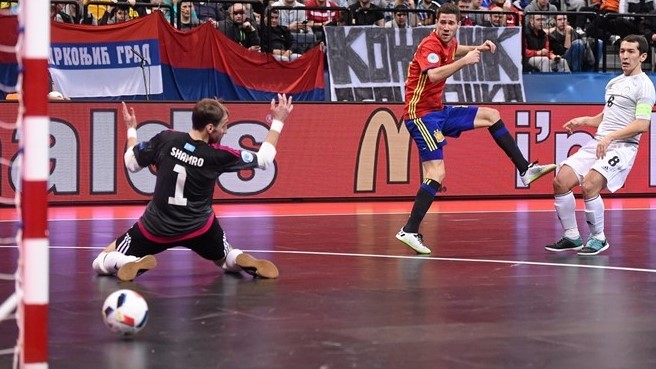 Kazakhstan started aggressively, leaving viewers impressed with the audacity of the contenders. In the fourth minute, the team scored first. After an interception in the centre, Douglas Jr. raced forward and provided a transfer to the far post, where it only remained for Alexander Dovgan to take it to the net for the score. Unfortunately, the lead did not last. In the eighth minute, the Spaniards earned a corner. Bebe volunteered to serve and Shamro blocked the strike, but Bebe joined the attack’s second wave to send the ball into the goal for a 1-1 tie.

The Spaniards’ onslaught became harder and the Kazakhs failed to check the tie score in the first half. Two of the Spanish attacks eventually resulted in goals by Miguelin and Raul Campos and turned the score to 3-1.

Cacau took more risks in the second half, including active use of the fifth field player. In first minute, it seemed the tactic would produce the hoped-for result. Strikes from Leo and Serik Zhamankulov were good, but were not able to reach the goal. An emphasis on attacks kept opening free space in the team’s defence. The opponent capitalised on the situation at 26 minutes, while Kazakhstan was in attack with all six players involved. Catching the ball, Alex sent his long-range shot into an empty net to bring the score to 4-1. Overcoming such a lead seemed impossible at this level. 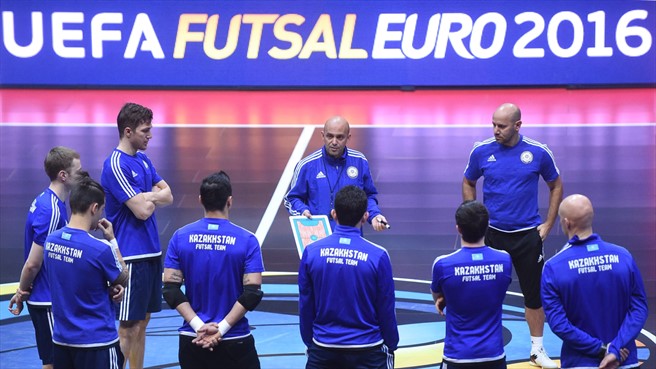 Cacau’s team continued to prove their key quality of never giving up and managed to reduce the deficit. In the 36th minute, Leo, dressed in a goalie jersey, converted Mikhail Pershin’s assist into the net to make it 4-2. After a few moments, Kazakhstan again surprised the audience. In the 38th minute, Zhamankulov, one of the contenders for the tournament’s Golden Boot award, exploited the Spanish goalkeeper’s mistake, closing the gap to 4-3. Very little time remained. The last point in the game, however, was left for the Spaniards. Campos scored for the second time and fixed his team’s 5-3 victory.

Kazakhstan will play in the Feb. 13 match for third place against tournament host Serbia.