By Staff Report in Nation on 2 February 2016

ASTANA – The Nationwide Social Democratic Party (NSDP) ruled during its congress on Jan. 30 in Almaty that the party should seek participation in Kazakhstan’s early parliamentary election set for March 20. 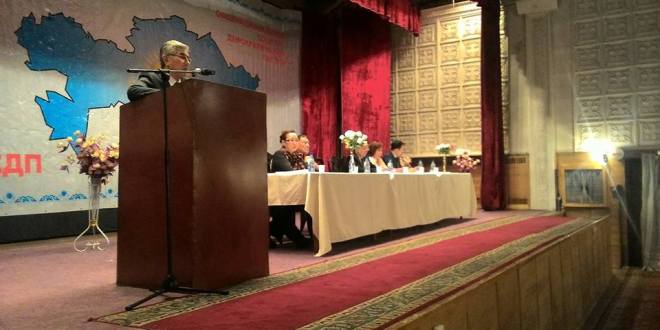 The decision was approved by a clear majority of 127 out of 135 delegates of the congress, NSDP Chairman Zharmakhan Tuyakbai announced, according to vlast.kz.

The decision was preceded by a wide intra-party discussion, review of the issue on the party’s political council as part of the Nationwide Civil Society Meeting, the party leaders said. The meeting of a number of NGOs that favoured the NSDP’s participation took place a day prior.

The party should use the election campaign as a platform and opportunity to reach wider audiences with its political programme of change, the speakers at the congress said. Among them were former members of the Mazhilis and Senate Serikbolsyn Abdildin, Ualikhan Kaisarov and Zauresh Battalova, former Vice-premier Baltash Tursymbayev and human rights lawyer Yevgeni Zhovtis.

The list of NSDP candidates to the Mazhilis (lower house of Parliament) approved by the congress features 28 names, including the party chairman. Zharmakhan Tuyakbai was the chairman of the lower house of parliament in 1999-2004 and unsuccessfully ran in the presidential election in 2005.

Created in 2006, the NSDP twice participated in parliamentary elections, failing on both occasions to surpass the 7-percent threshold for parties to enter the Mazhilis (4.54 percent in 2007 and 1.68 in 2012). Since November 2015, the party has been a full member of Socialist International.