By Staff Report in Nation on 5 February 2016 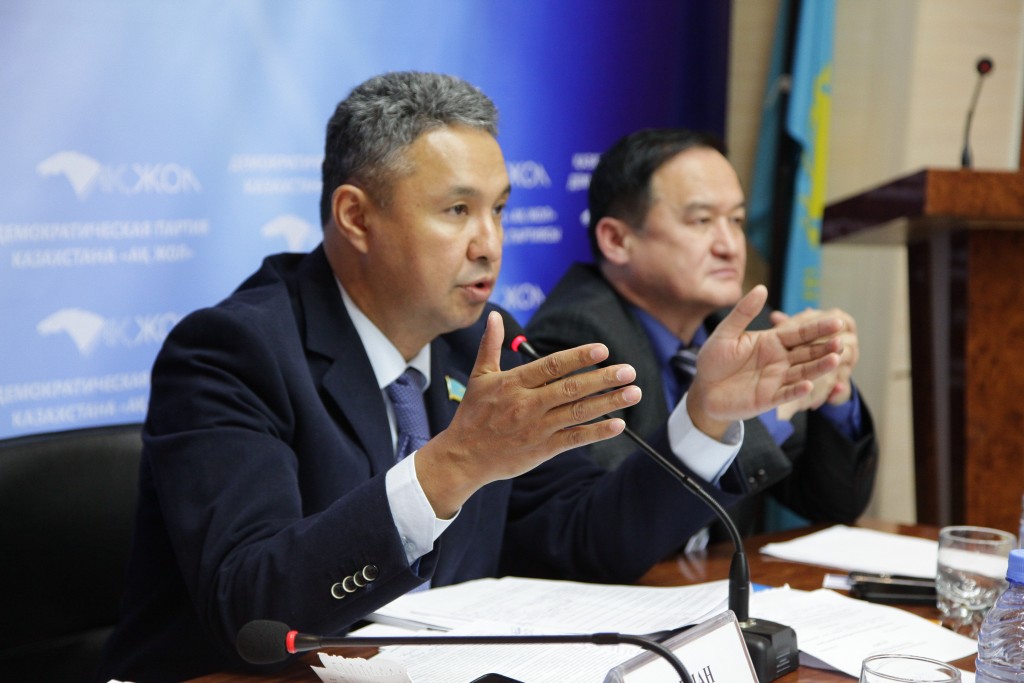 ASTANA – The Ak Zhol (Bright Path) Democratic Party of Kazakhstan approved a list of 35 candidates during its Feb. 3 congress. The slate will run in the March 20 early parliamentary election for seats in the Mazhilis (lower house of Parliament).

Party chairman Azat Peruashev urged “pragmatism” and not nurturing “exaggerated expectations” to increase the presence Ak Zhol won four years ago. The party received 7.47 percent of the popular vote in 2012 and was subsequently allocated eight mandates in the lower chamber. Ak Zhol also won two seats in 2004 when only ten were up for grabs for party lists, with the rest contested by individual candidates.

The party’s main goal this time should not be chasing an “unrealistic” 20 or 30 mandates, but rather consolidating its position in Parliament, added Peruashev. A simple repetition of the previous result would prove the past successes were not accidental and that the party had a stable foundation based on its own core of support among the voters, he argued.

The list of candidates included all eight Ak Zhol representatives in the previous convocation, including Peruashev, as well as fresh faces from business and academia. The chairman noted the party would not hold a “campaign of charm” involving celebrities, adding its run will be “active but decent, with no extra costs.”

“One of the reasons we did not invite any of them is [that we face] inflation and difficult conditions in general, when making a show out of our election campaign would be a mistake, an unnecessary irritant, which gives the opposite effect,” he said.

The congress also approved “Time to Work,” the party’s new 10-point electoral platform. Among the key provisions, Ak Zhol promises to continue prioritising the interests of small and medium business in the legislature, as well as promoting further expansion of the entrepreneurship spirit among wider segments of the population. The platform also proposes improving the quality of the academic programme in schools and introducing an option for graduates to pass university entrance exams while skipping the currently mandatory Unified National Testing.

Additional priorities include increased executive transparency and accountability, a consolidated struggle against corruption and judicial and legal reforms.

“Our primary duty is to direct our intellectual and political resources to the development and implementation of urgent steps needed to address the impact of the global crisis on the national economy and business; protection of national interests and enterprises from [the negative effects of] the reduction of turnover; job cuts; protection of people from the threat of job loss, loss of revenue and even mass poverty,” according to the platform.

“A strong state is impossible without development of the economy and competitive business and business now is in dire need of our support,” said Peruashev.