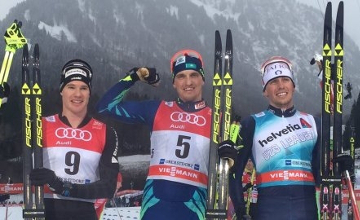 Poltoranin beat three-time Olympic Champion Swiss Dario Cologne to win the race only by +0.1 in a very tight finish during stage five in Oberstdorf, Germany on Jan. 6.

“I had a great race,” Poltoranin said after the race as quoted by FIS. “I am happy, I am the first guy this winter to beat Martin [Johnsrud Sundby] in a distance race. I hope for top 10 in Toblach and I will fight for the third place in the Tour de Ski.”

Norwegian Martin Johnsrud Sundby, who, in spite of having a terrible stage five, retained his first position overall.

“I had a terrible day. I lost many seconds. I have to look forward to the next day and try to have a better day on the next stage,” he told the media.

Sundby went on to earn one second place and two wins going further into the World Cup stages and stays on top overall ahead of Finn Haagen Rogh, his fellow countryman, and Russian Sergey Ustiugov.

Poltoranin is in the fifth place overall, the next stage will take place in Planica, Slovenia on Jan. 17.