ASTANA – On Jan. 22, Kazakhstan received a note from Latvia formally confirming its participation in EXPO 2017. 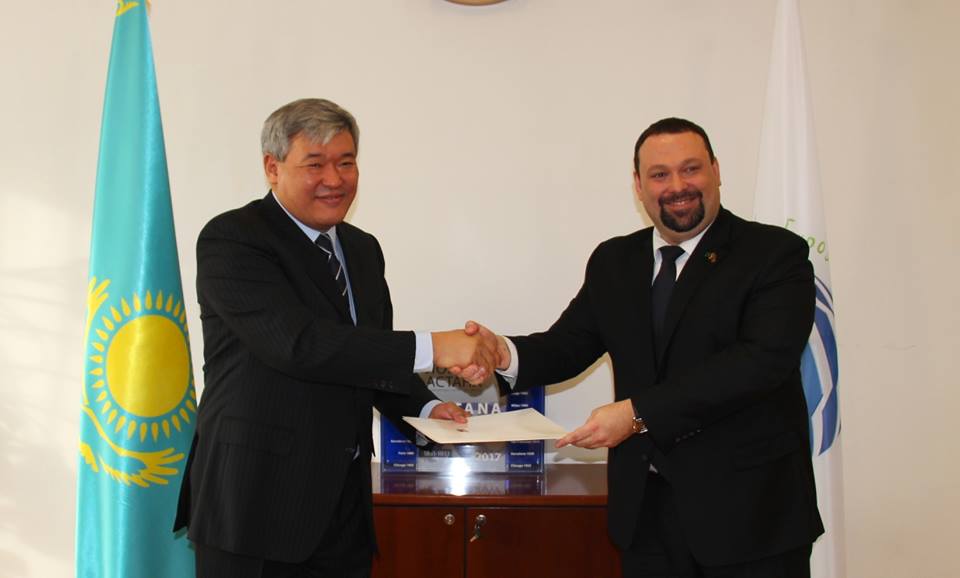 At the meeting, Zhoshybayev updated the ambassador on progress with practical preparations for the exhibition and highlighted a wide range of opportunities for Latvian business in this regard.

In turn, Pogrebnaks noted that Latvia was not a member of the International Exhibition Bureau and has only participated in an expo a few times. Thus, he said, confirmation of participation in Astana EXPO 2017 proves great interest and the special friendly relations of Latvia and Kazakhstan.

Earlier, in April 2015, Commissioner Zhoshybayev visited Riga and was received by the then President of Latvia Andris Berzins. The sides acknowledged a good dynamic of bilateral cooperation and discussed a number of common tasks that could help develop them further. President Berzins welcomed the importance of the exhibition theme and its relevance for all countries.

Latvia is reportedly interested in expanding cooperation with Kazakhstan in developing green energy projects, including in management of water recourses. The Baltic nation is considered one of the most eco-friendly countries in Europe. The renewables’ share in energy consumption of Latvia reaches 37.1 percent and that is the second best result in the European Union after Sweden (52.1 percent).

For Kazakhstan, it is of special importance that Latvia is going to be involved in EXPO since it was also one of the first countries that supported President Nazarbayev’s Green Bridge initiative, signing the relevant charter. During its presidency in the Council of the European Union, Latvia paid special attention to promoting green economy and eco-friendly technologies. To this end, it hosted the Green Bridge Forum 2015: Building the Bridge to Clean Technologies between European and Central Asia Countries that brought together about 300 delegates from 21 countries and served as a vehicle for promoting sustainable energy development. The relevance of the Astana EXPO was also noted last week in Davos, Switzerland. On the margins of the World Economic Forum, Manuel Salchli, commissioner for the Swiss pavilion at EXPO 2017, and Akhmetzhan Yessimov, chairman of the EXPO 2017 national company, signed the formal agreement on Switzerland’s participation.

As Salchi noted, the event in Astana would be a great opportunity for Switzerland to show development of energy efficiency and green technologies in the country. The EXPO 2017 theme – Future Energy – is very timely and important, according to him, as issues of energy efficiency and alternative energy development are constantly growing in relevance for the whole world.