By Kamila Zhumabayeva in Business on 12 January 2016

ASTANA – Kazakh Prime Minister Karim Massimov concluded his December 2015 visit to China by launching the first container train on the nation’s Lianyungang route, which continues through the territories of Kazakhstan, Russia and Belarus and ends in Duisburg, Germany, Kazakhstan Temir Zholy (KTZ) reported Dec. 14 on its website. The project is one of the key undertakings in Kazakhstan’s New Silk Road state programme and Nurly Zhol new economic policy. And it also fits perfectly with China’s own Silk Road Economic Belt programme announced by President Xi Jinping 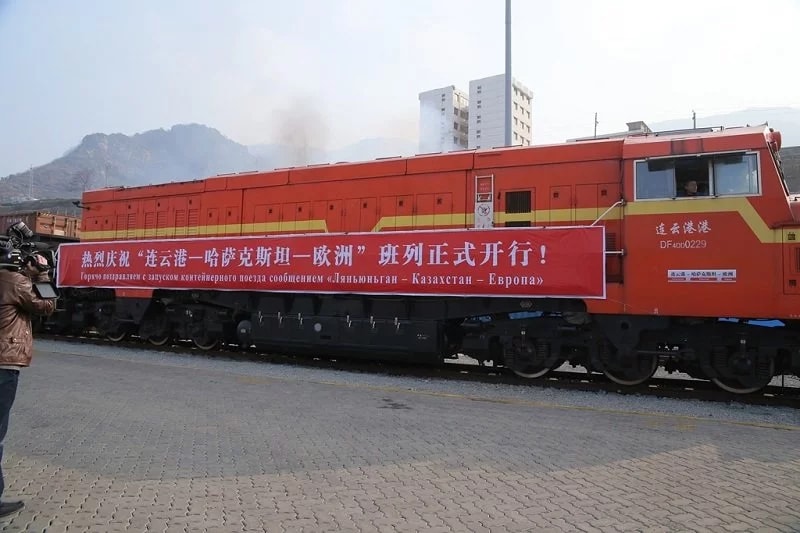 During the visit, the Prime Minister and Jiangsu Province Governor Shi Tayfen were familiarised with the work of the joint venture, the Kazakh-Chinese logistics terminal in the Lianyungang port, according to KTZ. The current production activity on consolidating and processing goods was demonstrated to the distinguished guests, as well as opportunities for automating the control processes and monitoring all operations both in the terminal and along the route.

More than 190,000 containers have been processed since the terminal began operation in July 2014. Regular container service has been initiated on railway routes to Kazakhstan (Almaty), Central Asia (Tashkent) and the Caucasian region, the company reported.

Three container trains, with an increase to five, are expected to run each week beginning in 2016. By 2020, the organisational index of container trains in the direction of Kazakhstan and transit to Europe, Central Asia and the Caucasus will reach 1,827 trains.

Lianyungang, an Eastern harbour of the Great Silk Road, is one of the 20 largest ports in the world. For Kazakhstan, it is one of the strategic units overseas, as it ensures the efficient development of the country’s transit and transport potential, according to Kapital.kz.

The Lianyungang port ensures cargo traffic in the direction of the Dostyk-Alashankou border crossing from countries of South East Asia and south of China to Kazakhstan, Central Asia and Russia. The port transships more than 150 million tonnes of cargo a year, reported KTZ.

The negotiations in China included prospects of further expansion of beneficial cooperation in the trade, economic, transport and logistics fields and in particular, and the increase in freight traffic through the Kazakh-Chinese logistics park, according to Kazinform.