ASTANA – The International Committee of the Red Cross (ICRC), the Japanese Embassy in Astana, the Ministry of Foreign Affairs of Kazakhstan and the Kazakh Humanitarian Law University (KAZGUU) organised a roundtable at KAZGUU in Astana on the humanitarian consequences of nuclear weapons on Nov. 30. 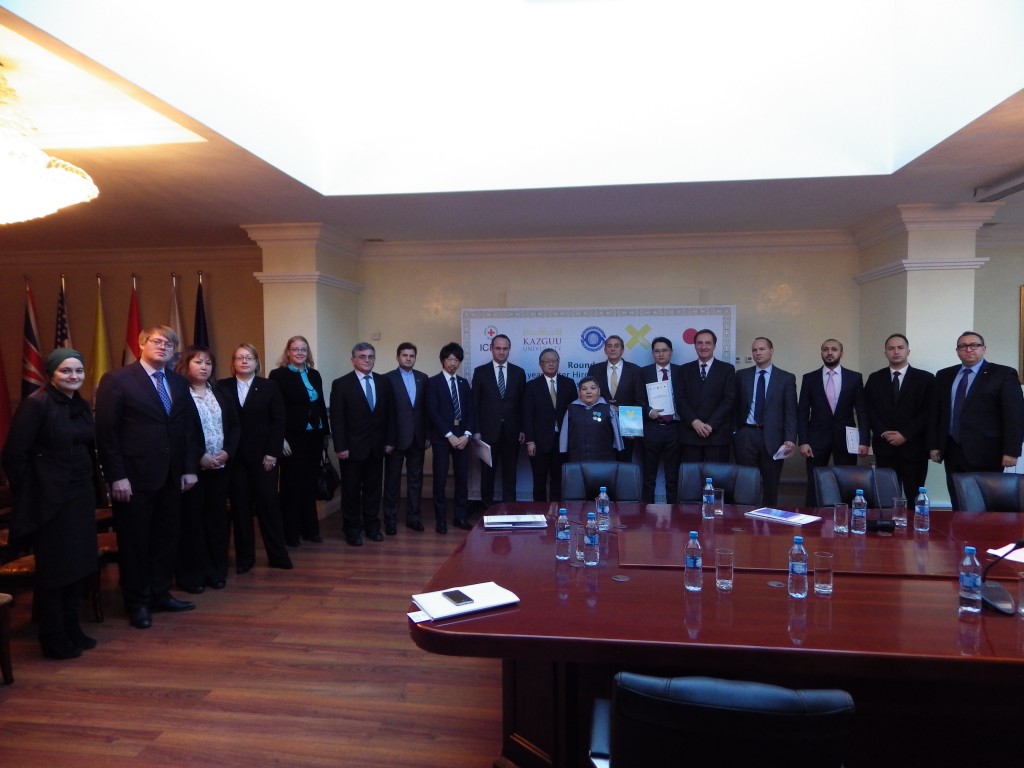 At centre, Ambassador of Japan to Kazakhstan Masayoshi Kamohara, Honorary Ambassador of The ATOM Project Karipbek Kuyukov and head of the ICRC Regional Delegation in Central Asia Jacques Vilettaz at the roundtable on the humanitarian consequences of nuclear weapons in Astana Nov. 30.

Diplomats, experts and government officials shared information about the latest trends in nuclear disarmament processes and discussed joint approaches to this issue. An exhibition of paintings and historical photos was also presented during the event.

“This year marks the 70th anniversary since the atomic bombings of Hiroshima and Nagasaki. For Kazakhstan, next year is the 25th anniversary of the closure of the Semipalatinsk nuclear test site. I greatly appreciate that in this very remarkable year, the ceremony to commemorate victims of the atomic bombings was held in Astana this August,” said Japanese Ambassador Masayoshi Kamohara.

Kamohara noted that both states share the common experience of suffering as a result of nuclear weapons and cooperate towards nuclear disarmament and non-proliferation. He explained, “This September, the foreign ministers of Japan and Kazakhstan were entrusted as Co-Presidents of the Ninth Conference on Facilitating the Entry into Force of the Comprehensive Nuclear-Test-Ban Treaty (CTBT). Japan and Kazakhstan have now the common commitment to take the utmost actions for the entry into force of the CTBT and realise a world free of nuclear weapons. In this regard, the joint statement on the CTBT, which was signed last month by Prime Minister of Japan Shinzo Abe and Kazakhstan President Nursultan Nazarbayev has great significance.”

“Kazakhstan can share Japan’s pain like few others. Almost 500 soviet nuclear weapon tests were conducted within our territory. The legacy is a huge contaminated area around the Semipalatinsk nuclear test site. As many as 1.5 million people have suffered and died because of radiation. Cancers and fertility problems will continue to affect future generations in decades to come,” said Askar Abdrakhmanov on behalf of the Committee for International Information at the Ministry of Foreign Affairs of Kazakhstan.

Abdrakhmanov emphasised the decision of President Nursultan Nazarbayev to shut down the Semipalatinsk nuclear test site and, shortly after independence, give up from the fourth largest nuclear arsenal in the world.

Head of the Political Section of the Japanese Embassy Taro Furubayashi discussed how he visited the Hiroshima peace memorial on Aug. 6, the date when the atomic bomb was dropped in the centre of Hiroshima, saying, “Many people gathered by the riverside close to the Atomic Bomb Dome, and made paper lanterns, in which was written their hearty hope for peace. They lighted the candles in the lanterns and floated them down the river. It was an amazing and touching sight. But just look back at the 6th of August, 70 years ago. It was 8:15 in the morning. The first atomic bomb in human history was dropped there. Many people suffered serious burns by hot blasts and dived into the river to escape the heat of flames. There were a lot of dead bodies at the water’s edge. The atomic bombs that were dropped in Hiroshima and Nagasaki took away more than 200,000 precious lives in a blink of an eye.”

Furubayashi highlighted that Japanese Foreign Minister Fumio Kishida was born in Hiroshima and emphasised that he has special feelings for the nuclear disarmament issue, making the most of opportunities to appeal to the world leaders to visit Hiroshima and Nagasaki.

“My mission and my fight started a long time ago, when I was born in Egyndybulak village, which is situated 100 kilometres from the Semipalatinsk nuclear test site,” said Honorary Ambassador of The ATOM Project Karipbek Kuyukov speaking through an interpreter. “Many children were born with deformities and defects. Before me my mother gave birth to two children who didn’t live to be one year old. You can imagine her shock when I was born without arms. Facing all the challenges, I couldn’t stand by and I started my activity in 1989 with the Nevada-Semipalatinsk project

“This roundtable makes us closer to our goal. I think that the future of our children is in danger. Imagine what may happen if nuclear weapons fall into wrong hands – into the hands of terrorists. I am very happy to see young people here, because our future is in your hands. I hope the experience you have gotten here today will serve you one day. Speaking on behalf of all victims of nuclear testing, I want my generation to be the last generation to bear the effects of this monstrous evil,” Kuyukov concluded.

An exhibition of Kuyukov’s paintings and ICRC photos was visited not only by all participants of the event, but also by hundreds of the university’s students, who then discussed the issue.