ASTANA – Kazakh President Nursultan Nazarbayev delivered his annual State of the Nation address Nov. 30 in the capital’s Palace of Independence. In his speech, the head of state focused on measures to overcome global crises and outlined changes in the financial system and fiscal and social policy, adding that Kazakhs will have access to free vocational training starting in 2017 and calling on the population to live within their means. 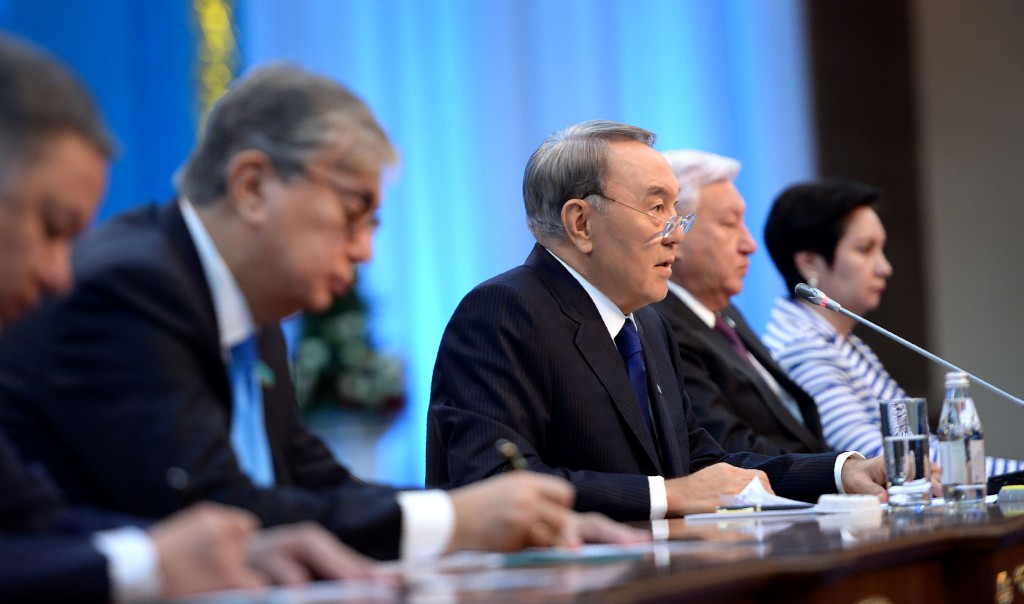 “In just a quarter of a century, Kazakhstan managed to become a sovereign national economy included in global economic connections and a state that has become a full participant in the global family of nations. We endured many trials together, steeled and strengthened. We have reached economic development never seen in our history before… Now the world is changing rapidly. There comes a different era. We see a new global reality with different opportunities and risks. Today, Kazakhstan’s economy is affected by a number of external factors caused by the collapse in world markets. The origin of the global crisis does not depend on us. No one is immune from the effects of global crises,” said Nazarbayev.

The main ideas of the address – growth, reforms and development – outlined Kazakhstan’s position in the new global reality. The President stressed that the nation needs to restore a level of economic growth that will raise it to among the 30 most developed countries in the world.

“We need to find new internal sources of growth via the disclosure of private initiative,” he said, adding that reforms will support stability in the economy, society and the state. “We need a deeper reform of the state and corporate management and financial and fiscal sectors.”

The most significant factor of development is the continuous modernisation of all spheres of society, the President said.

“We are working on a large-scale transformation of state, public and private institutions on the principles of the Society of Universal Labour [a concept the President outlined in 2012], high social responsibility and targeted assistance to the most vulnerable segments of the population,” he added.

The head of state stressed the importance of education and professional skills development, saying “technical and vocational education should be a major focus of investment policy.”

Social policy was also one of the themes of this year’s speech.

“For many years economic growth allowed us to pursue an active social policy, to improve the quality of life of people … Despite all the difficulties that our economy has suffered from the negative impact of all global crises, we have always improved the welfare of the Kazakh people. In 10 years, government spending in the social sphere rose by almost three times in real terms. The number of people employed in the social sector and in public administration is more than 1.2 million. The state provides a large amount of benefits and payments. Over 1.5 million citizens receive them,” said Nazarbayev.

“Today, I set a new challenge to develop a new social policy… State-targeted support will be provided only to needy citizens based on an assessment of their real incomes and living conditions. All others must earn by working. Taking into account the special needs of certain categories of our citizens, we need to set different amounts of living wages with the revision of its structure,” said the President.

“State support for those who can work will be provided only on the basis of their participation in retraining and employment programmes. I instruct the government to implement these types of social assistance starting in 2017. The priority of the state in social policy should be the massive investment in human capital. We must continue to modernise education and health in accordance with previously adopted programmes. I declare that in 2017 we will start a new project of free vocational education for everyone,” he added.

Nazarbayev spoke of the necessity to ensure the effective functioning of the financial sector under a floating tenge exchange rate, stressing the national currency will no longer be supported by interventions from the National Bank. Within inflation targeting, the National Bank will need to reduce inflation to 4 percent in the medium term, which can be reached using a flexible interest rate.

The National Bank will also be required to conduct stress testing of all banking sector subjects on nonperforming loans. Banks that are unable to solve the problem of capitalisation must “leave the financial system,” the President said.

In 2016, pension assets will be transferred to management by private Kazakh and foreign companies. The pension fund, Fund of Nonperforming Loans and other financial institutions will be withdrawn from the National Bank’s control.

“To live within one’s means” was named as a principle and a proper model of budget policy in terms of the global crisis. The President said tax rates will not be hiked, even after tax revenues fell by almost 20 percent, value-added tax (VAT) amounts by 25 percent and revenues from corporate taxes by 13 percent.

“Raising taxes is not the way out of this situation. It will only mean additional pressure on business,” said the head of state. It would be short-sighted to use the National Fund’s reserves to cover the budget shortage and the policy must be stopped, he said, except for one annual guaranteed fixed transfer.

The country’s tax system will face some changes in 2017, including the introduction of a new sales tax instead of the existing VAT. All ineffective tax incentives will be cancelled and the President instructed the government to conduct a full audit of all budgetary programmes.
“In a crisis, every tenge is important,” he added.

The work of national holdings was also criticised.

“Samruk Kazyna and KazAgro control huge assets in the country’s industry and agriculture ineffectively,” said Nazarbayev, adding that KazAgro and Baiterek have become inefficient intermediaries between the budget and banks. The government was instructed to develop a new privatisation programme to include all entities owned by the state, including those under Samruk Kazyna, Baiterek and KazAgro.

The President emphasised antimonopoly activities should be strengthened, artificial price control must be eliminated and processes of bankruptcy and rehabilitation of inefficient companies should be regulated. He also spoke to the country’s entrepreneurs.

“I want to address the business class, all wealthy Kazakhs and all business people. The state provides unprecedented measures on privatisation and economic liberalisation. The country has already given many of you an opportunity to earn and be on the front pages of business magazines. I urge you to actively participate in the legalisation of capital and privatisation bids. You will help yourself and Kazakhstan, all our people,” he said.

He also underscored that Kazakhstan will be looking to attract major multinational corporations to its privatisation drive, bringing up the examples of Chevron and ExxonMobil, who came to the country in its early years of independence and brought with them new technologies and business practices.

Nazarbayev further noted the importance of focusing on export niches in the global and regional markets.

“We should effectively use the economic potential of neighbouring countries. First of all, these are China, Russia, Iran, Mongolia, India, Pakistan, Central Asia and the Caucasus. These countries annually import goods and services in the amount of more than $3.5 trillion. It is necessary to conclude free trade agreements of the Eurasian Economic Union with key regional markets,” he said.

All projects included as part of the address are supported with funds totalling 7.2 trillion tenge (US$23.4 billion), the President announced.

The head of state mentioned his visits, cooperation and multi-billion-dollar economic agreements reached with China, the United Kingdom and France and meetings with Russian President Vladimir Putin and Japanese Prime Minister Shinzō Abe as evidence of Kazakhstan’s continued integration in the global economic ties and its expanding cooperation with key players.

“I urge all political parties, public associations and all citizens to be imbued with a common concern for the welfare of our homeland and to take an active part in the implementation of the address. We will overcome a new global crisis. We have a single will and strong traditions of unity of the people. We will drive our Kazakhstan to a new level of development,” said Nazarbayev.