By Talgat Issenov in Nation on 21 December 2015

ASTANA – In Aktau, Commander-in-Chief of Kazakhstan’s Naval Forces and Armed Forces, Rear Admiral Zhandarbek Zhanzakov summed up the activities of these troops for the current year, according to the press service of the Kazakh Ministry of Defence. 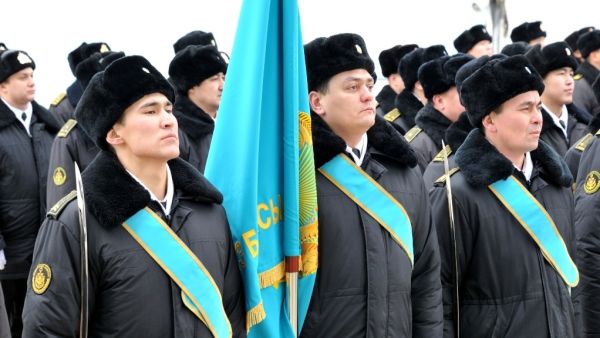 By the decision of the commander-in-chief, 2015 was declared the year of petty officers and 2016 will be dedicated to improving the physical training of the military naval forces of Kazakhstan.

“I express confidence that in 2016, the personnel of the Naval Forces will achieve new indicators in combat, state and legal training and will not allow disorders of military discipline, law and order,” Zhanzakov said.

In addition, the commander-in-chief encouraged and awarded the best military sailors with valuable gifts, certificates and also expressed official thanks. According to zakon.kz, nominations were defined and carryover pennants handed out for achievements in operational, combat, mobilisation training and overall performance.

For example, the Saryarka missile and artillery ship and its commander Captain Lieutenant Zhumanov won in the Best Ship category, a battalion of material and technical support of Troop 29011 under the command of Major Dzhumanov became the best providing subdivision and the subdivision of Lieutenant Tagirbekov was recognised as the best coy.

In 2015, military personnel of the Naval Forces took part in 14 international events and competed in the marine biathlon The Caspian Sea 2015, which became one of the most significant events in which Kazakhs ranked second.

Kazakh military seamen demonstrated their skills in managing a ship, receiving and transmitting light signals according to the international system, shooting at air, sea and surface targets as well as rescuing a distressed ship and passengers overboard, zakon.kz reported.

Having successfully completed their first experience of international competition, they reaffirmed their readiness.

The descent of the Alatau raid minesweeper to water was also noted at the ministry. The vessel is made of composite materials and is part of a new generation of ships.