By Aiman Turebekova in Nation on 16 December 2015 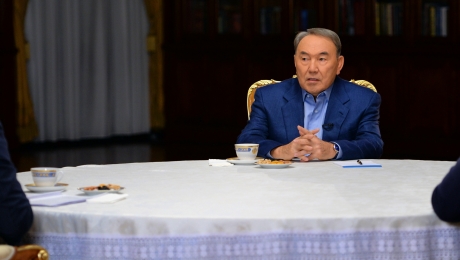 “During the years of independence, Kazakhstan has experienced several crises. We understood the situation and anticipated this negative trend, although we did not expect that everything would be so difficult. The price of oil fell during six months from $115 to $40. The reduction in exports, including metals, gas and others, has reduced the country’s revenue. Combining all this, we have figured out further steps. I informed about these steps through my recent state-of-the-nation address to the Kazakh people,” Nazarbayev said.

Despite the difficulties of today’s reality, including the further slump in tenge’s exchange rate, the President maintained that the overall situation within the country is stable. “We try to make every effort to protect people from the consequences of the crisis; for instance, by increasing salaries for employees in budgetary institutions beginning Jan.1 as well as raising basic pension and scholarships,” said Nazarbayev.

The President stressed that reciprocal sanctions between Russia and the West, the deterioration of Russian-Turkish relations and the decline in the economic dynamics of China have negatively impacted Kazakhstan’s economy.

Speaking about relations between Moscow and Ankara, Nazarbayev said “the situation does not bring benefit to anyone. If common sense prevails, the parties will reach a compromise. The best way to reduce tensions is negotiation and consensus. I think this is in the interests of both countries, as well as Kazakhstan.”

Nazarbayev also noted key events from 2015, such as the planned signing of an enhanced partnership and cooperation agreement with the European Union as well as Kazakhstan’s accession to the World Trade Organisation.

The President highlighted the country’s relationships with leading nations and international financial institutions and his 2015 visits to China, the U.K. and France as well as his discussions in Astana with leaders of foreign states and governments. “This notion provides confidence and points out that the country has respect among countries, which is the result of our actions in 24 years of independence,” said Nazarbayev.

He also expressed pride in the country’s new, modern capital as a symbol of the growing nation. “Over the years, we have created an entirely new country and a new generation. They are absolutely open young people, without any complexes,” he said.