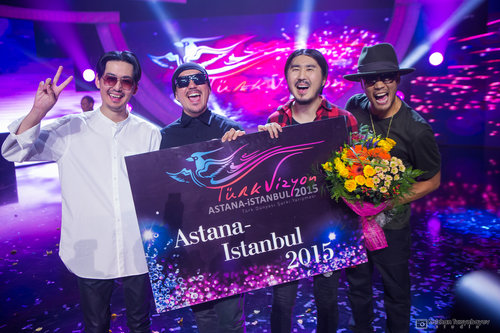 “In fact, Türkvizyon is one of the most prestigious competitions in the international arena, which gathers all the best artists from the Turkic countries. And for the second consecutive year, Kazakhstan proved that our culture, pop culture and pop music as a whole are at the proper level. Last year we took first place; this year, took second with dignity. Of course, the participant from Kyrgyzstan had a worthy victory and we are happy for our close brothers,” said Bolat Mazhagulov, head of the Astana Department of Culture and a member of the jury.

The event demonstrated the talents of those involved.

“Through the competition, we really want to show that the culture of the Turkic peoples is developing and it is the advanced part of the world culture. Our mission is to carry out this contest every year. This year, we also started Bala Türkvizyon (contest for children), which started in Kazakhstan,” said Türkvizyon general coordinator Islam Bagirov, according to 24KZ TV.

Orda, composed of members Dastan Orazbekov, Nurlan Alymbekov and Yerbolat and Yesbolat Bedelkhan, celebrated its 15th anniversary this year. They write their own songs and choreograph their dance routines. Soloists from the group played supporting roles in “Forbidden Dance,” a film directed by Yerbolat Bedelkhan released in 2013.

The band was chosen by a special expert committee to represent Kazakhstan at the international level. More than 80 applications were received at the first stage of the national selection, with 19 finalists chosen, according to Turkvyzion.kz. The final was broadcast live on national TV channel Nov. 6, where Orda was selected as the nation’s representative.

Türkvizyon Song Contest was inspired by the format of the Eurovision Song Contest. The first edition took place in Turkey in 2013. Countries and regions which are Turkic-speaking and of Turkic ethnicity are eligible to participate.