By By Kamila Zhumabayeva in Nation on 12 December 2015

ASTANA – Kazakhstan, in collaboration with the United Nations Development Programme (UNDP), submitted an application for $9 million to the Global Ecological Fund (GEF) for the purpose of forest ecosystem management, representatives announced at the Dec. 8-9 national scientific and practical seminar held by the UNDP in Kazakhstan and the nation’s Ministry of Agriculture. 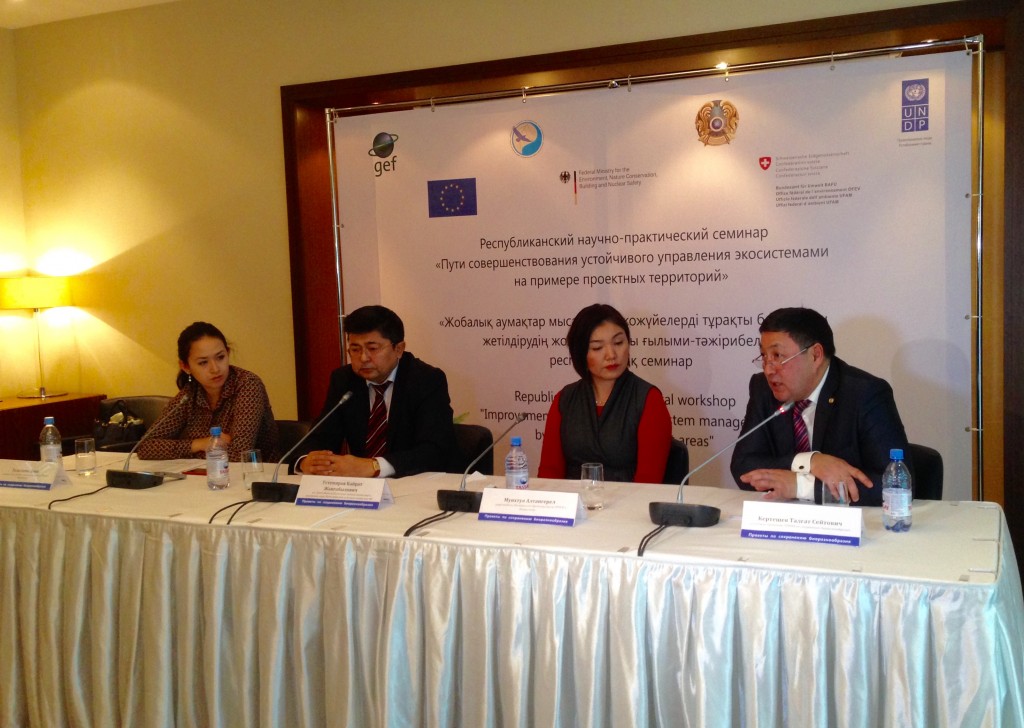 Speakers at the Dec. 8-9 national scientific and practical seminar held by the UNDP in Kazakhstan and the nation’s Ministry of Agriculture as part of UNDP biodiversity projects

At the press briefing, acting chairman of the Ministry’s Forestry and Wildlife Committee Kairat Ustemirov announced the collaborative activity of UNDP and the ministry in the field of biodiversity preservation and combating land degradation.

“As for the UNDP project, we are planning a project; an application for a new project related to forest ecosystem management was already submitted to the Global Ecological Fund. There is also one more component – saiga study,” he said. “The project is quite big and worth about $9 million. GEF will consider it now. There is preliminary approval; if everything goes well and GEF approves it, the project will begin next year.”

UNDP Biodiversity Projects Manager Talgat Kerteshev announced that $4 million of the $9 million it plans to commit will be for the study of saiga mortality and preservation of snow leopards in Kazakhstan.

The number of saiga is expected to increase once the results of the project are implemented, according to Ustemirov.

“In addition, we will strengthen measures to protect saiga. We hope to increase the population,” he added.

As part of its project, until 2020 the UNDP wants to determine forest absorbent capacity and the pasture ecosystem that belongs to ecosystem management services, said Kerteshev.

“This work was started, but international methods that would be adapted for Kazakhstan’s conditions are needed,” he added. “Overall today, according to statistical indicators, 17 percent of land ecosystems must be covered by specially-protected natural territories, but this index is equal to 2.3 percent in Kazakhstan.”

The speakers also specifically stressed the importance for the Kazakh government to accept and implement the concept that was developed for sustainable use conservation of biodiversity until 2030 in order for the nation to fulfil its obligations for the Climate Change Conference in Paris.

“If we want to systematically ensure the preservation of biodiversity and the ecosystem for our future generations, we must accept this concept that examines biodiversity conservation via specially-protected natural territories and stipulates the inclusion of policies of forests, fish, hunting and agricultural sectors into issues of sustainable use of biodiversity,” Kerteshev emphasised.

He added most countries entering the Convention on Biological Diversity have confirmed their strategy for 2020-2030, while in Kazakhstan the project went through primary agreement among state bodies and is no longer moving.

“We need this concept because being a country of the convention, Kazakhstan made a commitment on biodiversity conservation via specially-protected natural territories and to establish it, a strategy is needed,” said Kerteshev. 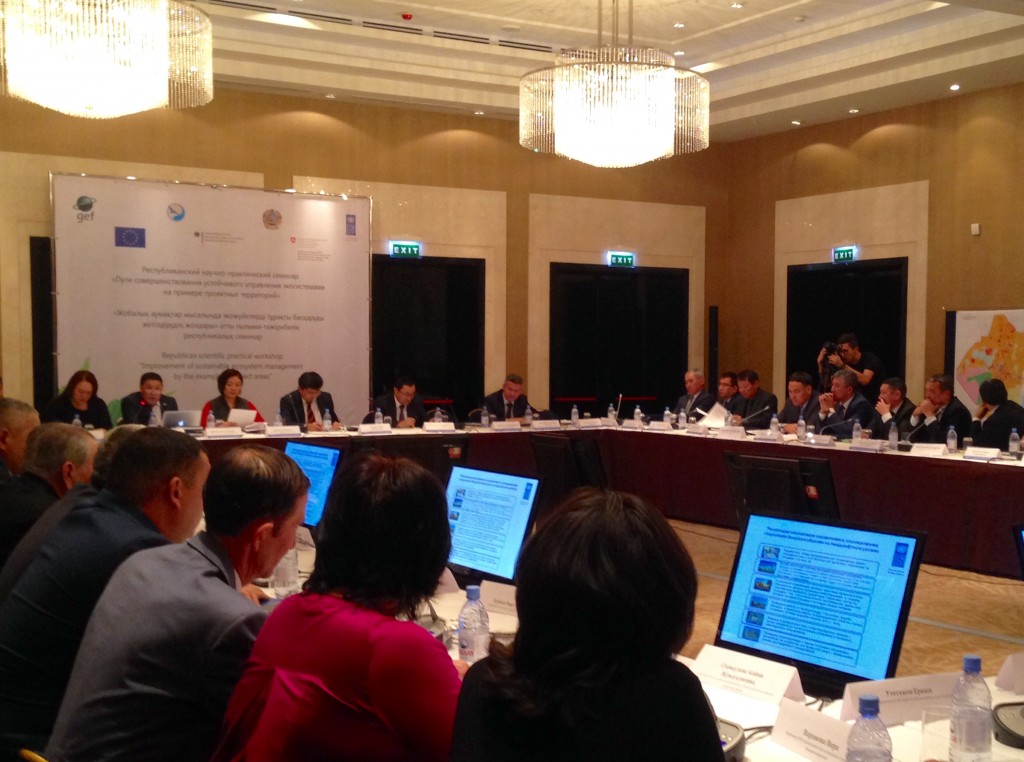 According to Novosti Kazakhstan news agency, project activities aimed at solving the existing problems with saiga migration and lack of programmes on species management will be outlined, proceeding from problems and threats to the animals.

“Today, Kazakhstan lacks separate targeted programmes on management of species: saigas, snow leopard, sturgeons and turanga. Those programmes are necessary. We must know the conditions in which saiga live, threats that emanate from them and migration paths,” said Kerteshev.

Ensuring preservation of migration routes for animals is an important issue. He noted a proposal was made that the transport network must be provided with migration routes, for example, in the form of tunnels.

”Hunting and agricultural work are prohibited during spring or autumn migration. There is no route for transition of large mammals anywhere. It is a big problem, because we create artificial obstacles that way,” he added.

Five projects for preservation of the desert and semi-desert ecosystem, sustainable wildlife management and implementation of financial mechanisms of biodiversity and ecosystem preservation are currently being realised within UNDP projects on biodiversity conservation, stated the UNDP press release.

Preservation of Kazakhstan’s highland diversity and steppe ecosystem are among other projects where the main emphasis will focus on creating new specially-protected territories, said Kerteshev.

“When, for example, a national park is being created, a five-year management plan is made promptly. Protection, scientific and ecological enlightenment and tourism activities unfold to foster the rural youth on biodiversity conservation. Additionally, local residents earn money through rendering services for ecotourism development,” he added.

Reserves established by the government, including Akzhaik, Ural, Altyn Dala in the steppe zone, Dzhungar Alatau National Park in Almaty region and Buiratau in Akmolinsk region were created within UNDP projects. More than 400 rural residents are currently working in the areas.