By Malika Orazgaliyeva in International on 4 December 2015

ASTANA – Prime Minister of the Netherlands Mark Rutte arrived in Astana Dec. 2 for an official visit which was intended to strengthen diplomatic and economic ties between the two countries and which included the signing of an official agreement on the Netherlands’ participation in EXPO 2017.

Nazarbayev and Rutte discussed the status of bilateral economic relations, issues in the oil and gas industry, agriculture, transport and space development and exchanged views on international issues.

Nazarbayev noted that the Netherlands is an important partner for Kazakhstan.

“This is our fourth meeting. My visit to your country last year was very fruitful and its results were important. … The Netherlands is one of the largest investors into the economy of Kazakhstan and one of our most important trade partners. We see your visit as an indication of your will to bring our bilateral relations to a new level,” he said.

In turn, Rutte noted the broad opportunities that exist for cooperation, in particular in light of Kazakhstan’s ongoing process of economic diversification.

He also highlighted the opening ceremony of Astana Square (“Astanaplein” in Dutch) in Rotterdam in November as clear evidence of strengthening and friendly relations between the two countries. 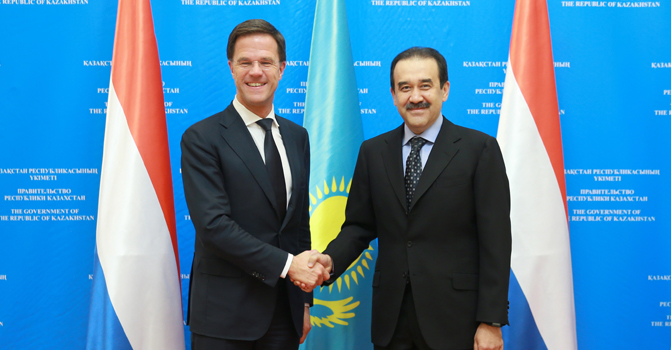 With Massimov, Rutte discussed trade, economy, cooperation in the oil and gas industry, agricultural innovations and interaction within the EU.

“The agricultural sector is well developed in the Netherlands. Even though your country is 65 times smaller than Kazakhstan, it is the second largest agricultural producer in the EU. This offers a great opportunity to increase Kazakhstan’s potential productivity. Your visit will be very important and useful for future development,” Massimov said.

Rutte noted that Kazakhstan is the first country in Central Asia to sign an Enhanced Partnership and Cooperation Agreement with the EU (to be effected at the end of December in Astana).

“I believe that this agreement will set a completely new qualitative basis for political and economic ties between our countries,” he said.