By Michelle Witte in International on 10 December 2015

ASTANA – Discussions at the final roundtable of the inaugural Central Asia Security Innovation Conference at the Library of the First President in Astana Dec. 9 highlighted the importance of preparedness, communication and cooperation in dealing with security and other issues, with speakers placing particular emphasis on the need for more conversation between Central Asian states. 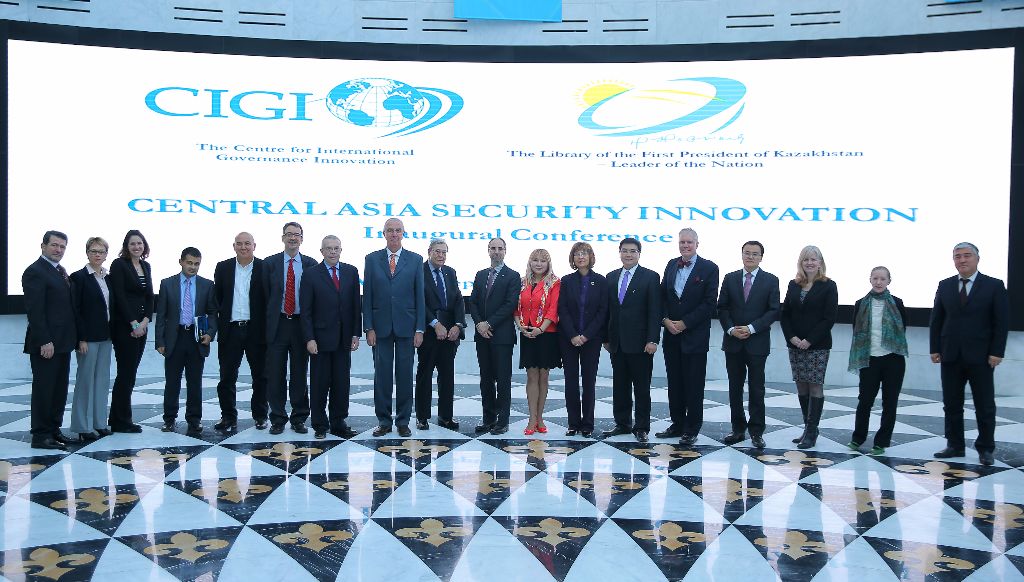 “The ability that we have to link arms, on technical levels, on security levels, on health levels, on information-sharing, is what will get us through moments that could otherwise be disastrous,” said former Minister of International Trade and former Minister of Public Safety of Canada Stockwell Day, stressing the way cooperation and preparation can mitigate the effects of disasters in his opening remarks at the roundtable.

The two-day conference, organised by the Canadian Centre for International Governance Innovation (CIGI) in cooperation with the governments of the five Central Asian states, was intended to provide an opportunity for exchanges on security governance challenges, focusing on what had been identified as the five major challenges: anti-terrorism, border management, human and drug trafficking, energy and nuclear security, and transboundary water management.

Discussion moderator, former Ambassador of Canada to Kazakhstan, the Kyrgyz Republic and Tajikistan and CIGI senior fellow Margaret Skok, explained, “We needed yesterday and today to listen to what Central Asian government officials viewed their priorities in security governance to be. We also wanted to be able to explain some of our security approaches to see if there was a match. And once we understand well what the priorities are, we would like to invite representatives of the five Central Asian governments to Ottawa next summer to actually begin sharing our governance models – so that’s policy and legislation. This is not a project planning initiative; this is one where we actually knowledge-share.” Such knowledge sharing on these challenges is urgently needed, she said.

Day, in his remarks, provided a sketch of the lessons Canada had learned from disasters within its borders and among its neighbours. “Sudden, unexpected events test the infrastructure and the social fabric of any group of people, of any country, of any nation and of any region. And the more prepared we are for those events, the better we will get through them and the more we can learn for similar events that might take place in the future,” he said.

The 9/11 attacks in the U.S. had driven home some key lessons, in particular, the importance of preparation in conducting communication after a disaster. “There were tremendous lessons to learn to be prepared ahead of time politically to speak, to give messages to a public that is wanting to hear something. To be supportive to neighbours and also to be able to speak to our own security forces.”

Deputy Director for Analysis, Planning and Foreign Policy Coordination of Ministry of Foreign Affairs of the Kyrgyz Republic Taalaibek Adzhikulov outlined the priorities of his state in his comments, including preventing drug trafficking, working more cooperatively and transparently on the use of water resources, ensuring the safe storage of nuclear materials and, of course, preventing Central Asian citizens from joining international terrorist groups and from returning home to sow discord. He also lamented the Central Asian brain drain.

From Uzbekistan, head of the Scientific Educational Centre of Corporate Governance of Uzbekistan Oybek Makhmudov also called for more cooperation within Central Asia and between the Central Asian region as a whole and multilateral organisations to fight terrorism. It is high time to pay serious attention to international terrorism in Afghanistan, he said. Central Asia has the potential, culturally and geographically, to be a “shield” against terrorism, if the countries and the world can cooperate. He also called for more brainstorming events and conferences among the Central Asian states and foreign partners.

Former Ambassador of the United States to Kazakhstan (2009–2011) and Tajikistan (2003–2006) Richard Hoagland shared a vision of the kind of cooperation that could drive Central Asian prosperity. Central Asian states may bemoan their “bad neighbourhood,” but Central Asia “does not have to be the passive victim of its neighbours.”

It can become a strong, prosperous region, he said, “but it would need to begin to move beyond the isolationist, go-it-alone mindset of the past quarter-century. It would need to set aside differences and competitions among its member states and become a region to be reckoned with in its own right, not in relation to another large country. By forming a unified bloc – we might call it the Association of Central Asian States – you would find greater strength and security in unity and would enhance the prosperity of all of its citizens. But if Central Asia continues on the same path it has followed for the past quarter-century since independence, it will continue to be subject to the whims and turmoil of its neighbours.”

However, Hoagland said, despite occasional meetings in bilateral and multilateral formats, “there really has been a notable absence of region-wide cooperation.” By setting aside personal rivalries for the greater good, a Central Asian bloc could help fully modernise and harmonise customs regulations and strengthen border security and over time, support regional trust and partnerships with countries on the outside.

One major internal requirement for such a bloc to work, however, is to end “endemic and sometimes government-sanctioned” corruption. That’s a tall order, he said, but it can be done given political will at the top of each member states.

Central Asia – currently isolated and disconnected – could significantly benefit from participating more fully in the global economy, but the fundamental shifts and reforms needed cannot be imposed from the outside, he said. Central Asian states themselves need to understand that it is in their interest to do so.

Also participating in the event were Deputy Head of the Chancellery of the President of the Kazakhstan Bakhytzhan Temirbolat and former Canadian Deputy Minister of Foreign Affairs and former Director of the Canadian Security Intelligence Service Reid Morden.