By Michelle Witte in Nation on 7 December 2015

ASTANA – The Astana Times passed its five year anniversary Nov. 30, celebrating its transition from a one-time digest to a monthly printed paper and now to its current incarnation as a biweekly print edition and one of the most-visited English-language websites about Kazakhstan. 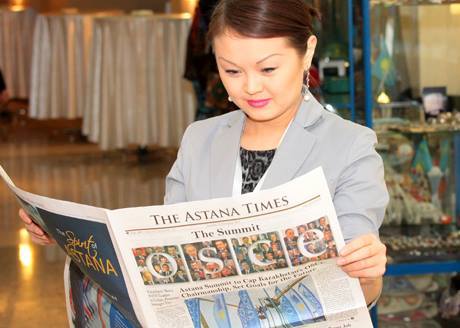 The idea of the paper was born in the weeks leading up to the landmark Organisation for Security and Cooperation in Europe (OSCE) summit in Astana in December 2010, Editor in Chief Roman Vassilenko recalled.

“Questions were asked then at the highest levels as to what Kazakhstan would present to the visiting heads of state and government of the 56 OSCE participating states and the 5,000 members of the delegations, and how to present it,” he said.

The idea of an English-language newspaper arose from these discussions. The two largest Russian and Kazakh-language newspapers, Kazakhstanskaya Pravda and Egemen Kazakhstan, came together to produce the first issue with Vassilenko, chairman of the Committee for International Information of Kazakhstan’s Ministry of Foreign Affairs, being asked to serve as editor in chief.

With the success of the OSCE issue, it was decided to create a regular English digest of Kazakhstan-related news. The Astana Times came out monthly through 2011–2012 and launched its twice a month schedule in January 2013. The paper has now claimed a clear position in Kazakhstan’s media market.

“The mission of our paper is to serve as the source of original and high-quality reporting and analysis on events in and around Kazakhstan for the ever-growing number of people interested in our country –  from business people to government officials to experts around the world,” Vassilenko said on the subject of the paper’s anniversary. “Today, The Astana Times is the only regular English-language newspaper in Kazakhstan and on Kazakhstan. Its growing readership and the quality of guest commentary it attracts, from presidents to foreign ministers to insightful scholars, attests to the fact that the paper has found its niche. We are deeply thankful to our readers whose interest continues to serve as inspiration for us to go on and on and on.”

Within Kazakhstan, much of paper and website’s readership are English-speaking expatriates, including diplomats. “From my point of view, The Astana Times serves a pivotal role within the Kazakh media sphere. This is due to the fact that many expats and investors from abroad who arrive in Kazakhstan don’t speak Kazakh or Russian, and The Astana Times provides one of the few platforms enabling them to be updated on the latest events in Kazakhstan in English,” Deputy Chief of Mission at the Embassy of Israel in Kazakhstan Emil Ben Naftaly said in an interview for this story. “Furthermore, the topics discussed in the newspaper are always relevant and I feel that they accurately portray the situation in the country. Nowadays, you can find in almost every country a news outlet in English, and it’s important for Kazakhstan to have one that reflects accurately the government’s position on various topics and the political and economic situation.”

Meiramgul Beisenova, programme communication specialist with the UNDP in Kazakhstan, says the paper “serves as an indispensable guide on the socio-economic and cultural life of the country for  English-speaking readers.”

Svitlana Pyrkalo, principal media adviser for the European Bank for Reconstruction and Development (EBRD), a frequent contributor to The Astana Times, said, “The Astana Times is the first source for any business visitor for news and trends in Kazakhstan. We at the EBRD are always thrilled to see news about our investments in Astana Times; we know that way it will certainly be seen by decision makers. The EBRD President has written for Astana Times on a couple of occasions, and we were proud to see the paper with his op-ed being read by investors at the Foreign Investors Council where he is co-chairman with the President of Kazakhstan.” Kazakhstan Country Director for the EBRD Janet Heckman commented that “With the emphasis in Kazakhstan on foreign investment, The Astana Times plays an important role in informing the international community in Kazakhstan and visiting business people about the latest developments in Kazakhstan.”

The paper also reaches Astana’s nongovernmental community. “From the point of view of a teacher working at an international school in Astana, I am very appreciative of The Astana Times,” Ray Benton-Evans, a teacher at Miras International School in Astana, told the paper for this article. “My overall focus is to promote student interest in current events. I do encourage students to use online news sources from their own country, but it is important that we study both events that are happening here in Kazakhstan, as well as the Kazakh response to international events. Editions of The Astana Times provide an English-medium source that cover an impressive range of topics.”

In a media environment with limited options in English, the paper is even sometimes called into use as a teaching tool. Joanne Ellison, also a teacher at Miras, has used its stories in her classroom. “I used excerpts from the paper to show students how news articles were written: the necessity for catchy headlines, quick information and precise language,” she told the paper for this story. “Using The Astana Times caught their interest, because the students were generally interested in current events in their own city; for that reason, the paper was a great help in teaching about different kinds of language.”