Airport for Tourists Flying to Alakol Lake to Be Built in Usharal, Says Official

By Kamila Zhumabayeva in Tourism on 12 December 2015

ASTANA – The Kazakh government plans to build an airport in the town of Usharal in the Alakol District of the Almaty Region in south-eastern Kazakhstan to accommodate tourists flying to the shores of Alakol Lake, Akim (Governor) of the Almaty region Amandyk Batalov said recently. 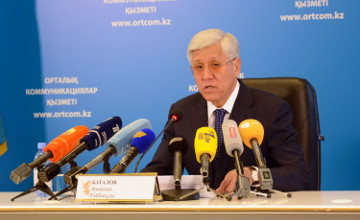 “According to instructions from the head of state, we are planning to build an airport in the Usharal town to bring our tourists and campers from there to the shore of Alakol Lake. Three hectares of land have already been allocated for it,” Batalov said at a briefing in the Central Communications Service under the President of Kazakhstan.

He added that the launching of an Almaty – Usharal air service is being planned as well.

The airport will be built over the next few years to increase the tourist flow, Vlast Internet magazine wrote.

In the meantime, the akim said the number of campers vacationing on the shores of Balkhash and Alakol lakes has increased to 138,000 people this year, according to the website.

The magazine said the increased number of vacationers is the result of improved logistics.

“The Almaty region is a tourism area. We began to work actively on the shores of Balkhash and Alakol lakes in the field of tourism. We have helped big investors in Alakol Lake by providing land and all the necessary infrastructure,” Batalov said.

According to the akim, two five-star hotels will open soon. One is nearly completed and the other is under construction, other news agencies reported. Ninety-four kilometres of power lines have also been connected to the recreational areas around Balkhash and Alakol lakes, roads are being repaired and an Almaty – Dostyk rail service is being established, the post said.

“Given the fact that a new road from Taldykorgan to Ust-Kamenogorsk will be built, we also want to build an offshoot at 141 kilometres to the coast of the Balkhash Lake. As of today, design and estimate documentation is being developed,” Batalov said, according to the Kazinform information agency. “Railway communication has been established. We started out with five carriages and today 11 are circulating. This rail route was in great demand among Almaty residents in summer.”