Media Executive Says Freedom, Diversity of Talents Key for Society to be Creative

How do governments encourage creativity to promote innovation-oriented policies? How do businesses advance in technology-driven economies? These questions are frequently asked by Kazakhstan’s private and public sector professionals in the aftermath of the major plunge in oil prices and amid rising economic challenges. 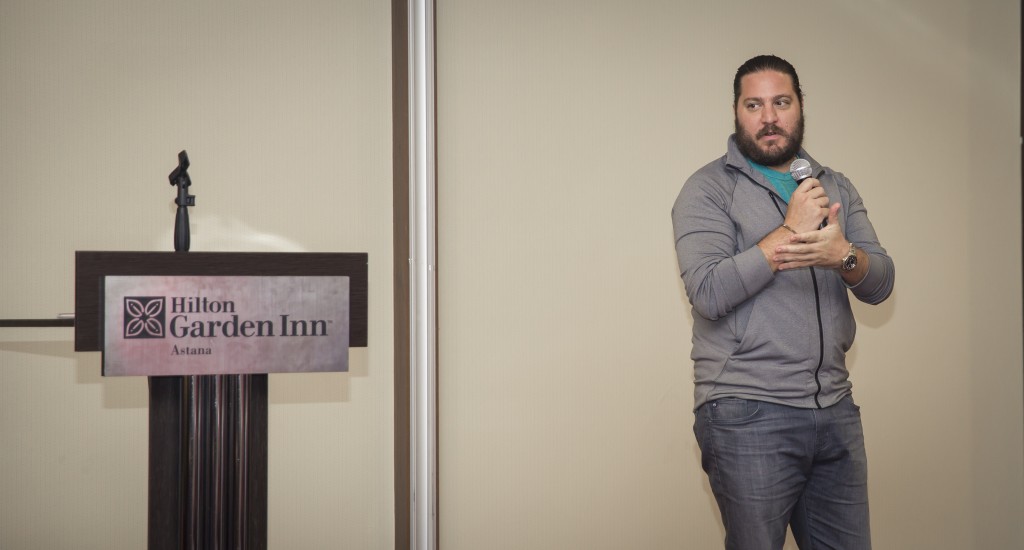 Traditionally, media and entertainment is an industry that stands at the forefront of technological and creative innovation. Media companies need to do more, however, than simply react to today’s challenges. Change is happening quickly and across more dimensions, says Peter Corbett, founder and CEO of iStrategyLabs.

In the span of only a few years, Corbett has built a media agency that has had a large number of massive and highly-successful campaigns. Whether it is an Internet-controlled arcade game for  Nickelodeon’s SpongeBob, live streaming interactive games for MillerCoors, Facebook’s Mentions App connecting celebrities with their fans or a cool selfie-mirror, iStrategyLabs creative team has been able to combine inventiveness and technical expertise to devise products that push the boundaries of what’s possible.

iStrategyLabs was named Ad Age’s 2014 Small Agency of the Year, while Corbett has been named one of 100 Tech Titans by Washingtonian Magazine and one of the most influential Washingtonians under 40 by WashingtonLife.

Corbett gave a master class in October to Kazakh journalists and media experts in Astana on producing creative media content and developing products that offer both offline and online experiences for potential viewers and clients. Afterward, he sat down with The Astana Times to share his success story and insight into global media trends.

What do you think makes iStrategyLabs stand out among other digital ad agencies?
I think it’s the focus on this intersection of online and offline. We build Internet-connected devices and mobile and web applications. But most digital agencies can build web and mobile applications and they can do social media marketing, but they have no idea how to do something in the real world. Then there are agencies called experiential agencies, or production companies; they know how to do things. They can build a stage, they can build a set, they can make a device, but they are not that good with technology. So I thought if I did both of these things which I was very passionate about we would probably have this ‘killer’ combination and that’s been our case and our differentiator.

During your seminar, you talked about creating campaigns that offer a real-time experience. Why is that so important?
We live in real time. So if you really want to get someone’s attention, do something for them that they have to pay attention to right now or they’re going to miss it. A lot of our most successful campaigns have been “real-time,” things we’ve done for NBC Universal, MillerCoors, Nickelodeon and a few others. What we’ve seen is that if we combine that real-time interaction with some form of incentive, we generally have the opportunity to reach millions of people.

You said you have a creative team. How do you keep them creative and motivated?
We try to find people that are self-motivated. They want to do something. They are passionate about inventing, making a prototype for a device, designing the interface for a mobile application, producing 15-second videos through animation for Instagram. So it’s not a matter of ensuring that they are motivated, they already are; it’s the matter of making sure we have the right projects for them to work on. If the project is there, then they just attack it. So part of my job is to make sure we have the right projects.

How do you create work opportunities and make sure you have the right projects?
We are really good at marketing, that’s why clients hire us, and so we are very good at marketing ourselves. Some of the things we do to market ourselves is we invent prototypes that would be exciting and then we put them on the Internet as a video and usually a lot of attention is given to them.

We built a prototype for something called a selfie mirror, which is a mirror that when you smile, it does a facial recognition and takes a picture automatically and posts it to your Twitter, Facebook and Instagram accounts. We filmed a 45-second video and in about three days 200,000 people watched it and about 5,000 people emailed saying they wanted to buy one. Now you might ask yourself how you get 200,000 people to watch this video. We know how marketing works. We know how social media works. We inherently understand the language of the Internet. We’ve actually done big splashy campaigns for ourselves half a dozen times. We usually get coverage in the world’s biggest publications, including The New York Times, USA Today, The Washington Post and NPR (National Public Radio). Then our potential clients call us to say “You guys seem to be incredibly creative and inventive. Can we do a project together?”

Is this your first time in Kazakhstan? What are your general impressions?
I have been to 60 countries now. I came from Turkmenistan; I had a culture shock coming to Kazakhstan because it was so normal. Coming to Kazakhstan felt great and I felt a sense of relief. “Oh, this is recognisable, this feels European. I understand it’s got its touch of Asia.” I think that the people here are really sharp. The people I’ve talked to have a good grasp of the emerging technology and seem to be entrepreneurial. There seems to be lots of promise. Obviously, now the challenge is the devaluation of the tenge and the oil-driven economy.

What does it take for a society to be creative?
I think the first thing is it has to have freedom. I know it sounds cliché saying that as an American. But without freedom, creative activity is not going to flourish. Then what you add is the diversity of perspectives, a diversity of talents. It turned out that America had the freedom piece, but it wasn’t the most diverse country in the world in the 1700s-1800s. It was mostly European. So what happened with World War II was probably the best thing that could ever happen for America. We took the best engineering minds of all time over to America in the forties and fifties. That set an incredible base for renaissance of technological development that blasts even today. The next thing you probably need is a big-enough market. You need access to capital and infrastructure. As it turned out, America had all of these things. There are very few places that had all of the things. The places that had most of the things often did not have big markets. The Dutch are incredibly creative. If you go to Amsterdam, they have really great designers and great programmers, but not the biggest businesses in the world because they are a small country. Across Europe, the Europeans are still sort of the Germans only thinking about Germany, the Dutch only thinking about the Dutch, Finns thinking about Finland. So they’re not always thinking about the global context. Americans, especially American entrepreneurs, have this natural inclination to think “I want the whole world to use my stuff, not I want all of New Jersey to use it, or all of America.” They think “I built Facebook; I want the whole world to use it. I built Google; I want the whole world’s information to be connected.” So there’s this mentality of “globalness,” rather than a mentality of “nationalness,” that is very American.