Kazakh President Urges Russia and Turkey to Move Toward Reconciliation

By Michelle Witte in International on 30 November 2015

ASTANA – President of Kazakhstan Nursultan Nazarbayev took a few moments in his state of the nation speech Nov. 30 to address the tensions between Russia and Turkey following Turkey’s downing of a Russian plane near the Syrian-Turkish border. Nazarbayev called for restraint on both sides, but also clearly stated Kazakhstan’s position that the plane had been there to attack terrorists, not Turkey. 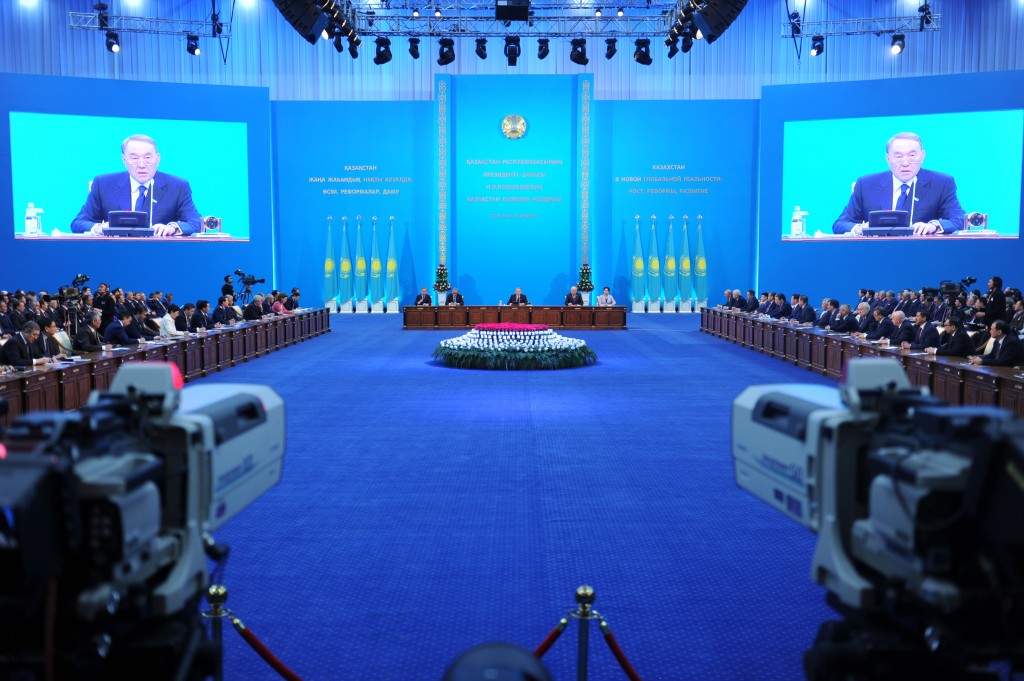 President of Kazakhstan Nursultan Nazarbayev gives his State of the Nation address Nov. 30.

“We are greatly saddened by the events that occurred between Russia and Turkey,” he said toward the end of his yearly address to the nation which lasted more than an hour and a half and which was marked by many off-the-cuff comments. “As of now, all the details are not known. But the fact is that the Russian bomber was not attacking Turkey. It did not go to Turkey. It was at war with terrorists.”

Nazarbayev urged both sides to remain calm while the Nov. 24 incident is investigated, and, after any wrongdoers are punished, to resume building relations. He also noted that he had spoken by phone about this with Turkish President Recep Tayyip Erdogan.

During the phone call with the Kazakh President, initiated by Turkey, Erdogan expressed his willingness to meet Russian President Vladimir Putin, the Akorda reported Nov. 29. During the call, Nazarbayev expressed regret at the incident and once again voiced concern at deteriorating relations between the two powers. “The parties need to take responsibility for saving the relationship,” he said, according to the Akorda.

Kazakhstan always advocates a peaceful solution to problems, Nazarbayev pointed out in his address. “I am someone who has worked for many years in order to bring Russia and Turkey closer together, to make their relationship friendly. Since the time of Prime Minister [of Turkey Süleyman] Demirel, starting with President [of Russia Boris] Yeltsin. And all of this that was built over many years could now come to nothing,” he said. “However difficult it is, there needs to be a way to work together to create a commission to identify those responsible, to punish them, to admit any mistakes and to restore the relationship. This is what I am urging our friends in both Russia and Turkey to do.”

Russia has cancelled its visa-free regime with Turkey since the incident as of Jan. 1, 2016, and on Nov. 28 announced economic sanctions against the country.

Nazarbayev’s comments were more forceful than the Nov. 25 statement by Kazakhstan’s Ministry of Foreign Affairs on the incident, in which a Russian combat jet was downed by the Turkish military for what Turkey called repeated violations of their airspace. One of the two pilots was killed by members of a Syrian rebel group after ejecting from the plane.

“The tragic incident with the downed Russian SU-24M on Nov. 24 is regrettable,” the Ministry of Foreign Affairs said, expressing condolences in connection with the death of the Russian serviceman. “We are deeply concerned with the worsening of the Russian-Turkish relations. … What happened can have an impact on the effectiveness of the anti-terrorist campaign. We call upon the Russian and the Turkish sides to show restraint in reacting to this tragic incident and to use all possible measures and channels to de-escalate the situation.”