By Kamila Zhumabayeva in Business on 28 November 2015

ASTANA – The European Bank for Reconstruction and Development (EBRD) officially launched its Women in Business programme in Kazakhstan at the Eurasian Women’s Summit (EWS) held Nov. 25 in the capital’s Palace of Independence. 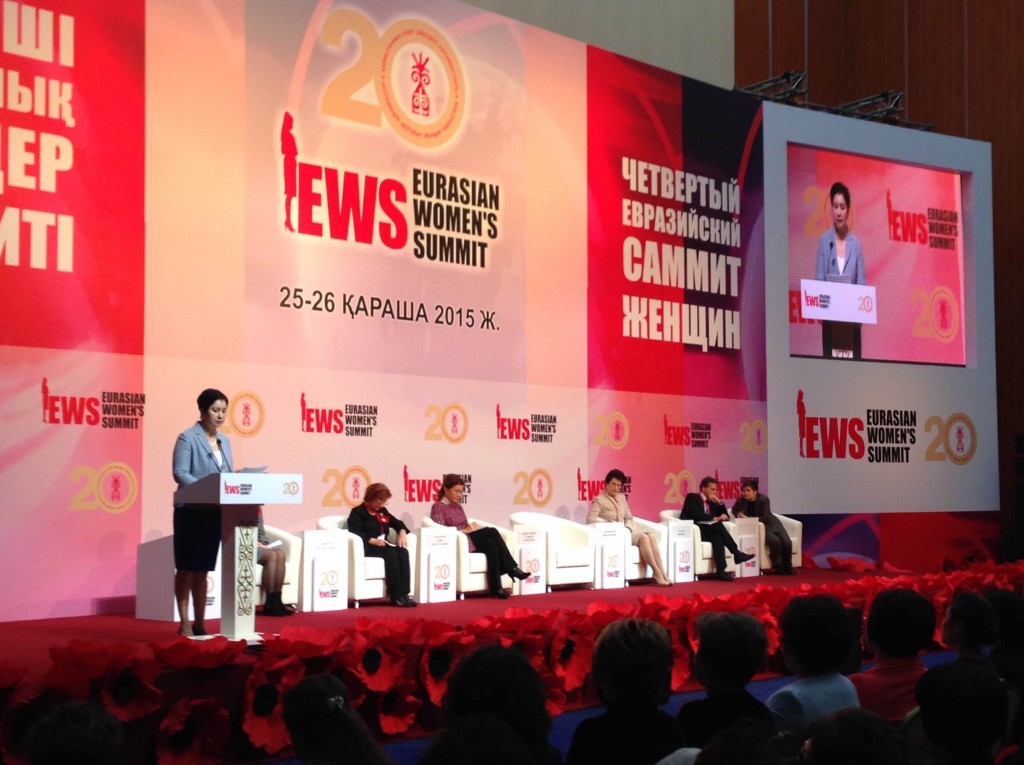 Secretary of State of Kazakhstan Gulshara Abdykalikova addresses delegates and guests of the Eurasian Women’s Summit in Astana.

Co-funded by the EBRD and the government of Kazakhstan, the programme is the first of its kind in Central Asia, a Nov. 25 EBRD press release stated. According to the EBRD, the programme offers credit lines, risk management support and technical assistance to local partner banks who work with women-led SMEs and provides business advisory services, training and mentoring to women-led SMEs directly.

“It’s a $50 million programme of which $8.2 million is contributed by the government of Kazakhstan and we expect to reach 2,000–2,500 women entrepreneurs and business people throughout Kazakhstan,” Director of the EBRD in Kazakhstan Janet Heckman commented on the programme. “I visited quite a number of women-led enterprises recently … Really it’s quite exciting to see women in all areas in business from construction to concrete manufacturers to dairy.”

The EWS gathered around 500 women delegates from social, political and business circles in the region. The event was opened by Secretary of State Gulshara Abdykalikova.

Nazarbayeva called on Kazakhstan’s women entrepreneurs to participate in privatisation and to collaborate with the government, particularly in the social sphere.

The summit gave an opportunity for Kazakhstan’s women entrepreneurs to communicate, share experiences, find new connections and exhibit their products and brands. Many participants of the summit observed that the government is currently providing a great deal of assistance for them and that opportunities exist today that never have before, including being able to open a business with government’s support and obtain bank loans at minimum interest rate.

According to the Damu Fund, a Kazakh fund that supports small businesses, more than 2,400 projects of entrepreneur women were supported within the Business Road Map programme from 2010 to now. The figures were made public at the Nurly Zhol – New Opportunities conference held within the EWS. The Damu Fund has been implementing micro crediting of women’s entrepreneurship since 2010.

Founder and Director General of the Yutariya Group Saule Shaumenova, who participated in this year’s summit, said her company was one of the first to receive support through the Business Road Map programme. “Today I represent our young project, realised with the help of EWS. A few years ago this platform was not only a dialogue opportunity for me but also a place to present my dreams. Now, after three years, it is not a dream anymore but a reality,” she said.

Yutariya Ltd is an official dealer and representative of Zoje Sewing Machine Co., Ltd in Kazakhstan. The company produces clothing for military and does computer programming of special sewing machines. They have also been involved in the creation of the KazTexExpo industrial complex in Astana’s special economic zone. “We proudly say that we have implemented a third project in Russia with support from the Damu Fund and the government,” Shaumenova reported.

According to Shaumenova, the project helped create 450 new jobs in its branch in Astana, mainly for women but also for people with disabilities. A dual training system and retraining programme of personnel is also available.

“This summit is an opportunity to tell and show the possibilities of every businesswoman to be able to set her own business and create jobs today, during the period of forming of our state and make her contribution to an economic growth of our country. Our colleagues, entrepreneurs of small and medium business, we are ready to create new jobs in the field of light industry,” Shaumenova noted.

Being a woman in business isn’t necessarily harder or easier than being a man in business – just different, the entrepreneur mused, as women tend to work in service industries, the food sector or light industry. “Conditions and legislation programmes that work in our country today are accessible both for women and men,” Shaumenova said.

All entrepreneurs should intelligently apply all governmental tools and support available, she said. “All conditions are available you only need to work, apply international standards, plan and develop your business. I think it all depends on an individual, a head of a company, and the business goals she sets for herself.”

Business enterprises lead by female goods producers who received government support for the development of their businesses from the Damu Fund and participating in EBRD programmes presented their products at the opening of “Women in Business – 20 Brands of Kazakhstan” national exhibition held during EWS. These enterprises included businesses in the food and construction industry, medicine, agriculture and the road and coal sectors.