ASTANA – The second Media Forum of the Assembly of the People of Kazakhstan (APK) on Nov. 12 covered important issues regarding Kazakhstan’s inter-ethnic unity and the quality and competitiveness of the local mass media as well as the popularisation of the Kazakh model of public accord and national unity under the slogan Culture of Peace and Consent. 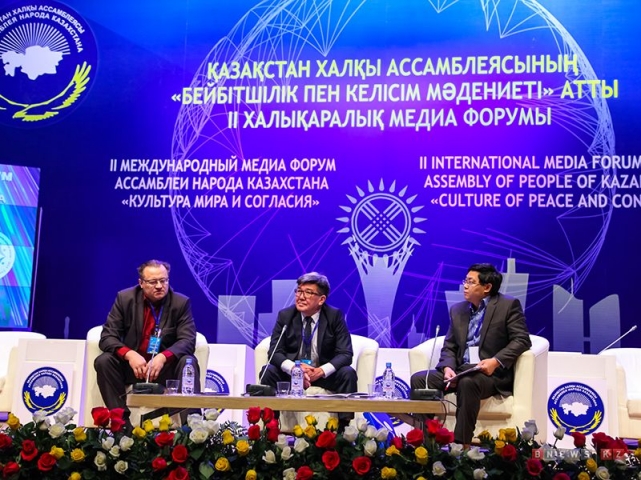 Speakers at the Media Forum of the Assembly of the People of Kazakhstan (APK) on Nov. 12. Photo: Bnews.kz

The event included an exhibition of various newspapers that are published in Kazakhstan, including the Korean paper Koryo Ilbo, which has been publishing for 93 years.

Three panel sessions were held discussing reporting and blogging and were led by leading journalists and bloggers.

“It is important that the journalists who release information to the masses understand responsibility for their words,” Deputy Dean of the Journalism Faculty of Lomonosov Moscow State University Petr Schultzman said. “When the inter-confessional and inter-ethnic issues are [reported] a simple mistake in a last name may cause scandals and banal human losses.”

The important role of sharing experiences was underlined by Deputy Chair of the APK Yeraly Tugzhanov.

“Today, the world faces certain problems regarding questions of social accord … therefore, [when] foreign journalists and countries turn to us for an exchange of experience, we accept [their requests],” Tugzhanov said. “Only in the past year and a half, representatives of 15 countries arrived in Kazakhstan including Italy, France and China. [People from] five countries arrived in the past two months [on such missions].”

“The main thing people should be guided by is the ‘doing no harm’ attitude, because speaking out is not shameful, but defending your position and proving its objectivity is the main principle,” Chief Editor of the Kultura Plus Azerbaijani television channel Tofiq Abbasov noted. “Therefore it is necessary, first, to observe the principle of progression, and secondly, to strictly follow precision, objectivity and, in the end, lead your audience not in the wrong direction but in the direction towards justice.”

An inter-ethnic journalism club was proposed to be established in Astana, among numerous other proposals, in order to improve the qualifications of mass media representatives covering inter-ethnic beats.

The event was highlighted by the closing ceremony of the Shanyrak (Top of the Yurt) ethno-journalism contest held throughout the year by the APK.