ALMATY – An historical re-enactment of the Orbulak Battle recently took place in the Taldykorgan hippodrome, said the press service of the Almaty city akimat (city administration). The performance dedicated to the 550th anniversary of the formation of the Kazakh Khanate involved more than 600 people, including well-known Kazakh stuntmen, and was divided into three acts. 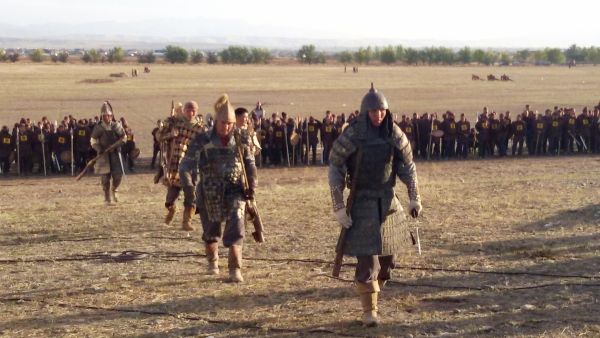 “The celebration programme also included a wide range of entertainment options for guests, such as sports games, an exhibition of military equipment and weapons, a food bazaar, a catwalk and a variety of installations, so that every participant of the event could find something interesting,” said a representative of the akimat.

Akim (Governor) of the Almaty region Amandyk Batalov attended the event and congratulated the participants and guests on the 550th anniversary of Kazakh statehood.

“We are here today to see the historical re-enactment of the battle, which has a special meaning in the history of the centuries-old struggle of Kazakh people for freedom and independence against the Dzhungars and their invasion. It was a serious test for Kazakh statehood and its military power. The battle we will watch today happened in 1643. This fight was an example of courage, heroism, fortitude and the unity of our people. We are indebted to our fearless ancestors who protected steppes and mountains of the Kazakh land. I am sure this day will remain in our memory. It is a very important thing to remember, to know and to appreciate our great past in order to build a prosperous present and future,” said Batalov.

Each of the three acts of the performance staged different historical episodes that took place in 1643. In the first scene, artists showed the attack of Dzhungar troops, then the action moved to the Kazakh and Dzhungar Khanates. The final scene was dedicated to the great battle that took place between the warring forces, which ended in victory for the Kazakh army. Zhangir Khan and Zhalantos batyr, who led the forces on the Kazakh side, became heroes after the fight.

According to the press statement of the akimat, the event held in Taldykorgan showcased the life, traditions and customs of Kazakh ancestors and the culture of the Kazakh nation. During the event, spectators could feel the atmosphere of the everyday life people led in the Kazakh Khanate. The historical performance was capped with a concert programme.