By Aiman Turebekova in International on 27 October 2015 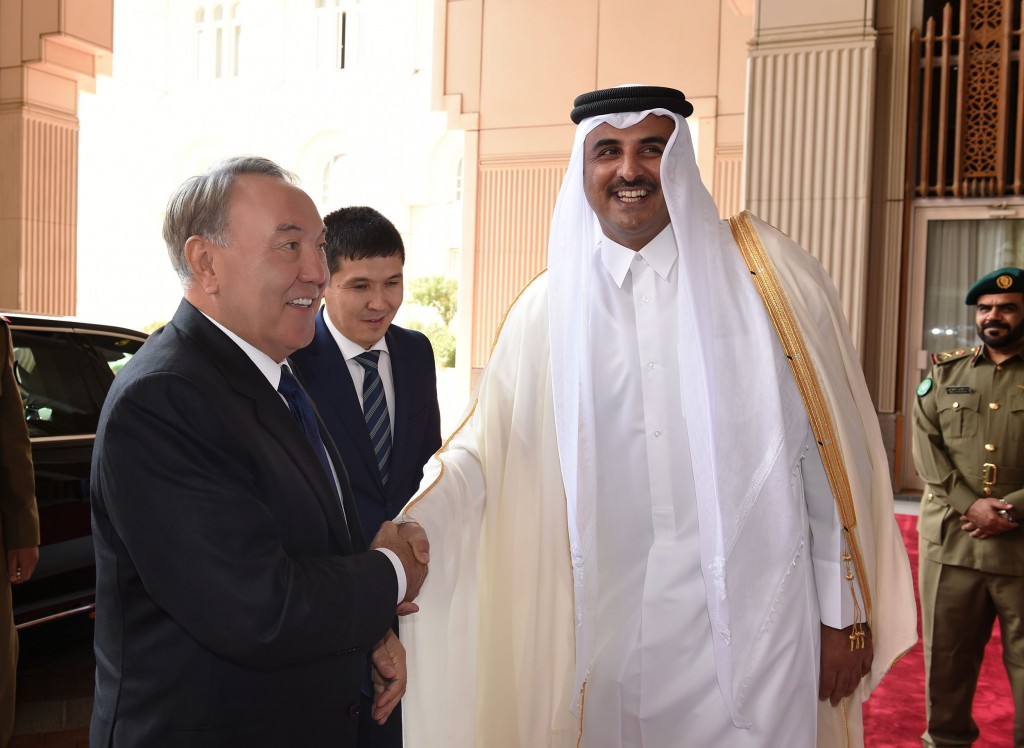 During the visit, an agreement easing visa restrictions for diplomatic passport holders and agreements on cultural, financial and energy cooperation were signed, as well as a number of business contracts between the two countries’ major companies.

“Although there is a vast distance between us, Kazakhstan and Qatar are facing similar challenges. Whether diversifying our economies, tackling extremism or developing technology to harness renewable energy, our countries have much to collaborate on. This visit represents the next chapter of stronger relations between Kazakhstan and Qatar,” commented Kazakh Foreign Minister Erlan Idrissov, who accompanied the President in Qatar, upon arrival.

During the official visit, Nazarbayev met with heads of leading corporations and financial institutes of Qatar in Doha. There, he noted that historic and cultural ties unite Kazakhstan and Qatar and praised the role which Qatar plays not only in the region but in the international arena in general.

The Kazakh President stressed that Qatar is developing dynamically, as evidenced by having one of the highest per capita gross domestic products in the world. He also said that Kazakhstan and Qatar are not reaching their full cooperative potential and that it is high time to move commercial and economic ties to a higher level.

“Today, the Central Asian region has huge potential and economic opportunities. We are ready to develop long-term and mutually profitable partnerships,” the Kazakh President pointed out during the visit.

Both Kazakhstan and Qatar possess great oil and gas reserves. Kazakhstan has launched economy diversification reforms to eliminate its dependence on oil and gas, Nazarbayev said. However, he said, Kazakhstan is also facing difficult economic times due to low oil prices. The country is in the process of implementing the second five-year stage of its major State Programme of Accelerated Industrial and Innovative Development (SPAIID), geared at kick-starting the industrial sector. In this regard, Kazakhstan and Qatar could exchange their successful experiences, he added at the talks in Doha.

According to Kazakh Economy Minister Yerbolat Dossayev, who also accompanied Nazarbayev, Doha is to channel about $100 million into the Kazakh-Qatari Investment Fund. Dossayev highlighted the great potential of bilateral trade and economic relations and the importance of investments in agriculture, the hotel and real estate sectors and the petrochemical industry. “Qatar is poised to potentially become one of the Middle East’s largest investors in Kazakhstan,” he said.

“Today, Qatar is viewed as an important player not only in its region, but also in the international arena. Its authority in the world grows year by year and we support it,” Nazarbayev commented.

Following the business meeting, Chairman of the Qatari Businessmen Association (QBA) Sheikh Faisal bin Qassim Al-Thani said the presence of the Kazakh President at the meeting confirmed the interest of the Kazakh leadership in enhancing joint cooperation between the two countries.

Later, Nazarbayev held talks with Qatar’s Emir Sheikh Tamim bin Hamad Al Thani. Nazarbayev noted the similarity of the two countries’ positions on regional and international issues. According to him, Kazakhstan and Qatar are working actively to diversify their economies, implementing a wide range of institutional reforms and working to develop infrastructure, industry and innovation. The Kazakh President stressed that these common programmes open up broad prospects for joint work.

He also discussed with the emir the development of Kazakhstan’s significant new transport and logistics potential, linking Europe with the countries of Southeast Asia and creating a new Silk Road reconnecting Eurasia.
Nazarbayev also mentioned the upcoming EXPO 2017, to be held in Astana, and urged Qatar to take an active part in the event, and discussed the planned Astana International Financial Centre, which is to be based on British law. Nazarbayev noted that Kazakhstan is interested in developing Islamic financing as well.

The emir expressed confidence that the visit would give a powerful impetus to bilateral relations and expressed interest in cooperation on a wide range of issues.

Following the talks, Sheikh Tamim bin Hamad Al Thani and Nursultan Nazarbayev witnessed the signing of a visa waiver agreement for holders of diplomatic and special passports between the governments of the two countries, a cultural and artistic cooperation agreement and a memorandum of understanding between Qatar Central Bank and the National Bank of Kazakhstan.

Qatar Solar Technologies (QSTec) also signed an agreement with Kazatomprom, the state-owned nuclear holding company, making Kazatomprom a strategic shareholder at QSTec. This will enable QSTec to produce raw materials in Kazakhstan and send them to Qatar to be converted into solar cells and solar panels.

In an opinion carried by Al Jazeera online on Oct. 26, Idrissov argued that the two countries, despite their differences, face many similar challenges, including the need to diversify economies and prepare for “life after fossil fuels.” They also both seek globally coordinated efforts in tackling violent extremism and terrorism. Calling the conflict in Syria “the greatest challenge to the resolve of the international community,” Idrissov called for renewed efforts to find a political settlement there as the only way to stop the violence. “Kazakhstan is ready to play its part, working closely with our international partners like Qatar,” he said.