ASTANA – After trailing 0:2 to the Dutch during their game on Astana Arena on Oct. 10, the Kazakhs managed to score in the last minute of added time to have a consolation goal. 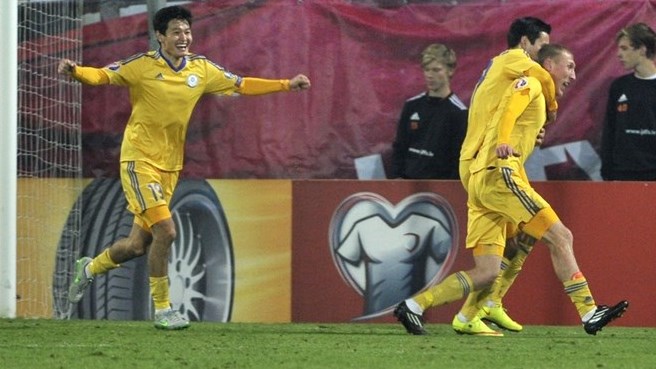 The game started in an aggressive manner right from the first minute as Yuri Logvinenko was shown a yellow card in the first minute for a bad foul. Four minutes later, the Dutch struck back with a foul of their own as Daley Blind took out Bauyrzhan Islamkhan from his feet, who 10 minutes later had to leave the field with an injury.

In the 33th minute, Georginio Wijnaldum scored the first goal of the game when he left-footed from outside the box and nailed it to the bottom right corner past 22 year-old Kazakh goal keeper Stas Pokatilov.

In the second half, Wesley Sneijder doubled the score in the 50th minute to give the Netherlands a comfortable 2:0 lead and a well-controlled match against the hosts, and everything was according to the plan the Dutch arrived with and in their minds they were rooting for Turkey who played against the Czech Republic at the same time in Prague.

In the last minute of the match, Islambek Kuat managed to score to make it 1:2 for his team, but it was too late. After 95 minutes of play, the Dutch dominated with 61 percent of ball possession and 15 attempts on goal.

For the Netherlands, the Oct. 10 game was important as the Dutch were on the verge of being ousted from the Euro 2016. With Iceland and the Czech Republic already in the tournament, the Dutch needed the Turks to lose to the Czechs and beat the Kazakhs to keep their hopes alive. And if the latter was checked on the agenda, the first task needed a miracle as that day Turks beat Czechs 2:0 in Prague. Yet the miracle didn’t happen as on Oct. 13 the Dutch yielded to the Czechs 2:3, while Turkey beat Iceland 1:0.

The last time the Oranje failed to qualify for a major tournament was the 2002 World Cup in South Korea and Japan.

In the next fixture on Oct. 13 the Kazakh national team faced off against Latvia in Riga. The Kazakhs fought for their first win in Group A and to their satisfaction clawed it out with a goal in the 64th minute, produced by Kuat again. With five points and a win against Latvia, Kazakhstan avoided the last place in Group A and finished the qualifying games.