By Aiman Turebekova in International on 29 October 2015

ASTANA – Kazakhstan and Japan have come out with a powerful joint statement calling on the world to make everything needed to ensure the entry into force of the Comprehensive Nuclear-Test-Ban Treaty (CTBT) and to move towards a world without nuclear weapons. 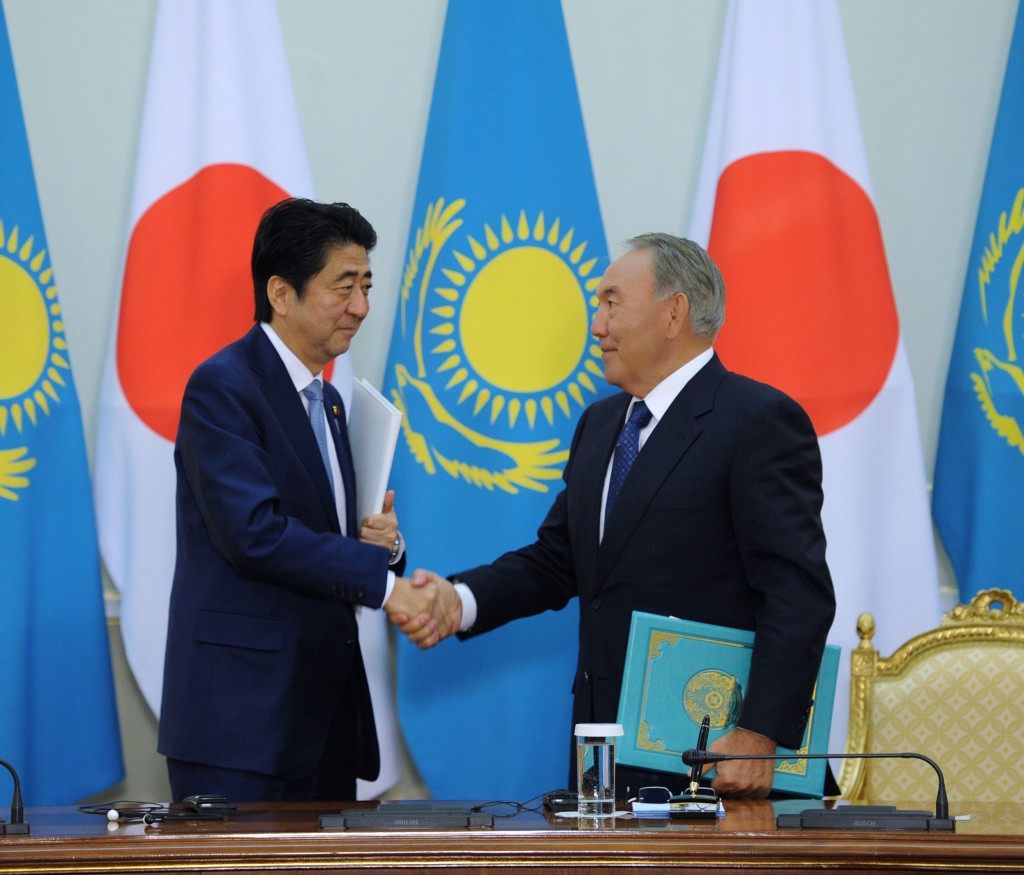 The statement, signed and issued by President Nursultan Nazarbayev and visiting Japanese Prime Minister Shinzo Abe on Oct. 27, recommitted the two countries, each with its own tragic page of history written by nuclear weapons, to working towards that goal.

CTBT, a treaty that would ban all nuclear tests for any reason, was open for signature in 1996, but still awaits signature or ratification by eight specific countries for it to enter into force.

In their statement, Nazarbayev and Abe expressed their commitment to the entry into force of the CTBT, saying their countries share a moral responsibility to prevent tragedies caused by nuclear weapons.

“As countries which experienced and are fully aware of the threat of nuclear weapons, Kazakhstan and Japan share the moral authority and responsibility to raise the awareness of the people throughout the world about the humanitarian catastrophes nuclear weapons have brought about. With this special mission in mind, Kazakhstan and

Japan are determined to work together closely, pursuing a world free of nuclear weapons,” the leaders said in the statement.

Japan suffered the 1945 U.S. atomic bombing of Hiroshima and Nagasaki, while Kazakhstan was the site of more than 450 Soviet nuclear weapons tests at the infamous Semipalatinsk nuclear test site in east Kazakhstan from 1949-1989. President Nazarbayev shut down the site in August 1991 against the position of the Soviet government in Moscow, and next year will mark the 25th anniversary of the closure of the Semipalatinsk site as well as the 10th anniversary of the signing of the Semipalatinsk Treaty on establishing a Nuclear-Weapon-Free Zone in Central Asia.

“These historic moments once again remind us of the need to extend the non‑use record of nuclear weapons until they are eliminated, as well as to strengthen the resolve to ensure that mankind never experiences the long-lasting, tragic effects of nuclear weapon use or nuclear weapon tests,” the statement reads.

The two leaders noted that the CTBT has achieved near universal adherence, having been signed by 183 states and ratified by 164. Kazakhstan and Japan, the countries that assumed co-chairmanship in the so-called Article XIV of the CTBT with a mission to advance the treaty’s entry into force, said they will work together to urge all states that have not done so to sign and ratify the treaty as early as possible.

“Yet we remain strongly concerned that the CTBT has not entered into force and urge the remaining eight Annex 2 states, whose ratification is necessary for the entry into force of the CTBT, to sign and ratify the CTBT without further delay,” the statement said.

The UN General Assembly adopted the CTBT on Sept. 10, 1996. As of 2015, eight states, whose ratification is legally required for CTBT to enter into force, have not ratified the treaty. China, Egypt, Iran, Israel and the United States have signed but not ratified the treaty; India, North Korea and Pakistan have not even signed it.

“Each state party undertakes not to carry out any nuclear weapon test explosion or any other nuclear explosion, and to prohibit and prevent any such nuclear explosion at any place under its jurisdiction or control,” Article 1 of the Treaty states.

The Kazakh-Japanese statement called on all states “to continue the moratorium on test explosions, the process of which began with the closure of the Semipalatinsk nuclear test site in 1991.”

“Kazakhstan and Japan share the view that, although not a substitute for legal obligations, with the continued moratoria on nuclear weapon test explosions, a nuclear test ban has become a de facto norm of the international community,” Nazarbayev and Abe said in their statement.

“We strongly deplore North Korea’s nuclear tests in 2006, 2009 and 2013 in clear violation of its international obligations and urge North Korea to refrain from conducting further nuclear tests. We also urge North Korea to fully comply with the relevant United Nations Security Council (UNSC) resolutions and the Sept. 19, 2005, Joint Statement of the Six-Party Talks and to take concrete steps towards denuclearisation,” the statement said.

“We appeal to all states to make the utmost effort to achieve the prompt entry into force of the CTBT. We dedicate ourselves individually and jointly to realising this honourable goal,” stated the two leaders.
On Sept. 29 in New York, Kazakhstan and Japan entered into two years of co-chairing the ninth Conference on Facilitating the Entry into Force of the CTBT.

“This document, along with the Treaty on the Nonproliferation of Nuclear Weapons, is the cornerstone of the entire global security system. Therefore, we are for the full universalisation of the treaty. Its entry into force will become an important step forward on the road to a world free of nuclear weapons. Kazakhstan intends to make substantial progress in this important work,” Kazakh Foreign Minister Erlan Idrissov emphasised in his Sept. 29 remarks at the ceremony at the UN.

He also highlighted Kazakhstan’s contribution to global nuclear disarmament and nonproliferation, including its most recent initiatives. The ATOM Project is among them since 2012, a campaign designed to support the early entry into force of the CTBT through signed petitions from all over the world. Today, more than 207,000 people from more than 100 countries have signed The ATOM Project’s online petition.

CTBT Preparatory Commission Executive Secretary Lassina Zerbo, in his own remarks following Idrissov’s, noted the contribution of The ATOM Project and especially its Honorary Ambassador Karipbek Kuyukov in galvanising global public opinion to the cause of banning nuclear testing permanently. 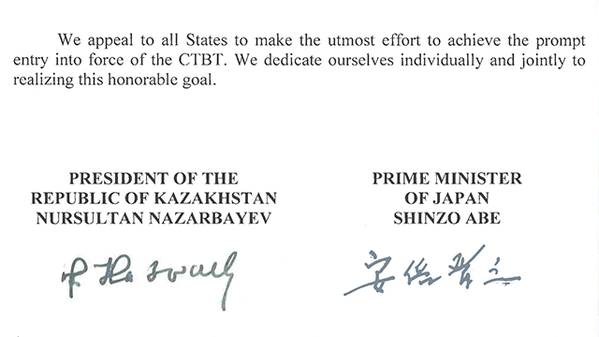