By Gleb Malykh in Business on 5 October 2015

A delegation of Kazakhstan’s national railway company, Kazakhstan Temir Zholy (KTZ), headed by company President Askar Mamin participated in the Second International Logistics Forum China – the Silk Road, held on Sept. 21-22 in the city of Lianyungang, China. The forum gathered more than 200 representatives of logistics and shipping companies from China, Japan, South Korea, Kazakhstan and Taiwan, as well as some European countries. 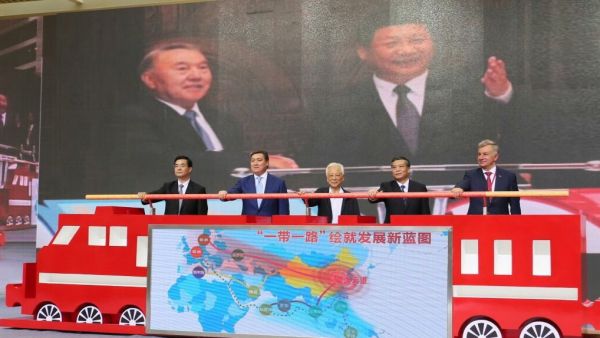 Speaking at the forum, Mamin presented a report on the development of the transit potential of Kazakhstan, introducing the country’s new Nurly Zhol economic policy, which correlates with the Chinese initiative “One Belt, One Road.” It was also noted that the number of China-Europe-China freightliners has increased three times, from 105 to 291, during the past eight months compared to the same period of 2014. At the same time, the speaker mentioned the high development dynamics of the Kazakhstan-China International Logistics Company of Lianyungang, which has managed 150,000 containers in 14 months. The figure is expected to reach 500,000 containers by 2020.

Several bilateral meetings were held during the Kazakh delegation’s trip, including with Governor of Jiangsu Province Li Xueyong and Mayor of Lianyungang Zhao Xiaojiang. The sides discussed the implementation of the agreement on the investment of $600 million in the development of the Khorgos-East Gate special economic zone (SEZ), signed on Aug. 31 during the visit of President of Kazakhstan Nursultan Nazarbayev to China. In addition, within the framework of the expansion of the Kazakhstan-China logistics company, a new project on building a logistics park for the member states of the Shanghai Cooperation Organisation on the territory of the dynamically developing sea port of Lianyungang has been reviewed.