By Michelle Witte in International on 5 October 2015

ASTANA – Kazakhstan’s chairmanship of the Almaty Process, a two-year-old effort to enhance cooperation on legal and illegal migration in Central Asia, is bearing fruit and the region can be an example for Europe in handling migrants and refugees, say experts. 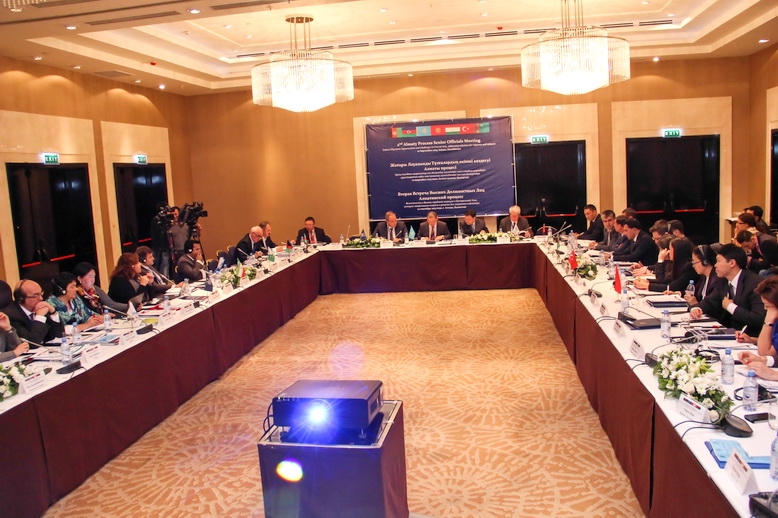 Participants at the Senior Officials Meeting of the Almaty Process in Astana on Sept. 22. Photo: IOM

Bernard Doyle, regional representative for Central Asia for the UN High Commissioner for Refugees (UNHCR), told participants at the Almaty Process Senior Officials Meeting in Astana on Sept. 22 that European countries can learn from the Almaty Process. “The Almaty Process is a young process, but I think it’s already setting some very good examples for other processes,” particularly in how to deal with huge numbers of migrants or refugees, which he noted Almaty Process countries have hosted for decades.

The Almaty Process can be a model for Europe in the way its member countries have provided solutions for their refugee populations, he said, and in the institutions the countries have built to deal with migrants and refugees, particularly in legislation. “That technical expertise that you have could be very helpful for the countries in Europe and the countries in the Middle East that are affected by this refugee process. So I think the importance of the Almaty Process is actually growing as we see this refugee crisis in other parts of the world.”

The Almaty Process on Refugee Protection and International Migration was initiated in 2011 by the government of Kazakhstan, the Internal Organisation for Migration (IOM) and the UNHCR. Its first regional conference resulted in the adoption of the Almaty Declaration, which acknowledges the need to address the challenges of complex regional migration dynamics and mixed migratory movements in Central Asia and beyond with cooperation and coordination. The seven member states are Afghanistan, Azerbaijan, Kazakhstan, the Kyrgyz Republic, Tajikistan, Turkey and Turkmenistan, with Iran and Pakistan as observer states.

The Senior Officials Meeting (SOM) focused on strengthening the capacity of participating states in handling labour migration in Central Asia, including through exploring labour opportunities, challenges and good practices, as well as analysing trends in labour and migration flows.

It included the presentation of a specially prepared report by the IOM, “Mapping on Irregular Migration in Central Asia 2014,” the first such document to be created at the behest of and within Central Asia, IOM Coordinator for Central Asia and Chief of Mission in Kazakhstan, Kyrgyzstan, Turkmenistan and Uzbekistan Dejan Keserovic said in an interview on Sept. 23.

In a region that is still struggling to build internal connections, migration seems to be an area in which states and organisations are working together fruitfully, the experts say.

Some of the major successes of the young process are the establishment of employment centres for Kyrgyz workers looking to emigrate to Kazakhstan, he explained. The centres set up by the IOM and the governments of the countries, help potential migrants try to find jobs first within their country, then abroad. “It’s a facilitated, regular migration, meaning that they sign the contract before they depart. And this protects the right of the migrants … and at the same time the receiving country, Kazakhstan, is also protected because then the taxes are paid, everything is regular. There’s no harm to the country, no harm to the migrant,” Keserovic said.

The process has also given countries a platform for gathering to make plans for emergency preparedness, as they did in a meeting in Turkmenistan earlier this year, when the participating countries of the Almaty Process made it clear that they will have to cooperate and create plans to handle the movement of people after natural or man-made disasters, he said. It has also led to increased data collection and reporting on human trafficking.

The process is supporting real, productive cooperation because migration is recognised as an issue that affects every country, and because the process is increasingly driven and owned by the participating states, the experts said.

“Migration is here, and it’s a common issue,” said Piotr Kazmierkiewicz, an international consultant and lead author on the Mapping on Irregular Migration project. “It’s not IOM that is coming with some external agenda. [Central Asian states] are having a problem, and they are making requests, actually; the latest research was requested by the government. The agenda is set here …. I think that is crucial.”

This success is something other regions can learn from. Kazmierkiewicz pointed out two major examples the countries of Central Asia are providing: working together, and accessing local information.
“One thing is that countries are learning from other countries in the region. A destination country like Kazakhstan is sharing its capacity, its knowledge, on how to manage migration and is helping the countries that are facing transit flows, or even countries of origin, which I think would be a great thing across the Mediterranean,” he said.

This is being achieved through trust – not a state often found between governments or between public and private organisations in Central Asia. Distrust was preventing collaboration and the sharing of information, Kazmierkiewicz said. “We actually had to persuade the authorities that all this is being done for the benefit of their policy, and that they remain free to adopt certain solutions.”
Through the Almaty Process, it was established that sharing information would benefit all parties, and that despite asking for technical assistance and recommendations, countries would remain free to adopt whatever solutions they chose. Understanding that this need not impinge on sovereignty is crucial for Europe, he said.

The second issue was access to operational information. After presenting information gathered in the field, Kazmierkiewicz was approached and asked where he’d gotten it. “And we said, we get it from local experts. The problem is that local experts cannot just approach the government and say, ‘OK, I’m an academic, here is my advice.’ It takes a process. And I think at least this part of the Almaty Process was about trust building and about persuading [law enforcement and other public bodies] that we are on the same side … that we really are on the same page, we really are interested in strengthening this country’s capacity to manage migration flows.”

In only two years, Kazmierkiewicz said, what began as controversial is beginning to seem commonplace, from the basic idea that migration can be governed and guided strategically to the need to protect migrant workers’ rights just like those of citizen workers, to legalise existing migration flows and to work with employers.

The Almaty Process has also shown that there is enough data and knowledge within Central Asia to handle their problems here, Keserovic said. “You do not need to be told by others. There is enough knowledge here, it just needs to be promoted and shared.”