By Altair Nurbekov in International on 5 October 2015 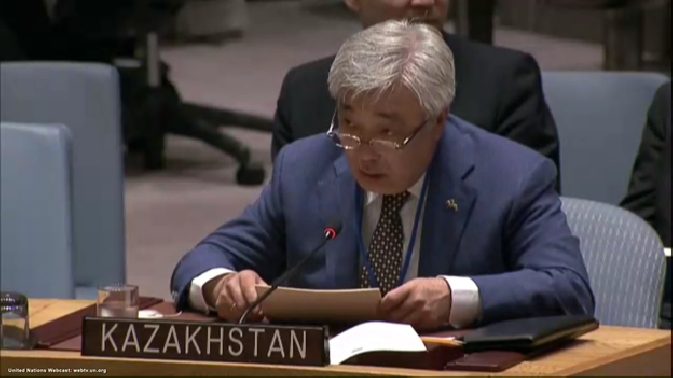 Minister of Foreign Affairs of Kazakhstan Erlan Idrissov speaks at the UN Security Council Open Debate on the Maintenance of International Peace and Security chaired by Russian Foreign Minister Sergey Lavrov on Sept. 30 in New York.

In his remarks, Idrissov pointed out Kazakhstan’s approaches to international problems. In his view, for decades the situation in the Middle East and North Africa has remained a destabilising factor for global security. He called on Israeli and Palestinian leaders to demonstrate political responsibility and goodwill to reach a historic peace agreement that would meet the legitimate aspirations of their peoples.

“As we celebrate the 70th anniversary of the United Nations, let us remind ourselves of last century’s events that humanity had to endure, including two world wars and revolutions. Their tragedy is the reason why today we must work towards peace and security. The Arab Spring proved that revolutions only hinder human development, throw societies backward and damage interstate relations,” Idrissov said.

Idrissov called the humanitarian disaster in Syria one of the most serious crises in the world, which has spread far beyond the Middle East and is no longer considered a regional issue. He noted that Kazakhstan supports efforts by the UN, the League of Arab States, the United States, Russia and other stakeholders to resolve the crisis. In his words, Kazakhstan firmly believes that the crisis should only be resolved through genuine political dialogue between the Syrian authorities and the opposition, aimed at a peaceful future without violence and bloodshed.

“In May, Kazakhstan hosted a meeting of Syrian opposition leaders, which provided an opportunity to discuss the political situation in Syria and possible solutions, such as the creation of a provisional government. The negotiations were based on the following key agreements: a need to follow the Geneva principles in finding a solution, the condemnation of all forms of terrorism and a collective call to end foreign paramilitary involvement,” he said. [Astana hosted the second round of such talks on Oct. 2-4, resulting in the adoption of a declaration outlining an Astana initiative, a proposed plan of action for finding political solution to the conflict.]

In his speech at the UN Security Council, Idrissov highlighted Kazakhstan’s international initiatives, such as the Conference on Interaction and Confidence Building Measures in Asia (CICA) and the Congress of Leaders of World and Traditional Religions, as well as hosting a regional conference on countering violent extremism in June 2015, which all provide platforms for political dialogue and cooperation to promote peace and stability.

In this regard, Idrissov drew attention to the new initiative of President Nursultan Nazarbayev on the establishment of a UN-led counterterrorism network that will unite efforts in the fight against terrorism. In his words, current UN mechanisms aimed at countering terrorism, including the UN Global Counter-Terrorism Strategy, should be legally binding through the adoption of UN Security Council resolutions.

In conclusion, Idrissov reiterated Kazakhstan’s commitment to collective efforts to fight international terrorism and to ensure peace in the Middle East based on freedom and justice for all.

Later, Idrissov continued bilateral talks with foreign colleagues on the margins of the UN assembly meeting.

International and bilateral issues were discussed during meetings with the foreign ministers of Guinea, Zimbabwe, Qatar, Colombia, Morocco, the United Arab Emirates, Trinidad and Tobago. Idrissov expressed hope for their support of Kazakhstan’s candidacy for a nonpermanent seat on the UN Security Council in 2017-2018. He also stressed the historical contribution of Kazakhstan to nuclear disarmament, as well as the implementation of sustainable development and the promotion of a Global South-South initiative.

Idrissov expressed confidence that a positive level of bilateral cooperation, as well as similar positions on international issues will be the key to successful cooperation.

In addition, Idrissov met with U.S. Under Secretary of State for Political Affairs Wendy Sherman. The sides discussed the results of talks between Nazarbayev and U.S. President Barack Obama held on Sept. 29.