By Aiman Turebekova in Sports on 6 October 2015

October 4 was a big day in Almaty. Not only did the city host Tour of Almaty 2015, a one-day professional road bicycle race, it saw a Kazakh team cyclist win his first monument, reported the Mayor’s press service. 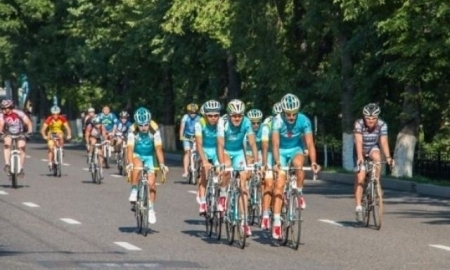 The event officially began with the presentation of the riders. Nineteen teams from 16 countries took part in the Tour of Almaty, including professional ones such as Astana PRO Team, headed by Fabio Aru, and the Russian Katusha.

Welcoming the participants and spectators, Almaty Mayor Bauyrzhan Baibek noted interest in cycling, carried out in an urban setting for the third time, is increasing every year.

“Last year, about 10,000 people visited this event and due to the Eurosport TV channel broadcast, more than 100 million people had a chance to watch the racing. Cycling has become one of the recognisable brands of the city. Thanks to the President of the country, Almaty has been transformed into a world sport centre and has the vast potential to bring up the tourism sector in a big way. Over the past few years, the metropolis hosted around a dozen world championships for a variety of disciplines and has over 1,100 sports facilities,” he said.

Akhmetzhan Yessimov, chairman of Astana EXPO 2017, the official sponsor of the race, said the Tour of Almaty is a familiar project to promote the country as well as the international exhibition. Yessimov, a former mayor of Almaty, then fired a pistol to start the race.

“For us, this race is a great opportunity to improve the city’s infrastructure, which we are improving for the Universiade 2017. Almaty citizens highly appreciate the organisation of the Tour of Almaty. Cycling is becoming more and more popular in our city. We will support this race in the future,” emphasised Baibek.

Alexey Lutsenko, a Kazakh road race cyclist who rides for the Astana team, was the winner, with Aru, an Italian professional road bicycle racer for UCI ProTeam Astana, taking second place. Pavel Kochetkov, a member of the Katusha team, received the bronze medal.

The participants each had to cover a distance of six laps of 31 km, making the total length of the route 186 km. Since 2013, the race has usually been held in October and is sanctioned by the International Cycling Union (UCI) as a 1.1 race as part of its Asian tour. 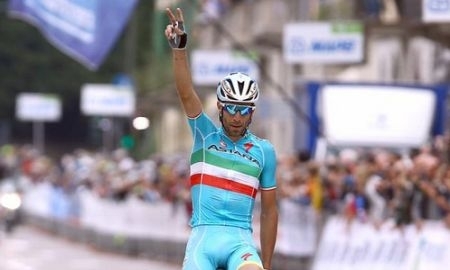 Nibali, who won the 2014 Tour de France, made his first attack on the Civiglio ascent.

“I’ve always wanted to win a race of this stature and of this kind and it was my time to win it,” he said at the finish. “To win a monument you also have to be lucky. It has been a great day.”
Nibali’s victory in the fifth and final monument of the season – the others being Milan-San Remo, the Tour of Flanders, Paris-Roubaix and Liege-Bastogne-Liege – is also the first by an Italian since Damiano Cunego won the Giro di Lombardia in 2008.

“I’m satisfied with my season. Things often went wrong, but thanks to my mental strength and determination I got things back on track and fought back. My season has ended well because I’ve won a monument, something an Italian hadn’t done for a long time. It’s a team victory because of the work everyone did. Now I hope to finish the season well in Abu Dhabi and then we’ll start thinking about next season,” said the Giro di Lombardia winner.