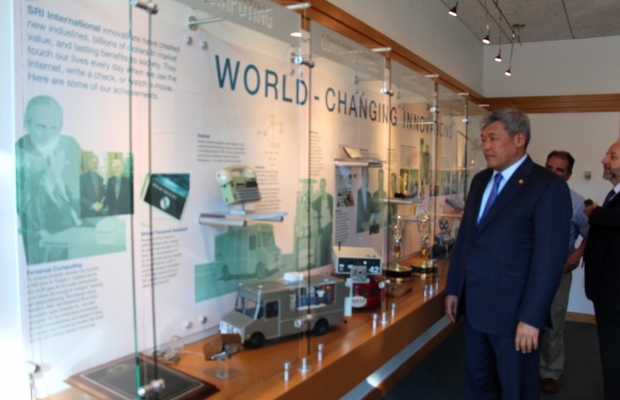 If his focus in the Big Apple was on the United Nations family of organisations, he paid much more attention in the Golden Gate City to luring America’s leading high tech companies like Google to presenting their know-how at the Future Energy-themed forum in Astana.

The good news from the meetings in New York was official confirmation from the United Nations Development Programme (UNDP) of its participation in the expo. The announcement was made as Zhoshybayev held talks with UN Under-Secretary-General and UNDP Administrator Helen Clark. The UNDP thus became the seventh international organisation so far to confirm its planned presence at the exposition.

Talking with Clark, Zhoshybayev highlighted the expo’s main theme and three sub-themes: reduction of CO2 emission, energy effective lifestyle and energy for all. Both agreed the topics are of global concern and would contribute towards implementing the UNDP’s initiative of “Sustainable Energy for All.” Clarke added she would encourage the participation of UN memberstates in the event.

The parties reportedly also discussed priorities of cooperation in the framework of KazAID, a soon to be launched national operator for Kazakhstan’s international development assistance. Clark welcomed KazAID’s potential to help increase cooperation along the South-South axis and said she looked forward to a successful implementation of the Kazakhstan-UNDP partnership programme for 2016-2020.

After moving from coast to coast, Zhoshybayev held talks with top management leadership and founders of companies such as Google, Obscura Digital, Planet Labs, Global Thermostat, С40 Cities Climate Leadership Group and GenYES. He also had sessions in the San Francisco Mayor’s office and at Stanford University.

At the meeting with Google, it quickly became clear the company was expressing significant interest in EXPO 2017. According to Brian Sullivan, Programme Manager at Google Ocean and Earth Outreach, the tasks and aims of the event correspond with Google’s mission. He added the corporation has begun cooperating with the UN on countering climate change and examining the best ways to use its technologies to help solve the issue. The American company plans to present its proposals related to the Google Earth project at the UN Climate Change Conference in Paris, scheduled for Nov. 30. Technical opportunities provided by Google Earth can be used to observe climate change on the planet through the decades, said Sullivan.

Google’s interest in participating in EXPO 2017 may offer a good opportunity for Kazakhstan to engage in joint projects with the global company and extend support to the world’s scientific and environmental community by providing access to quickly process huge chunks of data.

At the San Francisco mayor’s office, Zhoshybayev was briefed on the city’s leadership in advancing energy-saving technologies. California’s fourth-most populated city hosted an expo 100 years ago and considering its history and experience, Zhoshybeyev suggested sending a delegation to EXPO 2017 to present the best practices devised by the city in promoting sustainable urban development.

At Stanford, one of America’s most prestigious universities, the expo commissioner visited some of the advanced labs in the Department of Mechanical Engineering which actively engage in energy research.

Zhoshybayev spoke with department Professor Friedrich Prinz on ways to engage educational communities in preparations for the Astana expo. In turn, the academic shared his vision for development in the field of energy for the next 15 years, predicting the share of renewable sources in energy production will increase up to 30 percent. In this context, Prinz said the share of coal in global energy balance would decrease and that of natural gas would grow, while consumption of petroleum would stay the same and see no major changes.

The founder of Global Thermostat, one of the world’s most innovative energy companies, presented a prototype of the industrial installation designed to catch carbon dioxide from the burnt gas on thermoelectric plants or directly from the air. According to the prototype description, carbon dioxide is caught by blowing the burnt gas and air through special membranes, with the polymeric spattering catching the CO2. This technology is commercially viable, as the clean carbon dioxide emitted can be re-used for food industry needs, producing dry ice and in the oil and gas sphere to raise the debit of the old fields and create industrial gas. The company currently has 16 international patents in 147 countries and a module structure which facilitates its integration to existing thermal power plants.

Based on the results of the meeting, the parties agreed to install carbon negative technology equipment on the EXPO 2017 field which will catch carbon dioxide from the air with the further possibility of using it in bio-fuel. The American side expressed interest in presenting its inventions at the exposition.

In the Silicon Valley, Zhoshybayev met with the management and founders of Obscura Digital, which is engaged in creating large-scale 3D projections throughout the world. In addition, the company creates LED panels for stadiums and huge multimedia touchscreens and is very popular among Internet users. Obscura Digital’s most successful projects are the main mosque in Abu Dhabi, the video show on the roof of the Sydney Opera House, which had 32 million views in four hours, and a show on the Empire State Building in New York which had more than one billion watchers. Considering the professionalism of the collaborators and scale of the projects, these inventions could be successfully introduced at the expo. At the end of the meeting, the company indicated its readiness to present its opportunities at the exposition and render technical assistance for the event.

The large U.S. energy and industrial companies demonstrated a positive attitude towards participation in the exposition and are ready not only to show but also to implement their recent technologiesin the field of energy saving and effectiveness.

In New York, companies such as С40 Cities Climate Leadership Group and GenYES also demonstrated enthusiastic interest in the exposition, assuring they will propose a row of projects on CO2 emission reduction and renewable and alternative sources of energy to demonstrate in the expo’s best practices zone.

Following completion of the West Coast programme, the expo commissioner flew to South America where he held talks in the hope of securing the participation of Argentina and Brazil in the Astana event.

EXPO 2017 will be a major display of technological achievements, demonstrating the newest inventions of the 21st century in the field of alternative and renewable energy. The Kazakh government is paying significant attention to running successful preparations for the event.