ASTANA – The two brotherly ethnic groups of Kyrgyzstan and Kazakhstan share many common grounds and a long-time history. The cuisine, culture, musical instruments and even the languages are quite similar, according to chairman of the Kyrgyz ethno-cultural community centre in Kazakhstan Shavkat Ismailov. 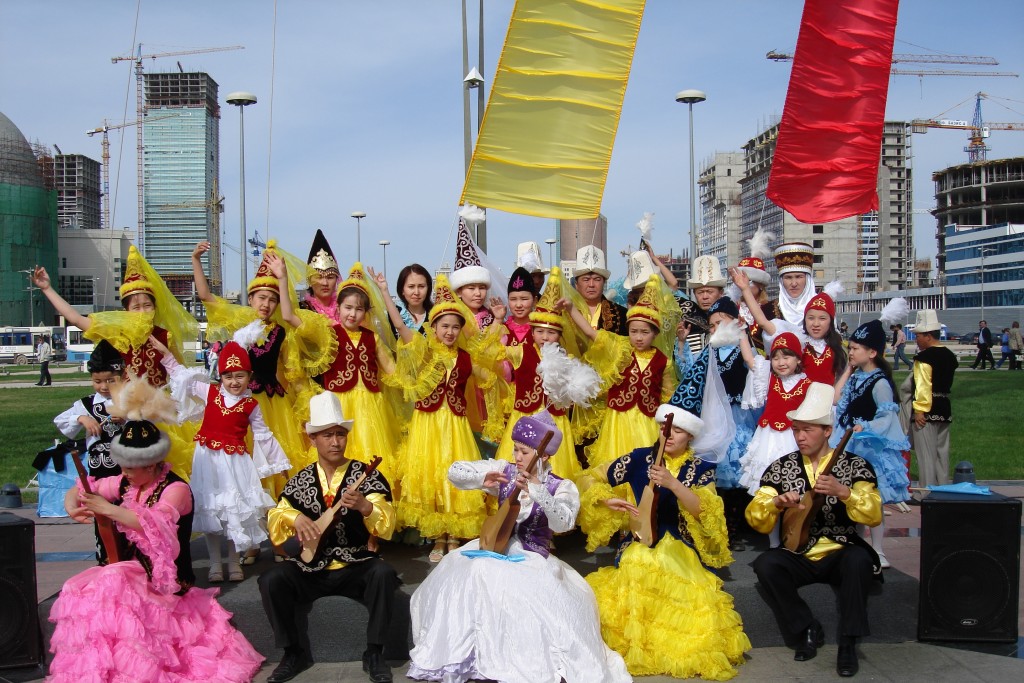 Members of the Kyrgyz community center in Astana.

“Today, there are some 30,000 ethnic Kyrgyzs with Kazakh citizenship living in Kazakhstan. Besides, about 18,000 Kyrgyzs have permanent residence and on top of that, between 30,000 to 50,000 Kyrgyz citizens travel to Kazakhstan each summer to work,” said Ismailov in an exclusive interview with The Astana Times.

“They are engaged in various activities; government clerks, business people, construction workers, service sector, sales, finances and so on,” he added.

Given the geographic location of the two countries, it is neither impressive nor surprising to discover that while at times seasonal, quite a large number of Kyrgyz nationals compose the 17 million Kazakhstan population. After all, the countries share a nearly 1,000-kilometre border where the heads of state oversaw the removal of customs control on Aug. 12 as part of Kyrgyzstan’s accession to the Eurasian Economic Union (EAEU), key components of which include promoting the four freedoms of movement of goods, services, capital and workforce.

According to the 61-year-old Ismailov, however, the Kyrgyz peoples settled on Kazakh territory centuries ago, in addition to the recent-decade migration waves from the country due to an unstable economic situation.

“Some Kyrgyzs have been living in the central parts of Kazakhstan from around the 17th century; these include the Eastern Kazakhstan, Akmola, Kokshetau and Karaganda regions. They are Kazakhs, but their structural tribal name is Kyrgyz,” he said.

Kazakhs and Kyrgyzs have tribal names which vary depending on the territory from which their ancestors hailed. The Kyrgyz peoples have assimilated in Kazakhstan, according to Ismailov, had mixed marriages and their identity has been overshadowed but not entirely lost.

Another wave of immigrants from Kyrgyzstan came in the middle of the 20th century during the years of raising the Virgin Lands. Some served in the Kazakh army and stayed, although the circumstances were quite different. The most recent immigration tendency was in the mid-1990s, after the collapse of the USSR and Kyrgyz economic decline.

“A lot of Kyrgyzs stay in Kazakhstan; they like to live in this country, raise children and learn the language.

One of the priorities of our centre is to help the newly-arrived assess and integrate socially and culturally in the Kazakh society,” said Ismailov.

The Kyrgyz ethno cultural community centre is very active in Kazakhstan, he added.

“Besides the language school and the choreography classes, studying the Kyrgyz legendary epos ‘Manas,’ hosting craft classes, offering komuz (Kyrgyz musical instrument) lessons and participation in all events held by the Assembly of the People of Kazakhstan, we have computer literacy classes for the handicapped, no matter the citizenship, at the National Academic Library and the Kazakh-Russian University,” said Ismailov.

“In a span of two years, our community centre had donated 12 computers; 135 students had successfully completed our computer literacy courses and six were employed so far. Also, on Aug. 29 we hosted a charity event for the needy children. Forty first-graders were given school backpacks with accessories for the school season,” he added.

The centre also helps in the search for missing relatives with the support of the national archives, Arabayev University in Kyrgyzstan and the Historical Museum of Kyrgyzstan, which spread the list of the missing relatives that keeps piling up on Ismailov’s desk via mass media channels.

“This turned out to be a whole new project. People ask us to help them locate their relatives and we can’t turn down their favours,” said Ismailov.

The legacy of ancestors saw light in a new symbolic, historic form through the Kyrgyz community centre.

“Once I received a manuscript of one of the versions of the famous Kazakh folk epic ‘Kyz Zhibek,’” he said.

The work was banned from the educational system in the 1950s and labelled “antinational.” It has no author and is considered folklore literature but had many versions, one of which ended up in Ismailov’s hands.

“It was given to me by the relatives of a former Kyrgyz gulag prisoner, Kuzebai Kuranov, who was imprisoned for political treason and exiled to a concentration camp otherwise known as Karlag near Karaganda in 1953. The 101-page manuscript was given to Kuranov by a Kazakh in the Karlag, whose name is yet to be determined under one condition – it was meant to be an ‘amanat,’ a duty to be carried out no matter the circumstances. In Kuranov’s case, the manuscript had to be delivered back to Kazakhstan where it was banned,” he said.

At the moment, the document is in Astana and is being studied by various scholars, historians and archivists. This ‘amanat’ has symbolically found its way back to Kazakhstan 60 years later and now can be considered accomplished, as per Kuranov’s request, with the help of the Kyrgyz community centre in Kazakhstan.