By Michelle Witte in Nation on 8 September 2015

ASTANA – The Hoope, a home detection kit to diagnose sexually transmitted diseases that was the brainchild of a team including Kazakh biotechnologist Damel Mektepbayeva, is expected to go into mass production next year, Forbes.kz reports.

“Each year, 500 million people get infected with one of the four most common sexually transmitted diseases,” a video for the Hoope project on the Singularity University website says. “We’re hoping we can create a behaviour change in teenagers by combining easy diagnostics with education at this crucial point in their lives. Nowadays, STD screening requires embarrassing, old fashioned, slow procedures with little privacy.” Hoope, in contrast, detects STDs without the need for a doctor’s appointment, trips to medical centres or parental notification. Hoope’s developers call it “Simple, instant and affordable.”

“Imagine yourself asking someone for a syphilis test in a drug store or carrying a package with the label ‘gonorrhoea’ to a crowded checkout counter,” Mektepbayeva told The Astana Times in a written interview on Sept. 7. “Or would you prefer to visit a specialised STD centre, and fill out a form for chlamydia testing? By the way, if you are positive, you might be added to a database of STD-positive people. Current STD testing is just too embarrassing, stressful, expensive and time consuming.” The team’s hope with Hoope, she said, is that it “will be as easily available as contraceptives that revolutionised the prevention of STDs. We hope that our devise will bring another revolution.” 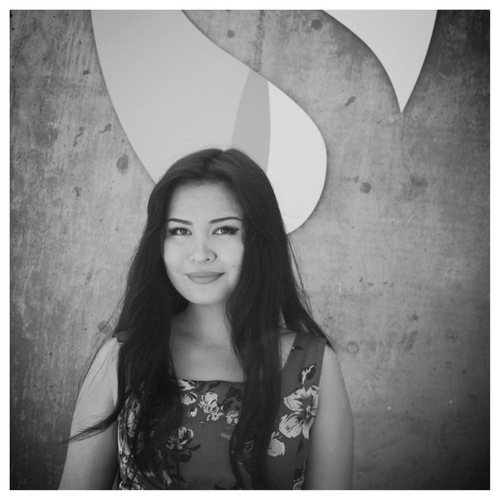 Hoope can detect chlamydia, syphilis, trichomoniasis and gonorrhoea, according to the project’s website. The device works by creating a small needle puncture in a user’s thumb and directing the resulting drop of blood direction onto a chip, which analyses it. If an infection is detected, one of four lights corresponding to the four diseases lights up on the ring. The results are then transmitted via Bluetooth to the user’s smartphone. The devices are expected to be packaged with three needles and chips, meaning each can be used three times.

The blood collection is made painless by “placing electrodes in the ring that transmit current to block the sensation of pain,” Hoope’s website says. Bio-waste is avoided by denaturating blood with special chemicals and by using a retractable needle. The analysis is conducted with their “lab-on-a-chip,” which uses a “low-cost, paper-based microfluidic device that uses capillary action and does not require pumps or additional power source.” Bioresponses are converted into electronic signals through an electrochemical reaction and sent to the users’ phone.

When the results are collected, the Hoope smartphone application shows information regarding sexual health, including nearby clinics, and follow-up recommendations to their test results.

The team dreams of putting Hoope into large-scale production, but the date of production depends on the speed of their research – and on continued investment. So far, the project has won the World Startup Competition 2014 in South Korea, taking home a $20,000 prize, as well as other technology and startup contests. Mektepbayeva says they hope to attract investors and experts who know their target market in the U.S.

The team is confident that there is interest in their product. “Just in four days we got responses from more than 200 people in 10 different countries. We found out that young adults want to use our product. They want to know if they are STD-free. They want to get more information about sexual health. They say that Hoope ring is beautifully designed and makes the testing procedure less scary and embarrassing,” Mektepbayeva said.

They are looking at a price point of $50 for a package of one ring and three one-use cartridges, she said, and they would need to sell only 30,000 such packages to break even. “Economies of scale will allow us reduce price and bring our technology to low-income countries and impact millions of people,” she added.

The team is working in three countries, according to the Forbes.kz report on the project. “We are developing three countries. In Mexico, we are engaged in research and development of hardware, in Peru are developing software and in Kazakhstan we carry out scientific research in the field of biotechnology and are developing a diagnostic laboratory on a chip,” Mektepbayeva said in that interview.

The Hoope team includes Mektepbayeva, Irina Rymshina of Russia and Ukraine, Ernesto Rodriguez Leal of Mexico and Pawel Jarmolkowicz of Poland. The three are members of the Graduate Studies Programme at Singularity University. In the programme, teams are challenged with the task of positively impacting the lives of billions of people within 10 years: the Hoope device came out of that challenge. Singularity University is located on the territory of the NASA Research Centre in California.