At UN, Nazarbayev Proposes Developing Global Strategic Initiative to Be Implemented by 2045

NEW YORK – President of Kazakhstan Nursultan Nazarbayev took part in the General Debate of the 70th session of the United Nations General Assembly (UN GA) in New York Sept. 28 where he outlined Kazakhstan’s position on the most pressing international issues and voiced proposed solutions. 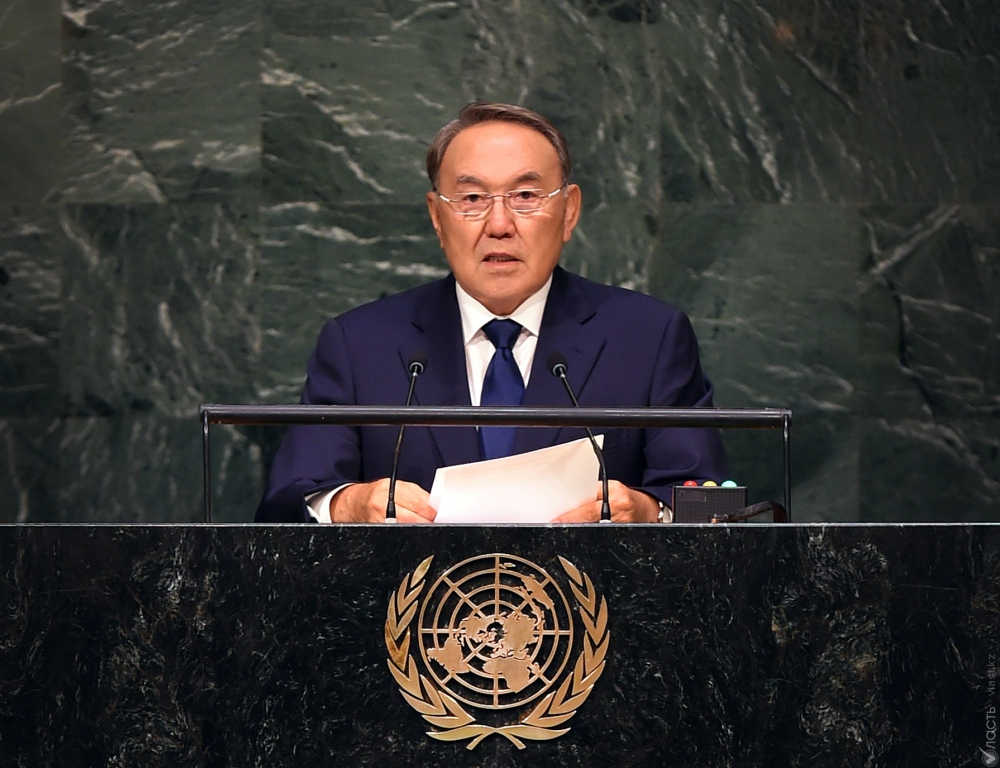 Nazarbayev said Kazakhstan supports initiatives aimed at restoring trust in international relations and strengthening peace and security based on international law.  For seven decades, the world has sought an effective formula to resolve conflict, he said, yet disputes have only grown more sophisticated and complex, an evil that stems from destroyed statehood.  He urged shifting from routine conflict prevention and post-conflict rehabilitation to a new development strategy that rendered conflict senseless.

In that context, he proposed the creation of what he called a 2045 Global Strategic Initiative Plan that would launch a new trend in global development based on fair conditions in which all nations have equal access to infrastructure, resources and markets.  For that purpose, he urged transforming the Economic and Social Council into the Global Development Council with states elected by the General Assembly and heads of all United Nations specialised agencies acting as a global economic regulator.  A draft world anti-crisis plan was under discussion at the Astana Economic Forum over the past few years.

He said clear rules must be created for the trade of global reserve currencies, which today do not meet the criteria of justice, democracy, competitiveness and international control.

“In the 21st century, our world needs qualitatively new instruments. The UN member states need to combine their efforts to create a new supranational currency, which should be relevant to the targets and tasks of global sustainable development and prosperity,” Nazarbayev said.

Nazarbayev also reaffirmed his earlier proposal of a universal declaration to achieve a world free of nuclear weapons.

Nazarbayev mentioned that signing the agreement on the establishment of an International Atomic Energy Agency (IAEA) bank of low-enriched uranium in the country is an important step that the world should acknowledge as a safe use of the atom.

According to Nazarbayev, the erosion of international law and the weakening of global institutions is a dangerous challenge.  He cautioned against the arbitrary imposition of sanctions, which contravene the United Nations Charter and international law.

“The right to impose international sanctions that can damage the well-being of millions of people should remain the exclusive prerogative of the security council,” he said.

Nazarbayev advocated for the peaceful settlement of the Ukrainian crisis and full implementation of the Minsk agreements.  More broadly, he proposed establishing, under United Nations auspices, a global network to counter terrorism and extremism.  The 2045 global strategic initiative plan could include a NEW FUTURE concept to define the goals of the next stage of human development.

The President of Kazakhstan announced that EXPO 2017 in Astana will have a theme of Future Energy which would also support the UN initiative “Sustainable Energy for All.” .

“We invite all states to participate fully in the exhibition. Looking to the future and using the infrastructure put in place for EXPO 2017, I suggest opening in Astana an international centre for the development of green technologies and investment projects under the auspices of the UN,” he said.

Nazarbayev also urged participants to support the candidacy of Kazakhstan for the position of a non-permanent member of the UN Security Council for 2017-18.

Before the debates, Nazarbayev met with UN Secretary-General Ban Ki-moon and discussed the post-2015 sustainable development agenda, as well as the importance of regional cooperation and the activities of the United Nations Regional Centre for Preventive Diplomacy for Central Asia (UNRCCA).

Nazarbayev and the Secretary-General also discussed the challenges posed by violent extremism and terrorism and the preparation of the UN Plan of Action to Prevent Violent Extremism.

Nazarbayev congratulated Bettel on the chairmanship in the European Union (EU) and expressed hope that the newly signed agreements between Kazakhstan and the EU would be ratified soon.

Nazarbayev invited Polish companies to establish cooperation with Kazakh entities and said that in doing so they would operate under preferential conditions in Kazakhstan.

During the visit, Nazarbayev met with representatives of major U.S. companies, such as Guggenheim, JP Morgan, Pfizer, Blackstone. In addition, he held meetings with Vice Minister of the International Financial Corporation Jin-Yong Cai and Executive Chairman of the Board of Cisco Systems Corporation John Chambers.