By Aiman Turebekova in Nation on 22 August 2015

ASTANA – The regular meeting of the Dialogue Platform on Human Dimension, a consultative advisory body, was held on Aug. 21 at the Kazakh Ministry of Foreign Affairs. Chaired by Kazakh Ambassador-at-Large Usen Suleimen, the session was attended by Maina Kiai, the United Nations (UN) Special Rapporteur on the rights to freedom of peaceful assembly and of association. 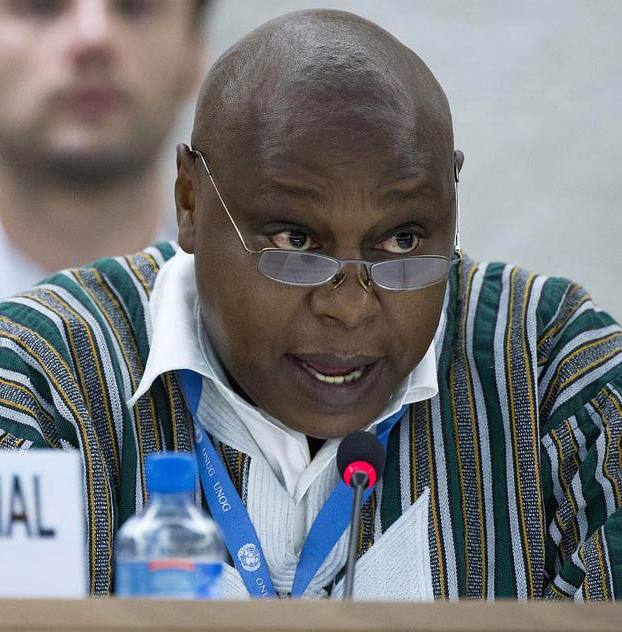 The Dialogue Platform on Human Dimension has served since 2013 as the format for regular interaction between government agencies tasked with protecting human rights and civil society organisations involved in the same issue.

Kiai’s recommendations and those of UN Special Rapporteur Baskut Tuncak regarding the adverse effects of the illicit movement and dumping of toxic and dangerous products and wastes were discussed.

Tuncak visited Kazakhstan March 26-April 8 to assess the country’s human rights record regarding the management of hazardous substances and wastes. During his 14-day mission, the special rapporteur travelled to several cities and towns known for pollution attributed to the oil and gas industry, metal extraction and processing, uranium and coal production and industrial emission and wastes.

Tuncak commended the Kazakh government for ratifying key international human rights treaties and environmental conventions, as well as the authorities’ efforts to try and find a solution to those individuals at risk.

In accordance with his recommendations, experts in the field of ecology, as well as representatives of the Kazakh Ministry of Energy and NGOs, shared their views and read their reports during the meeting on the current situation in relation to the disposal of hazardous substances and wastes.

“In the report it was noted that in Kazakhstan there is no integrated system of waste management, but I would like to say that the country is working on waste management and control of compliance with environmental legislation of natural resources in terms of education and distribution of industrial and municipal waste,” said Bizara Dosmakova, deputy director of the Ministry of Energy waste management department.

Ventures were also announced in conjunction with the United Nations Development Programme (UNDP) projects in Kazakhstan aimed at assisting the government in solving the problem of hazardous waste and chemicals. The project to develop and implement a comprehensive plan to manage PCBs was executed due to cooperation of the UNDP, Global Environment Facility and Kazakh government. As a result, 232 tonnes of waste containing persistent organic compounds were safely destroyed.

In the framework of the project on energy efficiency, local authorities are working to collect and recycle resident’s mercury-containing lamps. Another UNDP project, “Updating the national action plan; integration management of persistent organic pollutants in the process of national planning and management of health care waste management in Kazakhstan,” is aimed at solving the issue of controlling obsolete and unusable pesticides.
Vadim Ni, chairman of the Kazakh eco-forum of public organisations, spoke regarding the difficulty concerning public access to environmental information. He highlighted the issue for individuals to secure information and advised solving the problem by discussing future industrial projects with the population in advance.

Dosmakova noted the information was in accordance with the UN Economic Commission for Europe (UNECE) convention on access to information, public participation in decision-making and access to justice in environmental matters, known as the Aarhus Convention. The document, signed June 25, 1998 in the Danish city of Aarhus, became effective October 30, 2001.

“Article 163 of the environmental code of Kazakhstan, which regulates the right of access to environmental information, is fully consistent with the principles of the Aarhus Convention,” she said.

The deputy director added the document did not include information on the existence of the national report about the current environmental situation and use of natural resources, which can be found on the Ministry of Energy website.

The public’s main concern in terms of the environmental safety of living conditions surfaced in 2014-2015 through numerous cases of people affected by the negative impact of the environment in the villages of Berezovka in the Western Kazakhstan region and Kalachi of the Akmola region, said Ni.

In this regard, he offered to discuss the question about the procedures for recognising the status of internally-displaced persons and obtain the right to appropriate assistance from the state.

The parties also talked about the importance of the G-Global platform, a virtual international place within the Astana Economic Forum created by the Eurasian Economic Club of Scientists, and the relevance of green technologies. The international specialised exhibition EXPO 2017 in Astana will address the possibilities of future energy in an effort to promote the most appropriate and viable sustainability-driven action plans.

“Expo 2017 means access to energy for all,” said Saltanat Rakhimbekova, managing director of Astana EXPO 2017.
The second part of the meeting focused on discussions of Kiai’s recommendations, whose report was presented to the UN Human Rights Council during its 29th session in June. The visit was carried out pursuant to his mandate to assess the situation of freedoms of peaceful assembly and association in Kazakhstan. The special rapporteur concluded his visit by challenging the government to build on its achievements in the economic arena during the past 23 years by facilitating and opening up democratic space, in particular the rights to freedom of peaceful assembly and association.

In response, deputy director of the department of international law of the Kazakh Ministry of Justice Alua Nadirkulova said the recommendations have been accepted and the necessary process to further improve legislation in this area was launched.

The meeting also included the presentation of two European Union (EU) projects implemented in Kazakhstan within the framework of European instruments for the promotion of democracy and human rights.

The first phase of the three-year project, from October 2013-October 2016, addresses the issue of violence against children deprived of their liberty in Kazakhstan, Kyrgyzstan and Tajikistan by promoting an end to the use of child solitary confinement and their effective separation from adults at all times and in all detention facilities.

The second segment is the Kazakh national preventive mechanism.

“The purpose of the project is to enhance the role of civil society in the prevention of torture and other cruel, inhuman or degrading treatment or punishment,” said Azamat Shambilov, regional manager of Penal Reform International, which has been working in the Central Asia region since 2001.