The agreement between the Government of Kazakhstan and the International Atomic Energy Agency (IAEA) to establish an IAEA low enriched uranium (LEU) Bank in Kazakhstan is a significant milestone in this important endeavour. 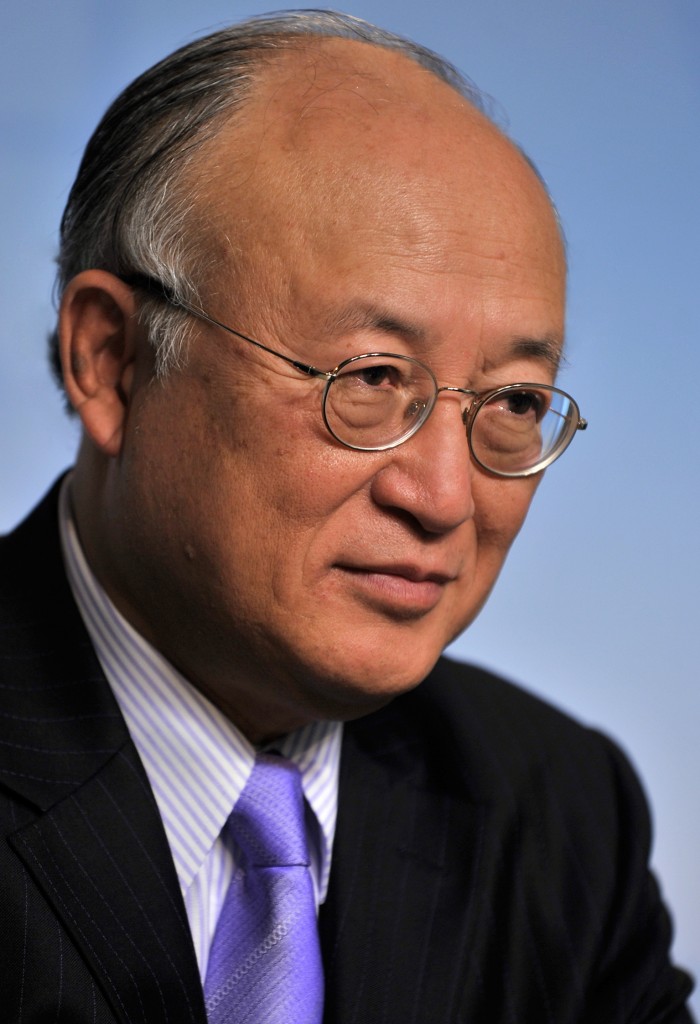 In December 2010, the IAEA Board of Governors authorised the establishment of a reserve of low enriched uranium as a supply mechanism of last resort to provide confidence to countries that they can obtain LEU that would be used for the manufacturing of fuel for nuclear power reactors in the event of an unforeseen, non-commercial disruption to their supplies. The following year, Kazakhstan, which has six decades of experience in the safe and secure storage, handling and supply of civilian nuclear material, volunteered to host the IAEA LEU Bank.

Now, after three years of constructive negotiations, including legal and technical work, Foreign Minister Erlan Idrissov, Energy Minister Vladimir Shkolnik and I will meet in Astana on Aug. 27 to sign a Host State Agreement and related technical accords. These agreements complete the legal framework and will launch full-scale implementation of the project at the Ulba Metallurgical Plant in Oskemen.

In many ways, it is fitting that the IAEA LEU Bank should find its home here.

Kazakhstan has an exemplary record of contribution to non-proliferation. Under President Nursultan Nazarbayev, Kazakhstan voluntarily renounced the nuclear weapons which it inherited from the Soviet Union, closed the Semipalatinsk Nuclear Test Site, and joined the Nuclear Non-Proliferation Treaty as a non-nuclear-weapon State, and signed a comprehensive safeguards agreement and additional protocol with the IAEA. It also played a leading role in the creation of a nuclear-weapons-free zone in Central Asia in 2009.

Hosting the IAEA LEU Bank is the latest and very important contribution by Kazakhstan to international nuclear cooperation. I offer my gratitude to President Nazarbayev as well as the Government and people of Kazakhstan.

Kazakhstan and the IAEA enjoy a fruitful relationship of broad cooperation. Kazakhstan and the Agency are working together as the country moves forward with its plan to launch a nuclear power programme. The IAEA is also assisting the modernisation of systems at a Kazakh research reactor, as well as helping to transform the former Semipalatinsk Nuclear Test Site into an area of economic benefit.

Helping countries to benefit from the peaceful use of nuclear technologies and applications is a central area of the IAEA’s work. Our assistance covers areas including human and animal health, food security, water management, electricity generation, and environmental protection – to name just a few. These efforts are all part of our contribution to the achievement of the United Nations Sustainable Development Goals (SDGs).

In fact, people are often surprised at some of the things we do.

For example, during the latest Ebola outbreak in West Africa, we supplied affected countries with simple kits so they could diagnose the disease more quickly – in four hours rather in four days.

The IAEA is also assisting Member States in Central Asia – including Kazakhstan, Kyrgyzstan, Tajikistan and Uzbekistan – in their efforts to confront the challenges of global warming. Such initiatives include helping to develop more drought-resistant strains of cotton, assess water resources, and increase the nutritional content of staple foods. In one such project, IAEA and Kazakh scientists are using nuclear techniques to boost the quality and output of wheat and maize grown on Kazakh farms.

The IAEA also does a lot of work in nuclear medicine, including helping cancer patients in many countries gain access to modern nuclear medicine. Together with Kazakhstan, we are helping to establish a dosimetry centre for cancer therapy and working to improve the quality and safety of radiotherapy services.

Kazakhstan has also been a generous Member State of the IAEA, contributing funds to our ReNuAL Project. Its aim is to revamp the IAEA’s nuclear applications laboratories near Vienna, which offer training to scientists, support research in human health, food and other areas, and provide analytical services to national laboratories. Our goal is to turn the 50-year-old complex into fit-for-purpose labs by 2017 to meet Member State needs for the next 20 years.

Kazakhstan’s contribution to ReNuAL is a good demonstration of its active interest and participation in the work of the Agency.

It’s in this context of fruitful cooperation that the IAEA LEU Bank will take root. The Bank will be a reserve of up to 90 metric tonnes of LEU, the basic ingredient for fabricating nuclear fuel. Stored in secure steel cylinders, the LEU will be suitable for making fuel for a typical light water reactor – the world’s most widely used power reactor – sufficient to generate enough electricity for a large city for three years.

The IAEA, it should be noted, has also played a part in the establishment of other, complementary mechanisms that provide confidence in the assurance of nuclear fuel, including a guaranteed physical reserve of LEU was established by the Russian Federation at the International Uranium Enrichment Centre in Angarsk.

How will the IAEA LEU Bank work? If an IAEA Member State is unable to obtain low enriched uranium, it can ask the IAEA for a supply as a last resort. Such a request would have to meet certain criteria, such as a disruption of LEU supply to a nuclear power plant, or an inability to secure LEU on the commercial market or through State-to-State arrangements.

The country would also need to have a comprehensive safeguards agreement with the IAEA in force and no issues relating to safeguards implementation in that country under consideration by the IAEA Board of Governoers. It would pay the cost to restock the IAEA LEU Bank and could use the LEU only for the peaceful purpose of making reactor fuel. Further enrichment, reprocessing or retransfer would not be allowed without the prior agreement of the IAEA.

One guiding principle of the IAEA LEU Bank is that it must not distort the commercial market. Nor does it affect the right of an eligible recipient country to develop its own nuclear fuel cycle facilities.

Funding has been provided entirely by voluntary contributions. I am grateful to the donors who have furnished a total of $150 million, including $400,000 as well as in-kind contributions from Kazakhstan, to establish the IAEA LEU Bank and operate it for at least a decade.

With expertise developed over decades, Kazakhstan, the world’s leading producer of uranium, is well suited to host the IAEA LEU Bank.

The Ulba Metallurgical Plant is a licensed nuclear site with commercial-scale operations and the infrastructure to safely and securely store, transport, and process LEU. Oskemen, for its part, is an important administrative centre with a large metals and mining industry.

The agreements to be signed in Astana mark an important milestone and are a further example of IAEA-Kazakhstan cooperation. On behalf of the IAEA, I express my sincere appreciation to the Government and people of Kazakhstan and I look forward to a future of ever closer cooperation.

The author is Director General of the International Atomic Energy Agency.