By Kamila Zhumabayeva in Culture on 10 August 2015

ASTANA – American band Break of Reality (BoR) and Kazakh artist Galymzhan Moldanazar met in Almaty in February. The musicians rehearsed and gave two concerts together attended by hundreds of residents and guests of the city. The band arranged Moldanazar’s visit to New York in May, inviting him to come earlier and perform in their concert in Manhattan’s Highline Ballroom. Moldanazar arrived May 26 and together they performed one of the Kazakh musician’s original songs, “Akpen Birge” (which can be loosely translated from the Kazakh as “Be on the Better Side”). While in Central Asia, the band visited Turkmenistan, Azerbaijan and Kazakhstan as part of their programme to collaborate with local musicians and make music together, said BoR’s percussionist Ivan Trevino in the film “Zhana-York of Moldanazar.”

“We had a lot of great musicians but one in particular really stuck out to us … an amazing singer and songwriter Galymzhan Moldanazar. As soon as he sang his first lyric, everything just stopped … and we thought this guy is extremely talented. It would be wonderful to collaborate with him beyond just our tour,” he said. “This was the first time Galymzhan had ever left Kazakhstan and he didn’t speak English, but I think his music is pretty universal.”

Moldanazar told Hit TV, Kazakhstan’s music and entertainment channel, that he is inspired by his surroundings, people and everyday causalities of life as well as his own life and disposition.

“I often ride public transport and like to observe people and their moods from a back seat,” he said.

Moldanazar’s music videos were shot as home videos with mobile phones and computer web cameras to show his life as it is.

“I don’t think it is important to show what you don’t really have or what you really are not,” he said in the Telemasterskaya Production House programme.

Before the Kazakh musician became recognised in his native land, he had a long and hard struggle with money, his own place to live and his profession.

“I lived where nobody did … on the streets for a couple of days when I couldn’t pay the rent. Some days my worry was what food I would have for dinner. This year, things started to get better with my work and life with my family,” the musician said in the programme.

“Nobody needed my songs when I was writing and composing them by myself and I was nobody in Almaty, writing lyrics for singers and selling my original records for a very low price,” Moldanazar stated in the programme. “People only wanted to take advantage and use my work for their own benefit.”

Moldanazar teaches indie, rock and country music to two of his first students and does it only for the sake of music. In the same way, he writes and composes his own songs for that purpose.

“Indie and rock music are not the kinds of music that can earn you a lot of money. I don’t think I can perform at weddings,” he said. “People were telling me ‘be a man and get a real job,’ but they did not understand me at all.”

The artist stressed music is his only way of life. The ambitious musician would not give up his dreams in the face of obstacles and didn’t allow anyone, not even his family, to stand in his way to success. That determination has led him to collaborative offers from the U.S. and Commonwealth of Independent States (CIS) and some European countries.

Moldanazar’s music genres span British folk music to today’s electronic music, including synthpop, electro pop, Britpop and pop rock. His songs such as “Kim Ol?” “Alistama,” “Meniki Emes,” “Kosh Bol,” “Aldama,” and “Berik Bol” broke all the stereotypes of Kazakh stage music. His dream of composing songs in his native language and having them heard outside Kazakhstan is slowly becoming a reality.

Moldanazar was born in the Kyzylorda region and learned to play guitar while in school. As he started to write his first songs, he moved to Almaty to study at Temirbek Zhurgenov Kazakh National Academy of Arts but ultimately left because he didn’t find the programme to be suitable.

The artist chose music over his studies, the area where he now devotes all his time and effort. He first performed as a solo act, then formed the band “Moldanazar.” The humble and talented musician always tries to improve himself, researching and experimenting in new directions.

“The most important thing is to keep going,” he told Art Focus programme on Kazakh TV.

Moldanazar spoke about the transition from soloist to band performer.

“I am a street musician not used to working in a team. I was usually singing with my guitar and stopping anywhere I wanted, but now I have do everything differently which is difficult but I like it,” he said about his collaboration with BoR on the Kazakh Gakku TV music channel. 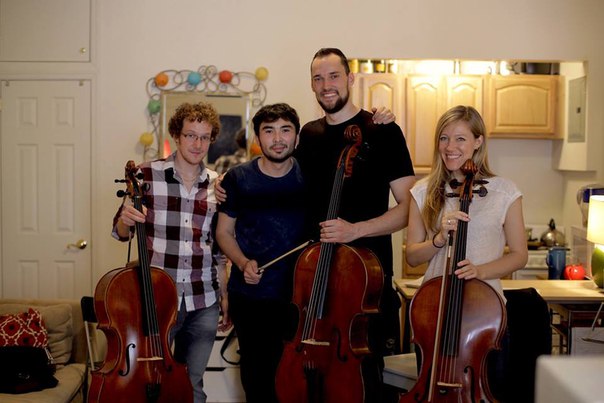 Trevino gave an interview to “The Astana Times” about BoR’s collaboration with Moldanazar.

How did Break of Reality get the idea to collaborate with Galymzhan Moldanazar? What were the reasons for it?

We were first introduced to Galymzhan in the living room of Chaz Martin, public affairs officer at the U.S. Consulate General in Almaty. Break of Reality was touring Kazakhstan through a programme called American Music Abroad and Chaz invited our band and Galymzhan to meet at his home in Almaty. We shared dinner, drinks and played music together. It was a beautiful moment. An American band and a Kazakh singer, speaking different languages, communicating through music. After a few performances in Almaty, we began talking with Galymzhan about flying him to the U.S. to collaborate on a recording project.

A few months later, Galymzhan was in our living room in New York. We recorded a Break of Reality version of his song “Akpen Birge” and also a music video to go along with the track.

Galymzhan is such a beautiful singer and songwriter. His voice is pure, a perfect fit with our band’s sound of cello. We love his song “Akpen Birge” and thought an acoustic, more “unplugged” version featuring Break of Reality would be powerful. We also wanted to showcase Galymzhan’s talents in front of our American audience. the wonderful talent from Kazakhstan.

What were your the first impressions about Galymzhan?

The first time we heard Galymzhan sing was in Chaz’s living room. The room went silent and everyone gravitated towards Galymzhan. He sat, played his guitar and began softly singing a song. It was beautiful. We had no idea what he was singing about, but we knew immediately that he was a special artist. That night was filled with music. We rehearsed, learned songs together and became friends.

What are your expectations from this collaboration?

Our music video and single for “Akpen Birge” is now available across the Internet. People can purchase the audio track on iTunes and can watch the music video on YouTube. Our goal is to reach audiences in Kazakhstan, the U.S. and beyond. While Galymzhan sings in Kazakh, we believe his music is universal and can affect people across the world. We have received so many wonderful comments from non-Kazakh speakers who have been touched by the song.

Would Break of Reality like to record more songs or an album with Galymzhan?

While in New York, Galymzhan and I had a great conversation about future projects. We are hoping to record a collaborative EP together; maybe five original songs featuring Break of Reality.

What are Break of Reality’s next steps?

Our band has a big tour coming up in Brazil. We will be soloists with the Brazilian Symphony Orchestra, performing in Rio de Janeiro, Sao Paulo and Brasilia. We are very excited about this opportunity, as it is our first time to perform in South America. Also, we would love to return to Kazakhstan for another tour! It was such a wonderful experience and we felt so welcomed by your audiences. A return to Kazakhstan is definitely in our plans.

BoR is an American cello rock band that originated in Rochester, New York and was founded by Trevino and Patrick Laird when both were students there at Eastman School of Music. Although they were taught strictly classical music in their conservatory, Laird and Trevino’s love for rock music drove them to create their own band called “Break of Reality.” The group consists of three cellists and one percussionist.

BoR’s “Solid Ground,” “Helix” and “Reigns of Castamere” are among the band’s original works and the one that made them more famous is the cello cover for the theme song of the American television series “Game of Thrones.” BoR has released a number of albums, “Spectrum of the Sky,” “The Sound Between,” “Voiceless” and “Ten.”

“Break of Reality developed a sound all their own while growing a fan base full of loyal followers who have stuck by their side for the last 12 years,” wrote The Sound Live.