By Michelle Witte in International on 25 August 2015

ASTANA – The ATOM Project (“Abolish Testing: Our Mission”) is again calling for a worldwide moment of silence to honour the victims of nuclear weapons testing on Aug. 29, the United Nations International Day Against Nuclear Tests. 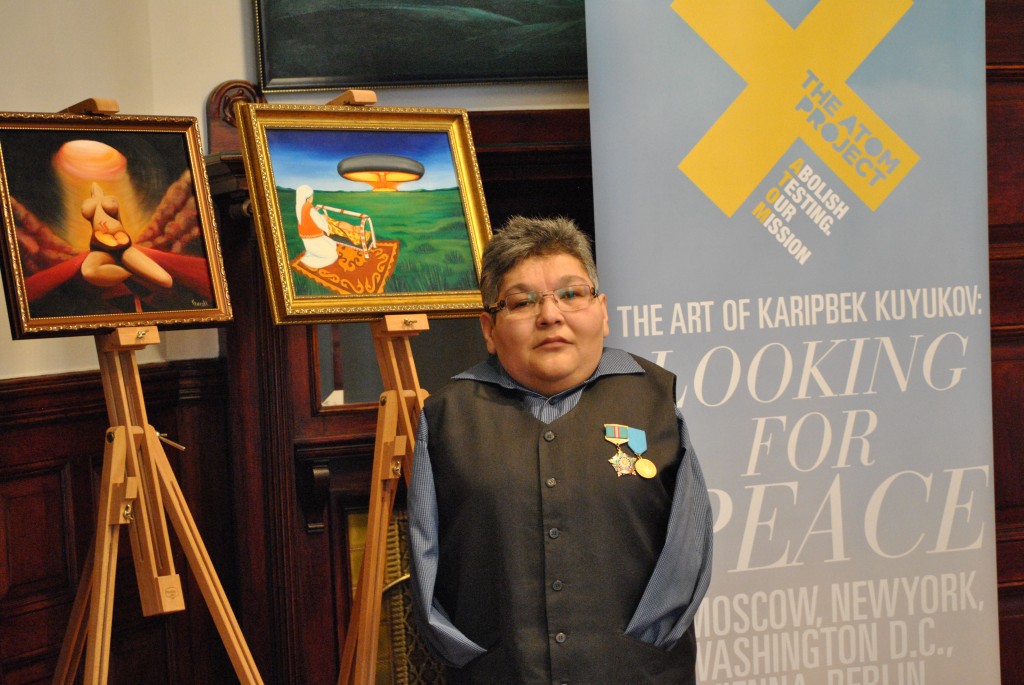 “We are calling for people around the world to observe 11:05 a.m. their local time as a moment of silence,” said The ATOM Project Honorary Ambassador Karipbek Kuyukov in a press release by the project. “That time was chosen because the clock hands show a V, which stands for victory. This moment is meant to signify a victory of common sense over fear and a victory for global efforts towards a nuclear-weapons-free world.”

The ATOM Project, an online petition campaign launched in 2012 to help galvanise public opinion against nuclear testing and to achieve the early entry into force of the Comprehensive Nuclear-Test-Ban Treaty (CTBT), now has more than 200,000 electronic signatures. Kuyukov was born in Semey, near the area where more than 40 years of nuclear testing by the Soviet Union took place. Despite being born without arms, Kuyukov became an artist and a campaigner against weapons testing anywhere in the world.

This year, The ATOM Project team also plans to join the Federation of Judo Veterans in a peaceful march in front of Astana’s Alau Sports Palace on Aug. 29. The march will observe the moment of silence, and then release white doves and balloons in honour of victims.

UN Secretary-General Ban Ki-moon has issued a message on this year’s International Day against Nuclear Tests. “This year marks the 70th anniversary of the dawn of the nuclear age,” the message reads. “Seven decades ago, the Trinity Test unleashed the power of more than 20,000 tonnes of TNT and precipitated over 2,000 additional nuclear tests. Pristine environments and populated communities in Central Asia, North Africa, North America and the South Pacific were hit. Many have never recovered from the resulting environmental, health and economic damage.”

The best way to honour victims of tests is to prevent future testing by signing and ratifying the CTBT, the message continues. “The CTBT is essential for the elimination of nuclear weapons. It is a legally binding, verifiable means by which to constrain the quantitative and qualitative development of nuclear weapons. Nearly two decades after the CTBT was negotiated, the time has long passed for its entry into force.”

The CTBT, which would ultimately ban all nuclear explosions in all environments for either military or civilian purposes, was adopted by the UN General Assembly in 1996 but cannot be enacted until China, Egypt, India, Iran, Israel, North Korea, Pakistan and the U.S. both sign and ratify it. So far, 183 states have signed the treaty and 164 ratified it.

Kazakhstan, which initiated the Aug. 29 International Day against Nuclear Tests, was the site of more than 450 nuclear weapons tests by the Soviet Union from 1949 to 1991. In September, Kazakhstan and Japan will begin a two year co-chairmanship of the conference to enforce the CTBT for two years.