ASTANA – A team of researchers at the Department of Scientific Capacity at Nazarbayev University have been working to develop a new concept in interactive, unconventional advertising that they think could change the way advertising is perceived. 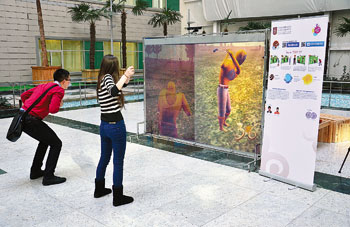 The new concept in interactive advertising was developed by a team of researches at the Department of Scientific Capacity at Nazarbayev University aiming at companies offering discount services.

“Approaching a poster, showcase or multimedia screen, we see a static image or video and it does not matter whether we like it or not—the picture remains the same. I want to change [that concept] and create an advertisement that would know what consumers want and would give them information accordingly,” explained Kairat Aitpayev, researcher at the Department of Scientific Capacity of Nazarbayev University, the think tank behind the project.

Emerging marketing and advertising tools like posters, billboards, social media, 3D and more are facing pressure to get more creative and interactive as modern consumers are pampered with high-tech gadgets and toys. Today, the average consumer wants to use touch to make a purchasing decision, and this is exactly where Aitpayev’s new concept might make a splash in the advertising industry.

“There are millions of ways of introducing a product. Even if a company offers high-quality goods and services at low prices, owners won’t make sales if consumers are not aware of their offerings. Interactive advertising enhances your offerings very effectively when it is added to traditional advertising. That’s why we propose to create interactive advertisements that will interact with customers in real time. This type of advertising will be able to recognise passing people, their positions and gestures, and provide different types of content to attract people,” Aitpayev said.

The original idea came to Aitpayev two years ago. The possibilities for its implementation emerged recently, however, when he was hired by Nazarbayev University’s Department of Research and Innovation System (NURIS). “I created a prototype in November 2012, after which the Department of Commercialisation paid me some attention,” he said. “Afterward, I wrote a proposal to commercialise this project and on May 29, I received official funding. So we can officially consider May 29, 2013, the starting point of the project.”

The project won’t grow, however, without finding a fit with business needs and interests.

“Advertising agencies are looking for new and unconventional opportunities in advertising,” Aitpayev said. He is aiming mostly at companies offering discount services, like Chocolife, Besmart and Kupikupon. He is also using a gaming approach to ads.

“Our team developed a concept called ‘Earn a discount by yourself,’” Aitpayev explained. “Potential customers play games and instead of earning points, they earn a discount on merchandise, which they can use when making a purchase. All this will happen outside the store, at the shop front, using only gestures and movements of the body. We’ve already had one test, with the Meloman holding… we made games to earn a discount where customers used their bodies as controls. This type of approach was interesting to the younger generation. So now we are more focused on stores selling children’s products.”

Although the price is still undetermined due to the complexity of the device, Aitpayev and his team are ready to engage in negotiations to provide instructions and make calculations.

“At the beginning, we are planning to sell several prototypes of our technology to check its effect on sales and level of interest, as well as self-promotion in social networks. The first experience is very important, as a successful demonstration of the product will have a great impact on its further development and selling price. That’s why we are making so many tests inside the university before the product’s release.”

In addition to advertising, Aitpayev also sees a fit for his product in medicine and education.

“Opportunities exist for this project of interactive technologies not only in marketing but also in medicine and the education sector. This technology can be used in any educational institution. Starting from kindergartens, it can be used for the mental and physical development of children; also in specific educational fields like biomedical science and engineering, which involve physical action. For people who suffer neural development disorders that are characterised by impaired social interaction and communication, the technology could be used to develop special therapy with immersion into virtual reality,” he said.

Aitpayev decided to use retail as a test because it covers all ages and categories and takes up a huge segment of the market of any country. After testing in retail, he said, “we will start to integrate this system into the medical and education sectors and I hope that after 5-10 years this technology will be improved and you will be able to see it in all sectors of our life.”