ASTANA, Sept. 26 – The Ukrainian and Kyrgyz prime ministers joined for the first time on Sept. 25 the prime ministers of Kazakhstan, Russia and Belarus for a meeting of the Eurasian Economic Council at the level of heads of governments here. 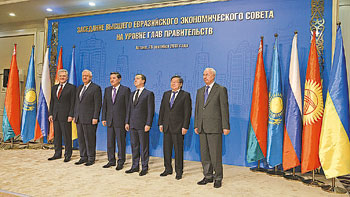 The Eurasian Economic Council is the regulating body of the Customs Union and Single Economic Space between Kazakhstan, Russia and Belarus. Kyrgyzstan and Ukraine have expressed interest in joining that union.

Kyrgyzstan, which announced its intention to join the Customs Union in 2011 at the meeting of the Interstate Council of the Eurasian Economic Community in St. Petersburg, proposed at the Sept. 25 meeting to establish a special institution or development fund to assist countries that want to enter the union, but whose economies are less developed. The proposal was made by Kyrgyzstan Prime Minister Jantoro Satybaldyev.

And in May, head of the Eurasian Economic Commission (EEC) Viktor Khristenko told reporters that the roadmap for Kyrgyzstan’s accession to the Customs Union should be developed by the end of 2013. Khristenko explained that Kyrgyzstan is now eligible to receive information about changes taking place in the frames of the Customs Union.

Ukraine has also expressed interest in joining the Customs Union, but does not have the necessary support of Customs Union founding member Russia because of Ukrainian plans to partner with the European Union. The Ukrainian government plans to sign an association agreement with the European Union and create a free trade area with Europe in November. Unlike Belarus, which sees no challenge to its economy after Ukraine’s accession to the EU, Russia opposes simultaneous Ukrainian membership in the EU and the Customs Union.

Russian Prime Minister Dmitry Medvedev has said that it will not allow Ukraine full Customs Union membership following the completion of Ukraine’s association agreement with the EU. Russia will support, however, allowing Ukraine to have customs union observer status.

During Sept. 25 gathering, the prime ministers discussed challenges and projects for further developing the Customs Union and the Common Economic Zone, as well as the formation of the Eurasian Economic Union.

At the end of the meeting, Kazakhstan Prime Minister Serik Akhmetov and EEC Board Chairman Khristenko held a press briefing. Akhmetov told reporters that the Custom Union will continue to develop its integration process, which will incorporate a basis for the formation of the Eurasian Economic Union.

“An important result of today’s meeting is the signed agreement on civilian passenger aircraft and combine harvesters that will be imported into the customs territory of the Customs Union,” the prime minister said.

According to Akhmetov, this document will allow the three current Customs Union countries to develop economic sectors, such as air transport, agriculture and industry.

The prime ministers also approved the results of the previously used mechanisms of arrangement and distribution of duties that took place in 2011 and 2012.

“The joint collaboration in these areas is a clear indication of the high level of integration between our countries and the willingness to continue efficient partnership,” Akhmetov concluded.

Khristenko noted that the deeper the integration between countries the more complex are integration’s related issues. But, he said, all issues can be resolved through dialogue.

“Mutual trade between our three countries has increased during the last seven months by 3.6 percent – it’s a small amount, but if you compare it to how the export of non-oil goods to third countries changed, you will see that it dropped by 8.6 percent. This proves that the common market is the source of growth of the manufacturing sector, which is very important for the members of the Customs Union,” Khristenko said.

He also commented on the process of preparation of the Treaty of the Eurasian Economic Union, saying that all 600 exceptions and limitations have to be addressed by January 2015.

“I can say that about 300 barriers are already put on the agenda in terms of its definition and time to address them. And this is extremely important because the removal of the barriers and restrictions is not just a tribute to economic freedom, but the source for the growth of our economies,” he said.

Akhmetov added that he felt the Sept. 25 meeting had yielded positive results and that member countries will continue to strengthen the Customs Union and Common Economic Zone.