By Alina Usmanova in National Overview on 9 October 2013

ASTANA – The eighth Kazenergy forum opened in Astana on Oct. 8 and will contain panels discussing issues of future energy, Eurasian perspectives, developing youth capabilities, the role of women in energy and more. 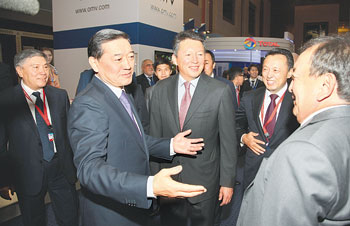 PM Serik Akhmetov (c) and other officials converged for the Kazenergy forum.

Opening the forum, Prime Minister Serik Akhmetov of Kazakhstan read welcoming remarks by President Nursultan Nazarbayev to the participants of the forum.

“The [Kazenergy] dialogue platform over these years has turned into a bright event both for Kazakhstan’s oil and energy sector representatives and for the international partners working in our country,” the president’s message said.

“The start of the Kashagan project can certainly be considered a victory for technical progress and a benefit of the joint efforts of the leading world companies. Kazakhstan is not limited by this project; geological exploration is one of the priorities of industrial development of Kazakhstan,” Akhmetov said.

He also noted that the energy branch is the basis of the country’s economy and reminded participants that over a short period, oil extraction had increased threefold, to the level of 80 million tons per year, and while gas production has increased more than fivefold, to more than 40 billion cubic metres per year.

The main direction of forum discussions will address the formation of a new energy system and its key tendencies, challenges and perspectives; trends inthe development of global energy; scenarios for the development of the energy complex as well as the role of the Eurasian region in creating a sustainable energy future.Issues will be discussed in panels called “Conventional energy industry: the era of decline or the transformation of the industry?,” “New technologies in energy: from the dream to reality” and “Perspectives of future energy in the conditions of regional integration.”

The forum will consider the impact of economic cycles on the global energy market; shifts in centres of supply, consumption and transport of energy resources; perspectives on low-carbon developments in the Eurasian region; issues of stimulating the development of innovative technologies and financing future energy in the conditions of economic instability.

The plenary session saw many statements about the need for all energy sources to be used together, rather than pitted against each other. Former Prime Minister of France Francois Fillon said, “We have entered the multiple energy century,” but also that “whether we like it or not, the oil century will go on longer than forecast.”

The need to balance the coming shift in demand engendered by development and population growth in Asia was a key point of discussion, as was the need for long-term investment in oil and gas development along with renewable energy. “The era of easy oil is over,” Minister of Oil and Gas of Kazakhstan Uzakbay Karabin noted. Amid acknowledgements of acute ecological stresses on the horizon, the need for long term conventional energy plans and increasing investments in the face of an explosion of demand was a key message.