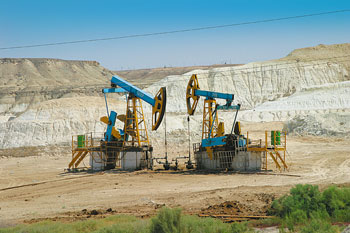 The discussions came during the Kazakhstan International Oil and Gas Exhibition (KIOGE) held at the Atakent Exhibition Center. The annual exhibition and conference, taking place in early October over the last two decades, drew nearly 500 companies from more than 20 countries, including such major energy sector players as KazMunayGas andits subsidiaries, China National Petroleum Corporation, the Caspian Pipeline Consortium and Tengizchevroil.

Among the major outcomes of the event was the signing of a memorandum of understanding between KazMunayGas and international energy project management firm Schlumberger meant to optimize activities at many of KazMunayGas’ oil fields.

Also on the conference’s agenda were discussions on the use of innovative technologies for geologic exploration, oil production and oil transportation. Conference participants also focused on the continued use of local Kazakhstan entities in the development of the country’s energy sector.

British Ambassador to Kazakhstan Carolyn Browne, one of more than 50 speakers, noted that about 100 British companies are working in Kazakhstan in cooperation with 1,600 local product suppliers.

European Union Ambassador to Kazakhstan Aurélia Bouchez said during the conference that EU states are the largest investors in Kazakhstan and trade relations and cooperation in energy security are dynamically developing. She also praised the initiative of Kazakhstan President Nursultan Nazarbayevto move Kazakhstan towards a green economy and Kazakhstan’s efforts to make its mining industry more transparent.

KazMunayGas Deputy Chairman Kurmangazy Iskaziyev also told the conference that Kazakhstan has approved a $23 billion project to expand production facilities at its Tengiz oil field. The project will include the construction of a plant and several wells meant to increase the field’s oil production from 26 million to38 million tons a year, saidIskaziyev.

KIOGE is the largest annual oil and gas exhibition in the Caspian region.Since its launch in 1993, the eventhas become a platform to present new products and address energy, oil and gas related issues in Kazakhstan and the region.KIOGE 2013 was sponsored by the Ministry of Oil and Gas of the Republic of Kazakhstan, KazMunayGas, the Almaty City Administration, the Union of Oilfield Service Companies of Kazakhstan (Kazservice) and diplomatic missions of participating countries.