By Artur Abubakirov in International on 9 October 2013 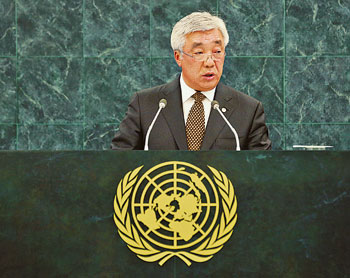 Foreign Minister of Kazakhstan Erlan Idrissov speaks at the general debate of the 68th session of the UN General Assembly.

During the meetings, issues on further developing and deepening cooperation between Kazakhstan and the UN were discussed. In particular, the sides focused on the issue of establishing a UN Regional Centre with headquarters in Almaty to coordinate all UN agencies activities in the region. Ban Ki-moon thanked Kazakhstan’s leadership for their contribution to nuclear non-proliferation and disarmament activities, noting the country’s principal role in this area. He praised Almaty’s hosting of two rounds of talks on Iran’s nuclear programme. “I hope Kazakhstan will go on contributing to the solution of this issue,” the UN secretary general said.

Idrissov also discussed the establishment of a regional hub for international organisations in Almaty as well as a new format of interaction between Kazakhstan and the UN Development Programme (UNDP) with UNDP Administrator Helen Clark. Clark expressed her satisfaction with the organisation’s activity in Kazakhstan and emphasised her readiness to continue discussing these matters.

The foreign minister also met US Deputy Secretary of State William Burns and discussed bilateral cooperation and global and regional security, as well as other developments on the international agenda. They discussed the Commission on Scientific and Technological Cooperation between Kazakhstan and the US, which was launched earlier this year. Burns thanked Kazakhstan for its efforts in helping to normalise life in Afghanistan and hosting the negotiations on Iran’s nuclear programme.

During his New York visit, Idrissov had talks with his counterparts from European countries Albania, Bulgaria, the United Kingdom, Hungary, Macedonia and Portugal; African countries Angola, Gabon, Guinea and Sudan; Arab countries Bahrain and the United Arab Emirates as well as Canada, Guyana, Ecuador, Cuba and Grenada from the Americas and the Caribbean.

A key item on the agenda of bilateral talks was Kazakhstan’s candidacy for a non-permanent seat on the UN Security Council for 2017-2018. The Kazakh minister emphasised that the membership in the Security Council is not a matter of prestige, but a chance for Kazakhstan to bring new ideas and approaches to the U.N. “Kazakhstan has accumulated certain experience in strengthening international and regional security. We make our contribution to food and energy security. Kazakhstan is a leader in nuclear security and non-proliferation,” Idrissov said.

He asserted that if elected to the Security Council, Kazakhstan as well as other members will contribute to the maintenance of international peace and security and support efforts to reform and transform the Security Council, aiming to convert it into a more representative and transparent body, able to effectively counter new challenges and threats.

On the sidelines of UN General Assembly session, the Kazakh minister continued his bilateral meetings with foreign partners. During the meeting with Foreign Minister of Iran Javad Zarif, concrete agreements on further cooperation between Kazakhstan and Iran were reached.

The talks in New York resulted in the signing of several agreements. Following talks with Foreign Minister of Philippines Albert del Rosario, a memorandum of understanding regarding the establishment of political consultations, designed to increase cooperation between Kazakhstan and the Philippines, was signed. The parties also came to an agreement on the development of trade and economic cooperation.

Following a meeting with Ecuadorian Foreign Minister Ricardo Patino, the two countries signed an agreement to mutually waive visa requirements for their citizens. Kazakhstan citizens will be able to stay for 30 days without a visa in Ecuador now. The document is an important step in fostering cooperation in trade, business and tourism between Ecuador and Kazakhstan.

Idrissov also held talks with colleagues from Egypt, Jordan, Columbia and Slovakia. Following meetings, the state and prospects of bilateral cooperation were discussed, as well as the issue of supporting Kazakhstan’s candidacy for non-permanent membership in the Security Council. Kazakhstan’s Security Council candidacy was also a main topic of the informal meeting between Idrissov and the ministers of foreign affairs of the Group of Small Island Developing States and the African Regional Group. The participants of the event were briefed on the contribution of Kazakhstan to ensuring global and regional security.

In addition to bilateral meetings, the Kazakh minister also attended the ministerial meeting on facilitating the entry into force of the Comprehensive Nuclear Test-Ban Treaty and the ministerial meeting of the UN Alliance of Civilisations Group of Friends, where he reiterated Kazakhstan’s position on key international issues. At the annual meeting of the Organisation of Islamic Cooperation (OIC) Council of Foreign Ministers, Idrissov called on his foreign colleagues to support Kazakhstan’s initiative on establishing a food security office of the OIC in Astana, sign its charter and foster the adoption of a resolution.

Idrissov expressed his gratitude to the Turkish delegation, whose nation is currently chairing the CICA, for its contribution to the development and consolidation of the conference and emphasised the importance of the fourth CICA summit, which will provide an opportunity to evaluate the results of the recent four years of cooperation and to set up new plans for the future.

While noting the growing role and importance of Asia in both global policy and economy, Idrissov emphasised the growing challenges in the food, water and energy security. “So that this century can become the Asian Century, we need to cooperate on the security agenda in order assess our potential and reduce tension. Therefore, CICA activity is more important than ever,” he said.