By George D. Gleboff in International on 9 October 2013

NEW YORK, Sept. 30 – Kazakhstan has strongly condemned the use of chemical weapons in Syria and called for earliest ending to the conflict there, while it also urges all nations to engage more actively in nuclear disarmament processes, calls for strengthening the UN Human Rights Council, proposes Almaty as a UN regional diplomacy hub and seeks international support for its candidacy for the UN Security Council membership for 2017-18.

These were the key messages delivered by the country’s Minister of Foreign Affairs Erlan Idrissov in his address to the United Nations General Assembly on Sept. 27.

Call for soonest end to “bloody conflict in Syria” 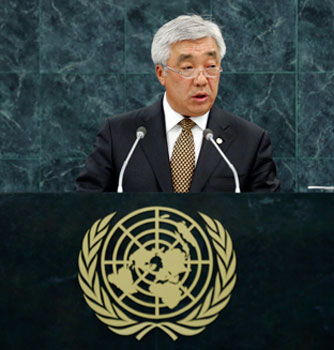 Starting out by saying that the world situation has deteriorated over the past year, Idrissov stressed: “Never before has the need been more compelling for equal partnership and participation of all member states, based on mutual respect and norms, as embodied in the principles of the United Nations Charter and International Law. The United Nations, by the power invested by its member states, thus stands out as our unquestioned leading entity on the world stage.”

Turning immediately to the conflict in Syria, Idrissov said “Kazakhstan strongly condemns the use of chemical weapons in Syria as confirmed by the findings of an independent investigation by the UN Mission and regards it as a crime against humanity.”

He went on to pledge strong support for a UN Security Council resolution on Syria that would stipulate strict compliance to a concerted decision on the elimination of chemical weapons in that country and the conduct of regular inspections of this process. Such a resolution was subsequently adopted by the UN Security Council.

“We express our hope that the accession of Syria to the Convention on the Prohibition of the Development, Production, Stockpiling and Use of Chemical Weapons and on their Destruction as well as placement of such weapons under international control will preclude the possibility of their repeated use and contribute towards the end of a longstanding and bloody conflict in Syria,” Idrissov said. “We call for earliest possible convening of an international conference on the

settlement of the conflict in Syria with the aim to end violence and determine Syria’s political future through dialogue and reconciliation.”

Stressing that the current situation of the nuclear disarmament process also does not encourage confidence in a more peaceful future, Idrissov has urged more action by all the nations to reinvigorate the process.

He reminded the audience that by closing the Semipalatinsk nuclear test site in 1991 and renouncing the fourth largest nuclear arsenal, Kazakhstan had contributed to a nuclear-weapons-free world and has “a special moral authority to champion the cause of nuclear abolition.”

Kazakhstan’s foreign minister, who also addressed the UN High Level Meeting on Nuclear Disarmament one day earlier, said “the Non-Proliferation Treaty (NPT), which remains the cornerstone of the nonproliferation regime, must reach full universalization with strict implementation of national obligations in accordance with the three fundamental pillars of the Treaty: non-proliferation; the peaceful use of nuclear energy; and disarmament, in a balanced way.”

“We call on all countries outside of the NPT, possessing nuclear weapons, to sign the Treaty, and for state parties not to withdraw,” Idrissov added.

“The entry into force of the Comprehensive Nuclear-Test-Ban Treaty should become an important catalyst of the non-proliferation process and the effective implementation of the NPT. We urge those countries that have not yet done so, to sign and ratify this important instrument,” Idrissov continued adding that the UN General Assembly resolution, instituting 29 August as the International Day against Nuclear Tests, matches the goals and objectives for the entry into force of the CTBT.

Idrissov further noted that the Treaty on the Establishment of a Zone Free of Nuclear Weapons in Central Asia (CANWFZ), which came into force in March 2009, “is an important contribution of the Central Asian countries to international and regional security.”

“Kazakhstan welcomes the willingness of the P5 countries to hold a dialogue on the Additional Protocol and to provide the negative assurances in the nearest future,” the foreign minister said.

Kazakhstan also supports the early convening of a conference on the establishment of a Middle East zone free of weapons of mass destruction, under the aegis of the UN, until the end of 20l3, and calls upon all states in the region to actively cooperate to make this important deliberation possible, Idrissov said.

To take further actions to eliminate the nuclear threat, President Nursultan Nazarbayev had earlier proposed the adoption of a Universal Declaration for a Nuclear Weapon Free World, which will be “an important step towards a Nuclear Weapons Convention, and thereby achieving a nuclear-weapon-free world,” Idrissov added. “We count on the member states to finalize and submit a draft resolution to the General Assembly,” he said.

Idrissov also highlighted the role Kazakhstan has played in the search for the settlement of the situation around the Iranian nuclear programme as a host for two rounds of negotiations in Almaty in 2013.

“Specific agreements have yet to be reached, but we are confident that a mutually acceptable outcome is possible. We believe that concrete actions by Iran to ensure the transparency of its nuclear programme will advance the settlement of the problem rather than relying on sanctions alone,” the foreign minister said on the day when news broke out about the telephone conversation between the presidents of the United States and Iran, the first direct contact between the leaders of these countries in 34 years.

At the same time, Idrissov expressed grave concern about the situation with North Korea’s nuclear programme.

“Attempts to deal with the secret development of nuclear weapons in violation of international obligations cannot be justified by any circumstances. At the same time, Kazakhstan is against a military solution of the problem, since we are convinced that only the peaceful settlement of the crisis, within the framework of the six party talks, can ensure peace and stability in Northeast Asia,” he said.

Regional integration will help Afghanistan, CICA to be further developed

Kazakhstan is also interested in the sustainable and stable development of Afghanistan through its transformation into a politically stable and economically steadfast state, Idrissov said, bringing up the decisions of the Istanbul process and Almaty forum in 2013. “We support the rapid integration of Afghanistan into regional structures for its speedy social and economic recovery,” he added.

The Asian continent is transforming itself into a global power house for the 21st century, with its sahre of more than 57% of global GDP, and this trend is expected to continue. However, this growth could be jeopardized by an aggravation of existing conflicts, illegal migration, drug trafficking, territorial claims, separatism, religious extremism and terrorism.

“To cope with these challenges, Asia needs a regional security architecture. Kazakhstan, as the initiator of the Conference on Interaction and Confidence Building Measures in Asia (CICA), is striving to rnaximize forums for joint decision-making on security and cooperation in Asia,” the foreign minister stressed.

Stating that Kazakhstan was strongly committed to the fundamental principles of international law and the respect of human rights, Idrissov called for appropriate budgeting and strengthening of the United Nations Human Rights Council.

“Kazakhstan as a multi-national and multi-confessional country facilitates a comprehensive dialogue between civilisations, within the United Nations, and various international and regional organizations,” Idrissov added. The Congress of Leaders of World and Traditional Religions, which Kazakhstan convenes every three years, contributes to global and regional security, by garnering the spiritual and moral potential of world religions to facilitate international conflicts, and to prevent confrontation between confessions and cultures.”

Additionally, at the initiative of Kazakhstan, the General Assembly proclaimed 2013-2022 as the International Decade of the Rapprochement of Cultures. Its official inauguration was held in Astana in late August.

“Kazakhstan calls on member states to actively participate in the events of this Decade and to support synergy between the Alliance of Civilizations and the Congress of Leaders of World and Traditional Religions,” the foreign minister said.

He then turned to the global financial and economic crisis, which he said led to the conclusion that the world needed a common policy of global governance, as highlighted in the General Assembly resolution on Global Economic Governance. It recognized the value of cooperation and interaction between the United Nations and regional and subregional groups. Idrissov also mentioned the First World Anti-Crisis Conference, held as part of the Astana Economic Forum in May 2013 in Astana.

On Rio+20, Idrissov stressed Kazakhstan’s transition to a “green” economy, as well as its voluntary contributions to reducing greenhouse gas emissions and investing in low-carbon emissions.

In addition to a national concept for the transition to a “green” economy, Kazakhstan has also initiated the transition to a “green” economy in Central Asia within the framework of the regional Intergovermnental Commission on Sustainable Development. And on Sept. 30, Astana hosted the International Conference on “Green Bridge” Partnership Programme where the programme was institutionalized through a charter.

Meanwhile in New York, Kazakhstan also offered to fully finance the establishment of UN regional diplomacy hub in Almaty and announced its candidacy for the Security Council membership for 2017-2018.

“Kazakhstan acts as a geographical and political bridge between North and South, Europe and Asia. For this reason, it is ideally suited to foster cooperative initiatives in this vast regional landscape,” Foreign Minister Idrissov said as he outlined the reasoning for establishing a regional UN diplomacy hub in Almaty.

He listed challenges and threats to regional security in Central Asia, with poverty, unemployment and growing disparities in development seen as factors contributing to mass population movements, instability, ecological degradation, drug trafficking, religious extremism and terrorism, “all of which must be addressed through regional cooperation.”

“Such collaboration can be facilitated through the creation of a United Nations multi-country centre in the city of Almaty, as a hub for promoting regional development, security and stability. Kazakhstan is ready to bear all the costs for the construction, equipment and establishment of this large UN Office,” Idrissov said.

He went on to present the case for Kazakhstan’s election as a non-permanent member of the UN Security Council for 2017-18.

“The experience that we have gained from recently chairing a number of regional and international organizations and fora such as the OSCE, OIC, CICA, CIS, SCO, CSTO and others, gives us unique access to a wide and diverse range of experiences and approaches to solving international security problems addressed by the UN Security Council,” the foreign minister said. “If elected, Kazakhstan will unfailingly be united with others to contribute to the maintenance of international peace and security, and will support efforts to reform the Council, transforming it into a more representative and transparent body that can effectively address the full range of challenges and threats facing the world today.”