ASTANA, Sept. 27 – A discussion at the Sept. 25 12th session of the Secretariat of the Congress of Leaders of World and Traditional Religions focused on the role and prospects for development of the congress, as well as issues of education, cooperation and religious tolerance. 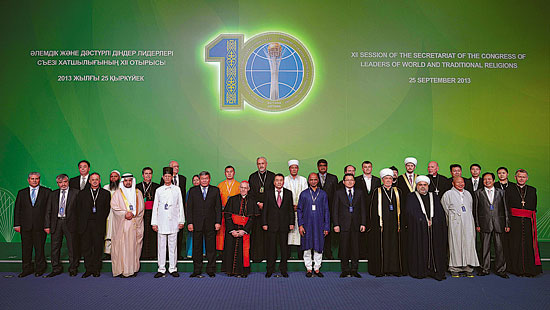 Issues of education, cooperation and religious tolerance were high on the agenda of the 12th session of the Secretariat of the Congress of Leaders of World and Traditional Religions.

The meeting also commemorated the 10th anniversary of the first Congress of Leaders of World and Traditional Religions and noted that all tasks from the fourth congress had now been implemented.

“The Congress is an effective dialogue platform, acknowledged by the world community. We are open to new ideas in structuring the culture of tolerance and accord. During the 11 sessions of the secretariat, we have discussed the development and simplification of the international dialogue and the results it has achieved,” Mami said. “At the four congresses, we have discussed the role of religion, international ethics and the role of religious leaders in sustainable development. In order to promote the interreligious dialogue, we launched the Internet portal, G-global.” He also noted that movies and books commemorating the decade of the congress had been issued.

Mahmoud Fahmi Hegazi, rector of the Kazakh-Egyptian-Islamic Nur University, noted that particular attention should be paid to educational issues.

“If we need the world to know what the Congress is doing, two or three messages on that should be given to the secretariat to be published. People should know that the leaders of their religions participated here and how many countries participated in the event. That should be done because people want to see information not long after the Congress, but immediately,” he said.

Homi Dhalla, president of the World Council of Cultural Heritage of Zarathushtra in India, also spoke about education, reminding participants of the words of Nelson Mandela: “Education is the most powerful weapon which you can use to change the world.”

Yang Ki Hoon, representative of Chogechon Buddhist Organisation in Central Asia, expressed gratitude to President Nazarbayev and to the chairman of the congress. He discussed the promotion of the Congress.

“Necessary communication channels should be created, informational work should be done, necessary employees need to be involved in the activity. It’s not right that our forum relies on Kazakhstan financially. We have nongovernmental organisations that have enough funds for financing our activity,” he said. It was also noted that all obligation to foster religious dialogue should not fall to Kazakhstan, but that religious leaders should take responsibility for promoting dialogue, transparency and religious freedom.

Also on the agenda was the cooperation of the secretariat with international structures to promote dialogue among religions and civilisations. As head of the secretariat, Mami has held a number of meetings with international organisations and reached agreements at high levels on issues of practical cooperation. The Astana forum interacts with a number of specialised institutions of the United Nations and international dialogue platforms including the Alliance of Civilisations and others.

Majed Abdulaziz Al-Turki was pleased to hear about the efforts toward cooperation and noted that establishment of a commission of the secretariat would find support. Metropolitan Emmanuel of France noted that cooperation with other institutions worldwide will be important. “The cooperation seems very practical,” he commented.

Another important aspect of the discussion was cooperation in the field of human rights and education. It was noted that some religious organisations have publishing houses or other means of promoting the congress’s activity worldwide. Their involvement in strengthening cooperation with international structures would be relevant.

Bishop Gennady of the Russian Orthodox Church in Kazakhstan stressed that the project is to be implemented as part of the activity of the congress. “We may create a small textbook of tolerance written in simple language, where representatives of various religions could give dogmatic justifications for mutual cooperation and peace needed by the religious youth. We need to create some methodological material and, using it, hold a course of tolerance within educational institutions.”