By Michelle Witte in Business on 11 September 2013 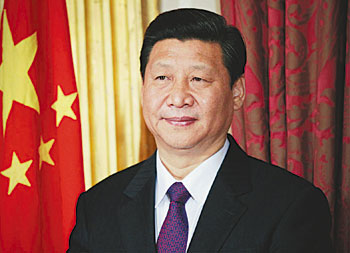 He also emphasised that China has no intention of interfering in the internal affairs of Central Asian nations and seeks only enhanced cooperation and support in embracing what he called the region’s “golden opportunity of development.”

Xi’s visit came on the heels of his appearance at the G20 summit in St. Petersburg, where he also spoke of creating closer partnerships and easing trade barriers. There, he said G20 countries had a duty to work more closely together to shore up the world economy, and pushed for a more open world economy and less individual protectionism.

In Astana, he continued the theme of partnership, in this case along what he described as a new Silk Road.

“Both China and Central Asian countries are at a crucial stage of development, with unprecedented opportunities and challenges … Our strategic goals are the same, which are to ensure sustained and stable economic development, build prosperous and strong nations and achieve national revitalisation,” Xi said. Across-the-board cooperation would be needed to turn regional good relations into the drivers of sustained growth and mutual benefit, he continued.

An Economic Belt Along the Silk Road

“To forge closer economic ties, deepen cooperation and expand development space in the Eurasian region, we should take an innovative approach and jointly build an economic belt along the Silk Road,” Xi said. “This will be a great undertaking, benefiting the people of all countries along the route. To turn this into a reality, we may start with work in individual areas and link them up over time to cover the whole region.”

Of improving communication at the highest levels, Xi said, “Countries should have full discussions of development strategies and policy response, work out plans and measures for advancing regional cooperation through consultation … and give the policy and legal green light to regional and economic integration.”

Speaking of connectivity, Xi said the SCO was currently working on a major transportation agreement. “If signed and implemented at an early date, it will open up a major transportation route connecting the Pacific and the Baltic sea,” he said. Building on that, he said, the region should actively discuss the best ways to improve cross-border transportation and infrastructure and work toward a transport network that would connect all of Asia. 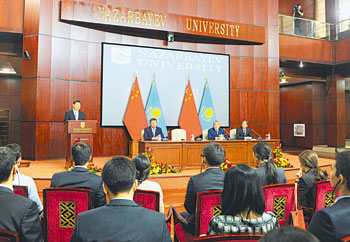 In proposing enhanced monetary circulation, Xi mentioned China’s recent success with settling trade in local currencies with Russia. “There is no reason not to share this good practice with others in the region,” he said. “If our region can realise local currency convertibility and settlement under current and capital accounts, it will significantly lower Central Asian costs, increase our ability to fend off financial risks and make our region more competitive economically in the world.”

Finally, Xi said, “Amity between the people holds the key to good relations between states. To have productive cooperation in the above mentioned areas, we need to have the support of our people. We should encourage more friendly exchanges between our people to enhance future understanding and traditional friendship and to build strong public support and a solid social foundation for regional cooperation.”

As a step in increasing this understanding, Xi announced his country would provide 30,000 government scholarships to SCO member states and invite 10,000 teachers and students from Confucius institutions to study in China. He also invited 200 faculty members and students from Nazarbayev University to attend summer camp activities in China next year.

Over the last decade, China and its largest oil company, CNPC, have invested in numerous oil and gas pipelines that distribute energy throughout the region, providing an alternative to Russia’s Gazprom pipelines and fuelling accusations that China aims to displace Russian soft power in the region.

Xi took pains to stress that China has no desire for regional domination. “We respect the development paths and domestic and foreign policies chosen independently by the people of every country,” Xi said. “We will in no circumstances interfere in the internal affairs of Central Asian countries. We do not seek to dominate Central Asian affairs or establish any sphere of influence.”

Instead, he said, regional countries should create an atmosphere of harmony and support.

“To render each other firm support on major issues concerning core interests such as sovereignty, territorial integrity, security and stability is the essence and an important part of China’s strategic partnership with Central Asian countries. We will deepen trust and cooperation with Central Asian countries bilaterally and within the SCO to combat the three forces of terrorism, separatism, extremism, as well as drug trafficking and transnational organised crime to create a favourable environment for the economic development and well-being of people in this region.”

In his speech, Xi also stressed China and Kazakhstan’s long history and praised the leadership of Kazakhstan’s President Nursultan Nazarbayev in facilitating the economic growth of the country and the increased well-being of its people.

After his speech, Xi took questions from the audience. Asked about environmental challenges, Xi said environmental issues would be higher on his nation’s agenda in the next 30 years, and that pressure to safeguard the environment came from within China. He noted the environment would be an issue for any country in a process of modernisation.

During his visit, President Xi was named an Honorary Professor of Nazarbayev University.