Divisions of the traffic police and patrol guard service (PGS) will be merged as a part of the Universal Policeman project by November 2013. 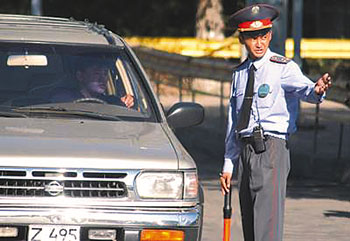 The merging of units of the patrol guard service and traffic police will increase their mobility as well as density and coverage of protected areas.

“Given the positive results of the experiment (on merging traffic police and the PGS) by November this year we intend to merge all units of the patrol guard service and traffic police. The draft resolution of the government has already been prepared,” Kalmukhanbet Kassymov, Minister of Internal Affairs of Kazakhstan, said as he addressed members of the Committee on Legislation and Judicial Reform of the Mazhilis (lower chamber of the Parliament) visiting the Ministry of Internal Affairs.

He said that the experiment on merging these two police forces was conducted in line with instructions from President Nursultan Nazarbayev and began in April of this year in two oblasts – Pavlodar and Zhambyl.

“The results of the experiments that were initiated by the president were beneficial,” Kassymov said.

According to him, the result of the experimental merger of the services is that the squads have become more mobile, their density and coverage of protected areas increased, and further training is to be held. In this case, such universal policemen will learn traffic rules, norms of administrative laws and administrative proceedings, both in road safety and in public safety.

Universal police officers will receive enhanced powers and will be able to provide prompt assistance in all types of accidents. According to the Interior Ministry, they will not reduce the staff, except for those who want to leave on their own.

Chairperson of the Independent Automobile Union of Kazakhstan Eduard Edokov believes, however, that the merger of services is being carried out too early.

“First, we need to retrain MIA employees, and then move towards uniting them,” he said.

“In addition, for the success of such a reform, it would be advisable to hold another certification,” he said, recalling re-certification of law enforcement and security agencies, which started in the country in 2012.

According to Edokov, merging the services should not be done mechanically. All new employees should be provided with special equipment and trained on how to use it.

Traffic police officers believe the impending reform is a positive development. Anything can happen on the road, there are not just car accidents. There are often clashes between victims and perpetrators. Traffic police officers have no weapons. Universal policemen would be better positioned for tackling both road and security issues.

According to the Institute of Political Decisions, the initiators of the reform were guided by reforms in the Republic of Georgia, where by means of such a merger, corruption on the road has been completely eradicated. In this case, the total number of police was reduced, new staff was employed, and their salaries were raised. In addition, patrol partners constantly change in order to prevent corruption.

Specialist of the Institute of Political Solutions Yerlan Smailov believes the reform is a good thing, but needs improvements.

“We consider it appropriate to postpone the merging of police structures until 2014, at least in large cities like Almaty and Astana, it takes time to analyze experiment data from the field,” he said.

The minister agreed that without making drastic changes to the Criminal Procedure Code, as well as the efforts of the court and the prosecution, it is not yet possible to fix the activity in a proper way.