By Nadezhda Khamitova in Nation on 11 September 2013

The UN International Day Against Nuclear Tests was established in recognition of the closing of the Semipalatinsk nuclear test site on Aug. 29, 1991 by decree of Kazakhstan President Nursultan Nazarbayev. The stamp honoring that day was produced in conjunction with the president’s office and depicts President Nazarbayev, the then Russian President Dmitry Medvedev and U.S. President Barack Obama and heads of a number of foreign countries at the Global Nuclear Security Summits in Washington and Seoul held in 2010 and 2012.

The ceremony introducing the stamp took place at the Ministry of Foreign Affairs and included Kazakhstan Foreign Minister Erlan Idrissov and KazPost Chairman of the Board Arken Arystanov.

“In September 2006, Kazakhstan, along with other countries in the region, signed the Semipalatinsk Treaty, which declared Central Asia a zone free of nuclear weapons. Therefore, August 29 is a tipping point for the world and has lessened the danger of a nuclear apocalypse. We believe that over the years and decades, awareness of the critical importance of this action by the world community will only grow. We would like to thank KazPost for the initiative it took to issue a special postage stamp dedicated to this significant event, which reflects our commitment to global disarmament,” said the minister.

“It is truly a global event. I am very pleased that it is not the first time that in cooperation with the Ministry of Foreign Affairs we have developed stamps on different occasions. I think it will be a momentous event, which will be emphasized not only among philatelists, but also among ordinary citizens. At the same time, the same ceremony is being held in Almaty. I congratulate you on this occasion,” Arystanov said at the ceremony. 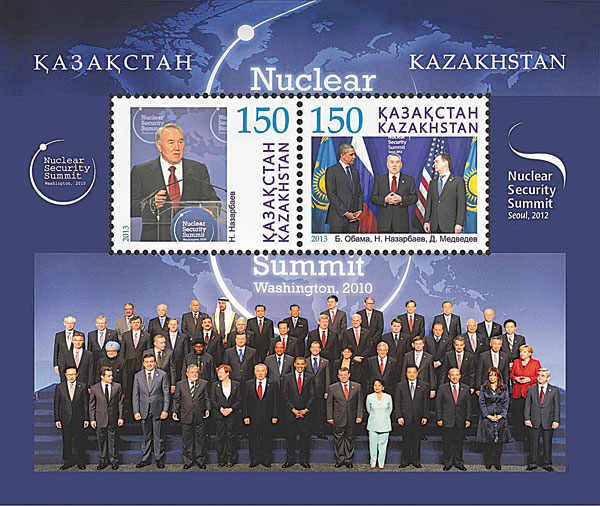