The conference was held at Gumilyov Eurasian National University (ENU) and was organised by the Centre for Research in Rural and Industrial Development and the Centre for Military and Strategic Research and supported by the Ministry of Education and Science of Kazakhstan along with the Embassy of India in Astana. 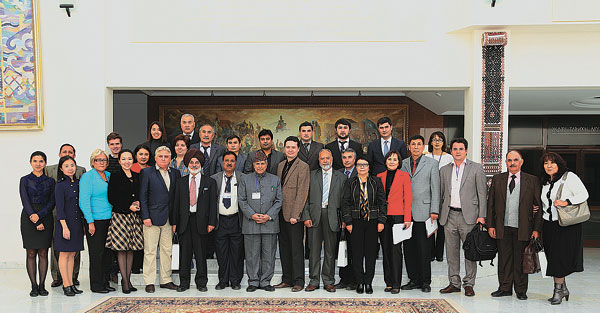 In the opening speech, Sydykov said the conference was timely, as according to the Strategy 2050 announced by President Nursultan Nazarbayev, economic rapprochement among Asian countries should be implemented in the coming years. “Since 1992, Kazakhstan and India have held regular meetings on a high level, concluding critical agreements in economic and political spheres as well as establishing relations in the spheres of agriculture, health service, space programmes and the peaceful use of atomic energy,” he said. The rector called relations between the two states stable and profitable for both sides, but with a lot of potential to be further developed.

Different approaches to building partnerships with Central Asian countries and connecting the region with South Asia were presented by guest professor from New Delhi, Anil Kumar Patnaik. In light of the growing interest of the three great powers, Russia, China and the United States, in the region, several strategies were developed and are now being implemented in Central Asia, he said.

“The United States has developed a new Silk Road strategy in order to build a link between India, Afghanistan and Central Asian countries and avoid Iran. The American government believes that after the withdrawal of the U.S. troops from Afghan cities, the surrounding countries will help to stabilise the situation. Moreover, the military bases that the U.S. is now trying to establish in Uzbekistan and in the future in Kyrgyzstan will secure permanent control,” Patnaik said.

The Chinese government sees the region as a bridge to Europe. According to Patnaik, China is interested in establishing a transport corridor between East and West. “India actually can benefit from this strategy, as this will help Indian goods to reach Central Asian markets through China,” he added.

Russia is interested in promoting Eurasian integration. The Customs Union is the first step in implementing this strategy and uniting all five countries of the region under the Russian umbrella, according to Patnaik. “Russia believes in the necessity of building a transport corridor from India and Iran through Central Asia and this is where the collision of interests of the Russian and American governments takes place,” he said adding that India doesn’t want to join any of these strategies. It is trying to look beyond Central Asia, benefiting from bilateral agreements with Central Asian countries as well as with the three great players in the region. Kazakhstan, Uzbekistan and Tajikistan are strategic partners of India and are now proposing new ways of cooperation; for example, a new project to build a pipeline from Shymkent to India, which was recently discussed at a high level meeting.

Professor Mirzohid Rakhimov from the Institute of History at the Academy of Sciences in Tashkent, discussed how Uzbekistan sees its future cooperation with India. The professor mentioned partnership opportunities in textile production, the growing number of education programmes, especially IT programmes, that have been implemented successfully in Uzbekistan over the years and transport communication. “I want to highlight the fact that Uzbekistan as well as other Central Asian countries are strongly supporting India’s permanent membership in the UN Security Council, and we should understand this as a sign of trust and friendly relations between our states,” Rakhimov concluded.

At the end of the panel discussion, Malhotra expressed his impression of the ENU and its students. “I’m so happy to realise that so many young, vibrant and confident students are studying here. I’m very glad to announce that our institution is ready to launch a new exchange programme that will provide an opportunity for 25-30 young people to go to study in India.” He added that details needed to be worked out between the heads of the two educational institutions, but he is already looking forward to seeing ENU students in Chandigarh.

Kazakhstan-Indian relations have a deep history rooted in political, economic and cultural cooperation. Nevertheless, geographical distance has slowed the evolving relationship. Right now, the two countries are looking to further develop their traditional spheres of cooperation as well as find new ones.

India and Kazakhstan’s growing interaction is demonstrated by the visit on September 19th to Astana by a group of travellers from India as part of their great Central Asian expedition. The expedition was organised by the Indian Central Asian Fund (ICAF) and supported by the Embassy of India in Astana. The meeting was held at the national Academic Library, where Sydykov met with Indian scientists to hear their impressions and expectations of their journey. Many people of different occupations are taking part in the expedition: scientists doing research on Central Asian issues, journalists wanting to make a documentary about Central Asia and its people in order to uncover a new part of the world for Indians, representatives of oil and energy companies looking for new contracts as well as doctors and economists. All of them said they were delighted by Kazakhstan, especially Astana, and expressed their willingness to come back again.

The expedition will continue until the end of the month. The travellers will visit Karaganda, Balkash and Almaty, then cross the border and discover the life of other Central Asian countries.