By Michelle Witte in International on 11 September 2013

ASTANA – Director General of the International Atomic Energy Agency (IAEA) Yukiya Amano visited Kazakhstan on Aug. 22 and 23 to further promote the establishment in the country of a low-enriched uranium (LEU) fuel bank under the auspices of the IAEA and to personally see the potential site for the bank. 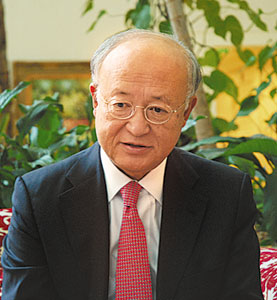 So far, there have been more than 10 technical IAEA missions to Kazakhstan as part of the process of establishing the bank. However, Amano told The Astana Times in an exclusive interview, at this stage he cannot say when the project will be implemented. Earlier, Erlan Idrissov, Kazakhstan’s foreign minister, said the legal issues related to the establishment of the bank should be resolved by the end of 2013.

Amano first met Idrissov and Prime Minister of Kazakhstan Serik Akhmetov in Astana on Aug. 22 before flying to Ust-Kamenogorsk for his first visit to the proposed site of the LEU bank at the Ulba Metallurgical Plant there. “It is very important for us to visit the site and to have firsthand information. We are looking forward to seeing the site and talking with the people there,” he said prior to the site visit on Aug. 23.

“This is not an easy task, it has various aspects and we need to address all of the aspects—safety, security, legal aspects, procurement—very carefully. It will take time.” As a former bureaucrat, he said, he is too cautious to give any kind of time line for the process. “I can assure you that we are making progress; we have a very firm commitment from Kazakhstan. We are doing our best and we are strengthening our efforts, but at this stage we cannot say by when [any process will be concluded].”

The bank is intended to serve as a last-resort source of low-enriched uranium suitable for power generation for IAEA member states. They will be able to request bank reserves only if they are unable to buy uranium on the open market. There is hope that this will act as a disincentive for individual nations to build expensive, dangerous enrichment facilities of their own, which could also be used to create weapons-grade materials.

Contributions of more than $150 million by various states and organisations, including the U.S., the EU, Norway, the United Arab Emirates and the Washington-based Nuclear Threat Initiative nongovernmental organisation, will cover the initial estimated operational and procurement costs of setting up and launching the bank. Kazakhstan would bear the maintenance costs of the bank and will see material expenditure, not profit, from the project.

Commenting on this in April, Chairman of the Nuclear Energy Committee of Kazakhstan’s Ministry of Industry and New Technologies Timur Zhantikin said, “We have pledged that we are the country that is doing its best to enhance the international non-proliferation regime. This is how we are doing it.”

There are some concerns about the bank’s possible environmental and other impacts, though Zhantikin has called any environmental or health impact “practically zero” and noted the plant’s 60 years of high safety standards.

The opportunity to host the bank is a significant one, said Amano. “This LEU bank has some very important meanings … It has a very important implication for non-proliferation and also it contributes to the sustainable use of nuclear technology. This is a highly visible project and the international community is awaiting the establishment of the LEU bank. I think the local community and people should be proud of that.”

Current challenges for the nuclear community

Since the disaster, the director general said the IAEA has strengthened the culture of nuclear safety worldwide. “Six months after the accident, we adopted the action plan to enhance nuclear safety and now it is being implemented. When I visit countries … everywhere I see the strengthening of safety of nuclear power plants.” Examples of this, he said, were additional mobile diesel generators on sites, hookups positioned at high levels in case of floods and improved visibility and positioning of emergency equipment.

Amano also said nuclear power will continue to have a place in a world transitioning to renewable energy sources. “Despite the Fukushima Daiichi accident, the expansion of the use of nuclear power continues, because nuclear power can mitigate the negative impact of climate change,” he said.

Ongoing tension with Iran is another challenge for the nuclear community. Amano called Iran’s cooperation “not sufficient,” but said the IAEA was committed to resolving the dispute through dialogue. Iran is currently involved in two channels of nuclear dialogue, one directly with the IAEA and the other through the other P5+1 (the five permanent members of the U.N. Security Council plus Germany) talks, the most recent round of which was held in Almaty.

Not just a watchdog

Amano also took pains to point out that the IAEA is more than just a nuclear watchdog. “Our work on nuclear safety and security is very important, but it’s not the only work. Our extensive work in the peaceful application of nuclear development is also very important.” He cited controlling cancer, detecting and controlling underground water sources, prolonging the life of agricultural products and eliminating vermin from food as areas in which nuclear technologies are being used for peaceful purposes. In this region, animal health is another area benefiting from nuclear technology, particularly in diagnosing and controlling foot and mouth disease. “You can bring a very small, portable piece of equipment using nuclear technology [to a farm]. You can send vets to the farms to detect and diagnose the disease; then you can control the disease at a very early stage. We have done it in Mongolia,” Amano said.

“We are contributing to attaining the UN Millennium Development Goals (MDGs) in a unique way,” he continued. “People believe that nuclear is always expensive, complicated, heavy, dangerous. That is not true. We have very small, light, simple, not very expensive equipment that can help the welfare of people.”

Regarding Kazakhstan’s nuclear history and the upcoming U.N. International Day Against Nuclear Tests on Aug. 29, Amano said the IAEA was playing a role in eliminating nuclear weapons through its activities in disarmament, non-proliferation, security of nuclear materials and the creation of nuclear-weapons-free zones. He noted that Kazakhstan, which joined the IAEA and acceded to the Nuclear Non-Proliferation Treaty (NPT) in 1994, was a very important, supportive partner. “You have ratified and are implementing major conventions … on the peaceful use and safety and security of nuclear technology … We are very much satisfied with the level of cooperation between Kazakhstan and the IAEA.”

“Kazakhstan made a very important decision to join the NPT as a non-nuclear weapons state,” Amano added. “It is a good example for many other countries … I highly esteem and appreciate the efforts of Kazakhstan and I would also like to make the point that the IAEA is playing an important role in the pursuit of a world free from nuclear weapons.”

vision for the development of the railway sector and, above all, for high-speed railway transport. Cooperation with Kazakhstan is important for us, and we will do everything to continue its development for the benefit of the both sides,” Oriol said.