It is widely known that President of Kazakhstan Nursultan Nazarbayev, as head of state and a great politician and in full measure realising the increased role of religion in the society, put forward the initiative of holding the first Congress of Leaders of World and Traditional Religions in Kazakhstan’s capital, Astana. Previous organisers of similar events had always been limited to representatives of leading religions and confessions. Among other similar events aimed at establishing inter-religious dialogue were the meetings of representatives of world religions and confessions held in Assisi, Italy, in October 1986 and January 2002. 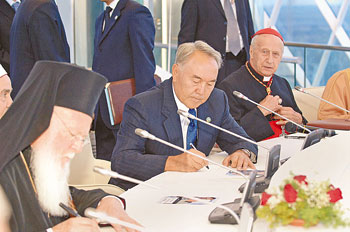 The main and paramount objective of the Congress is the promotion of global dialogue among traditional religions which is vital in today’s world.

Through Nazarbayev’s initiative, dialogue took place on themes of mutual interest between leaders of world and traditional religions. Having direct, accurate information from each other opened the doors for mutual cooperation and is contributing to overcoming such negative manifestations of our time as violence, fanaticism, extremism and terrorism.

The first congress in 2003 addressed religious dialogue as a concept and as a means of settling disputes, as opposed to violence and terror. The aim of the congress was to search for universal guidelines in world and traditional religions and create a permanent international inter-religious institute to facilitate religious dialogue and coordinate decisions. Participants also conducted an open exchange of opinions on the role of religion in the modern world, the universal nature of the main moral values relating to any religion and problems resulting from the religious grounds of conflicts. Other issues raised were the necessity of increasing inter-religious harmony and respect for each other and the ability to learn the traditions of other people.

In Astana, a decisive step has been made towards concord; toward establishing and strengthening a constructive dialogue between civilisations, confessions, countries and peoples. It was noted that inter-religious dialogue is one of the key means of social development and improving the well-being of all peoples.

At the first congress, the delegates came to the conclusion that the religious dialogue should be profound and be based on dialectics. The first congress adopted a declaration in which the spiritual leaders described joint actions on safeguarding peace and progress for humankind and in service of a stable society as the basis of a harmonious future. The success of the event was consolidated by the decision of the first congress to hold such an inter-religious forum on a regular basis: no less than once every three years.

The congress, which has become a special and memorable event, has demonstrated the urgent need for cooperation and unity among world religions in the name of a peaceful life for all world citizens. The idea of the congress was supported by such influential peace politicians as former UN Secretary General Kofi Annan, former US President George Bush, former UK Prime Minister Margaret Thatcher, former President of China Jiang Zemin, former President of South Africa Nelson Mandela, former President of the Soviet Union Mikhail Gorbachev and others.

Addressing the fourth congress in 2012, author of the initiative on convening the Congress of Leaders of World and Traditional Religions, President Nazarbayev, noted that “the congresses have, to a certain extent, contributed to preventing the world from falling into the abyss of the ‘clash of civilisations.’”

The participants of the Congress of Leaders of World and Traditional Religions are united in their recognition of the divine design of human beings, their dignity and inalienable rights, and their commitment to peace and harmony as the only valid choice for the future of humanity.

They are deeply grateful to Kazakhstan for its noble initiative of promoting a dialogue among religions and cultures aimed at enhancing mutual respect, understanding and cooperation among believers, peoples and states for the common good of humanity. They also have great respect for President Nazarbayev, author of the incomparable and well-intentioned event.

In these difficult times, religion is one of the most important and influential means of addressing contemporary social issues as well as of achieving comprehensive peace and prosperity.

We are really glad that religious people as well as politicians and public figures intend to respond to the moral and spiritual challenges presented by extremists and terrorists.

People belonging to different religions and spiritual traditions recognise mutual respect, understanding and harmony as common values that are encouraged through inter-religious dialogue. They provide hope that in the second decade of the 21st century the human community will continue to work towards faith, friendship, solidarity, justice and creative activity. We should take full advantage of the world’s diverse religions and cultures.

Indeed, the four congresses held so far have shown that this feared clash of civilisations is not inevitable. The spiritual leaders who have participated in all Astana’s forums this past decade have vividly demonstrated that dialogue, mutual understanding and respect are strong forces on the planet and are capable of ensuring harmony and security, as well as the well-being and peaceful coexistence of all cultural and religious communities and nations. Against the backdrop of globalisation and contemporary challenges and threats, the Astana congress is a pioneering initiative aimed at promoting dialogue among religions and civilisations and has made a significant contribution creating a culture of mutual understanding and respect in the world.

The author is Supreme Mufti and Head of the Spiritual Board of Muslims of Kazakhstan.